Today’s Haaretz newspaper (9/11/2010) revealed that a construction project of 800 housing units west of the settlement of Ariel is being promoted. Peace Now: “there are approx. 13,000 housing units like the 800 in Ariel that were approved in the past and can be implemented today without any further approval of the government, and the settlers are eager to implement them. Unless the government declares a total freeze on the construction, including the private initiatives, it will be a group of private extreme settlers to determine Israel’s policy in the West Bank”.

What’s in the Plan?
Those unites are part of the City Plan No. 130/3/1 that was approved at the early 1990’s.
The plan is for a new neighborhood outside of the built up area of Ariel, at a site that if built, it will complete the blocking of the Palestinian municipality of Salfit from both sides: Ariel from the North, and the new neighborhood from the West. 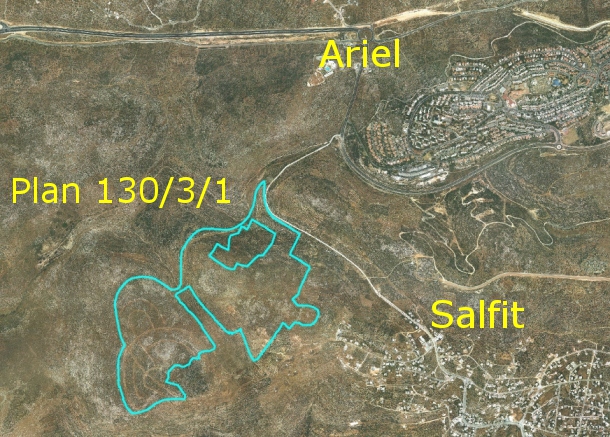 What’s New about the Plan?
According to the report in Haaretz, the land was claimed to be owned by two different private Israeli investors, and about one month ago, the court has decided the final ownership. The court’s decision paves the way for the investor to start the implementation of the construction. All the investor has to do is to prepare a program for each of the planned buildings and to get a construction permit from the municipality of Ariel. This step, if completed quickly, can take about one year.

Is There Governmental Involvement in the Plan?
According to the current law and procedures in the territories, permission from the Defense Minister is required for two main phases: In the planning phase and in the phase of marketing the land.
The planning phase of the land in Ariel finished in the early 1990’s and received all the necessary permits and approvals. As for the land sale phase, approval from the Minister of Defense is required only in cases where public land (also known as “State Land”) is involved.  In cases where private land is involved as in the case of the 800 new housing units in Ariel, no approval from the Defense Minister is needed for the marketing of the land and the developer can turn directly to the local authorities to get his final permits.
According to Peace Now count there are aprox. 13,000 housing units that can be built without any further approval by the government, based on old plans that were approved in the past and on land ownership that was already granted to private people or settler organizations.