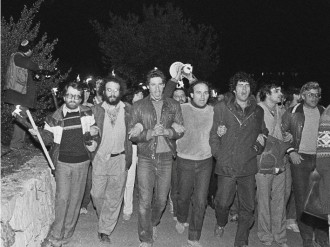 We waited tensely along with the entire country for the publication of the conclusions of the Kahan Commission.

This time, we estimated, a generous peace initiative toward the Palestinians, will strengthen the forces in their midst who want to progress toward a compromise solution. Extremism on the part of Government would strengthen the extremists on the other side, and will reduce the chances of reaching a sane solution.

With the publication of the conclusions, on February 8, we were ready; Kahan Commission criticized the Prime Minister, Foreign minister and chief of staff, but full responsibility was not on their heads. However, it demanded the dismissal of the Defense Minister and the two officers who were responsible for the slaughter.

Begin’s response was tentative; he did not immediately announced that he accepted the recommendations, and made do with determining a special Cabinet meeting to discuss the issue.

It was clear to us that if the government does not accept the conclusions, this could turn Israel from a democratic state of law of the state with semi-violent political forces that ignore the law. Everybody understood that we had reached an important crossroads decision, it was time to determine the fate and character of the state for years to come.

To strive to bring about the dismissal of Sharon a public presence was needed, and therefore we announced a demonstration march to the Prime Minister’s Office, Jerusalem. Departure point was Zion Square, where we gathered the next day, immediately we were surrounded by a hostile crowd, which began hitting, pushing and spitting on us from all sides.

We soon realized that these were not just any passersby’s who had spilled out from the shopping mall next door, but an organized group of supporters of the right, who arrived specifically to harass the demonstrators.

Author Shulamit Hareven wrote of that night “As the demonstration proceeded towards the Prime Minister’s office, we were subjected to Shouts, whistles, beating, a lot of beating. The police hardly respond, only here and there push back the crowd with a single punch … the marchers advance slowly, being beaten constantly. Amiram has a cigarette butt thrown in the face, Anat was beaten hard, another attempted to put out a burning fire torch on the face of Ziv, an artist from the Israel Museum … the marchers are restrained, we do not respond to the blows. The strongest prevailing feeling here today is that the street is on the brink of civil war, and we must do our part to prevent it at all costs. “

My memories of those moments are not different; I remember running around between the lines, appealing over and over to the police officer in charge, Eitan Katz, asking him to intervene – but he was helpless. Hamashbir building stood before Kahane and his followers, and the march down the Bezalel Street became an unexpected journey in a sea of hatred: both sides of the road were people who spat, cursed, shoved and beat the protesters, who held hands and tried, their best, not to be drawn, and not lose a member of the rows. We only fully comprehended the meaning of things two hours later.

After the crowd had already left the rally, only the main activists remained outside  the Prime Minister to gather up  and collect the signs.

Suddenly the sound of the explosion momentarily paralyzed us all, the first to recover was Abu, realizing that a grenade exploded. Death threats, which accompanied us all the way to the rally, were not idle threats.

“They threw a grenade. They threw a grenade.” The shock descended on us with these words hard to describe – though we knew all along that a serious struggle would  arouse anger among sections of the public, but with all that we never imagined – even for a moment – the possibility of physical harm to our people. Public debate in Israel has never reached the rank of such violence, and after the explosion – it was still was hard to believe that it happened.

The feeling was of a nightmare, but the sirens of ambulances rushed to the scene was horribly real. JYehshus Shakedi and Adi Levy were seriously injured, Avrum Burg, Zeev Shavit , Yoav Asia were slightly injured, and they were taken to Shaare Zedek Hospital. Only hours later, we learned that among the casualties was also someone who was murdered –  Emil Grunzweig.

Beyond shock, beyond the pain, I felt great anger mainly: Emil was the victim of a wild incitement on the right, which throughout the war had avoided a public debate dealing with our arguments, and instead chose to de – legitimatize our positions.

For example after our June protest, MK Michael Kleiner claimed we get the money to finance our operations from Saudi Arabia, proposed to the Knesset a law prohibiting the existence of demonstrations during the war. It tried to impose liability for failure in Lebanon. Other claims that have chilling connotations, such as “stab in the back of the nation”, were also later expressed by more senior officials; Even Begin expressed his views that this is treason.

Maybe for him it was the vague words, but the public took them seriously, and a year later, when police caught the Avrushmi, throwing the grenade, we were not surprised to discover that the man worked for a while in the metal workshop in the settlement of Ofra, the ideological stronghold of Gush Emunim.

Avrushmi was a product of manipulation and propaganda, were leading right-wing leaders.

After throwing the grenade were members of the government and supporters of the war began to repent – and talked about the “terrible and shocking tragedy,” Sharon condemned the “insanity behind the attack,” the Yesha Council issued a statement which claimed that its members stunned “the terrible tragedy that occurred last night against demonstrators expressing their opinions in a legitimate peaceful protest.

Condemnations against “verbal violence” from the Yesha Council, for example, seemed to us hypocritical. “The grenade was thrown not because of some words that are not pretty … it was thrown as a result of incitement to murder,” wrote Amnon Rubinstein in Haaretz a few days after the event.

For the first time I started to consider the possibility that our call to go protest can endanger the participants. Yet I was certain that we must not, under any circumstances, allow the disaster happened to weaken the movement or the willingness to act on the street, it seems to me that this was also the reaction of most active.

After throwing the grenade, there were demonstrations for which there was agreement that “not to take the kids”, but I do not recall anyone expressing concern or disapproval by the action. On the contrary, it seemed that it increased determination, and to prevent acts of violence against demonstrators, we started to concentrate on bringing trained skilled ushers to deal with acts of violence.