This morning the Army Radio reported that Minister of Defense Ya’alon authorized the declaration of 1,545 dunams south of Jericho as state land. This land has been overtaken by settlers years ago for the purpose of agricultural cultivations. According to the Army Radio the declaration will be published in the coming weeks. This is the largest declaration since August 2014, when 4,000 dunams in the Etzion Bloc area were declared as state lands, resulting in an international storm of criticism.

Peace Now: Continued land confiscation by the Netanyahu government is a diplomatic catastrophe. The government’s decision is another step on the way to destroy the possibility for a two state solution. Netanyahu is being dragged by Naftali Bennett and begins a silence annexation of area C. 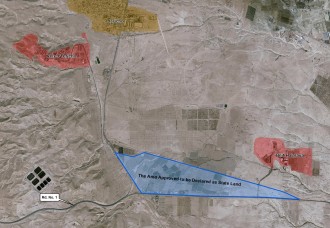 This approval comes after several declarations and confiscations in the last few weeks:

Two orders were signed on 23 December 2015, intended to take over new lands in the Qalqilya region and Qusra region southeast of Nablus:

Expropriation of 25.7 acres for the Nabi Elias bypass in the Qalqilya region

Expropriation order for 25.7 acres (104 dunams) east of Qalqilya, for paving the ~2.5 Km “Nabi Elias Bypass”.  The road is intended to improve the route between Israel and the settlements of Karnei Shomron and Kedumim, by passing the Palestinian village of Nabi Elias.
Officially, the expropriation is intended not only for the settlers, but also for the Palestinian residents of the area.  According to international law, an occupying country may not expropriate resident lands unless it is intended for use by the occupied population.  Applying this method, Israel has expropriated thousands of acres for roads used by settlers and Palestinians, but the construction of such roads considered the travelling needs of the settlers and not necessarily those of the Palestinians.  It is safe to assume that had the roads been planned toward developing the West Bank for the Palestinian residents, the roadmap would be different.

On 18 October 2015, the government decided to promote the pavement of four bypass roads for the settlers, including the Nabi Elias bypass.  The project cost is estimated at 48M NIS and the budget was approved by the Ministry of Finance Exceptions Committee in November.
The main highway (Rte. 55) currently goes through the village of Nabi Elias.  The government states that the road is intended to solve safety issues on the current road.  If safety was indeed a consideration, the government could have solved the problem along the current route, without paving a new road and expropriating lands.  The pressure for paving the new road was exerted by the settlers for whom driving within the Palestinian village is a security issue.
The Palestinian landowners intend to appeal the expropriation, but past experience demonstrates that such appeals are usually dismissed.

In addition, in November 2015, another 30 dunams were declared as state land near the settlement of Karnei Shomron. 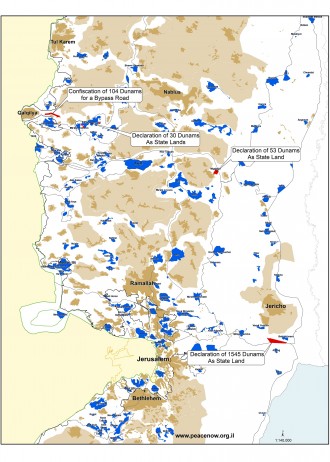