The approval for marketing is the last approval required from the government before the construction in the settlements can start. Following this approval, the Ministry of Housing will publish tenders offering the project for bidding. The winning contractors will be able to start the construction as soon as the get a construction permit from the local municipality, which is a bureaucratic procedure that doesn’t require another approval by the government.

Peace Now: The government of Israel continues to damage the Israeli interest by building in the settlements. The construction in the “Settlement Blocs” is especially harmful, because it is expanding the size of the land that Israel will need to swap with the Palestinians as part of a two states agreement. This construction might create facts on the ground that will make the price of peace much higher for Israel. Only after an agreement that will set final and agreed upon borders, should Israel be allowed to build in the “Blocs”.

For a Summary of the settlement activity since the end of moratorium – click here. 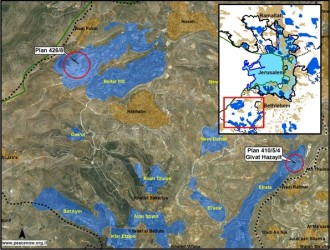