1. The “outposts” are the construction of a mini-settlement on a random piece of land in the West Bank – without receiving any permits or government decision. They are illegal even according to Israeli law! The method of “outposts” is how the settlers have been establishing facts on the ground in the last decade, contrary to the position of the government and without public support.

2. In 2005 settlers began to construct 12 permanent buildings, to replace the caravans, at a place called “the outpost of Hayovel” (1 km from the settlement of Eli). Part of this outpost exists on private Palestinian land, and as a result the state itself issued demolition orders against the construction.

3. Peace Now petitioned the High Court of Justice when the houses were completed and before the houses were populated. Asking that the families don’t move into the houses that were condemned to be demolished – as it would be difficult, after the fact, to remove people from them homes so to return the land to the Palestinian owners. The court agreed and issued an order “nisi” but the order was violated and the families moved into the houses, with the encouragement of the Amana movement and the settler leadership.

4. One year after the petition was submitted, Maj. Roi Klein was killed in the Lebanon War in an act of heroism, when he threw himself over a grenade to save his friends. Maj. Eliraz Peretz was killed in Gaza in 2010 in a battle with Palestinians. Because of the exceptional and tragic circumstances, Peace Now decided to retract its fundamental position and informed the HCJ it would not demand the demolition of those specific two houses.

5. Elements on the right continue to shirk their responsibility: instead of expressing their regret and apologizing to the families that bought the illegal homes with their encouragement, they are aiming their fire at Peace Now and the law enforcement agencies. The settler leadership is accusing Peace Now of being unpatriotic and of hounding the bereaved families out of their own home. Right wing elements are now making cynical political use of this case, proposing the legalization of all of the houses in the outposts through a new proposed legislation amendment in the Knesset.

6. To this day, the IDF continues allowing career officers to move into illegal houses in outposts in the territories, even though it is against the law. By doing so the army instead of upholding the law, and leading as an example to the public – they are encouraging the violation of the law – this is a dangerous precedent for any law abiding country. 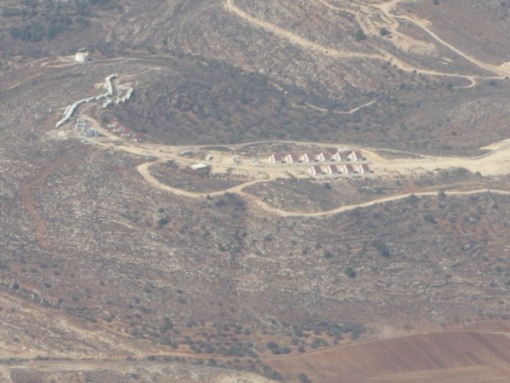