As part of the political crisis around the Ulpana Hill, Netanyahu announced a “compensation package” for the settlers in which 851 new units will be built in disputed areas in the West Bank. According to the announcements new houses will be built in: 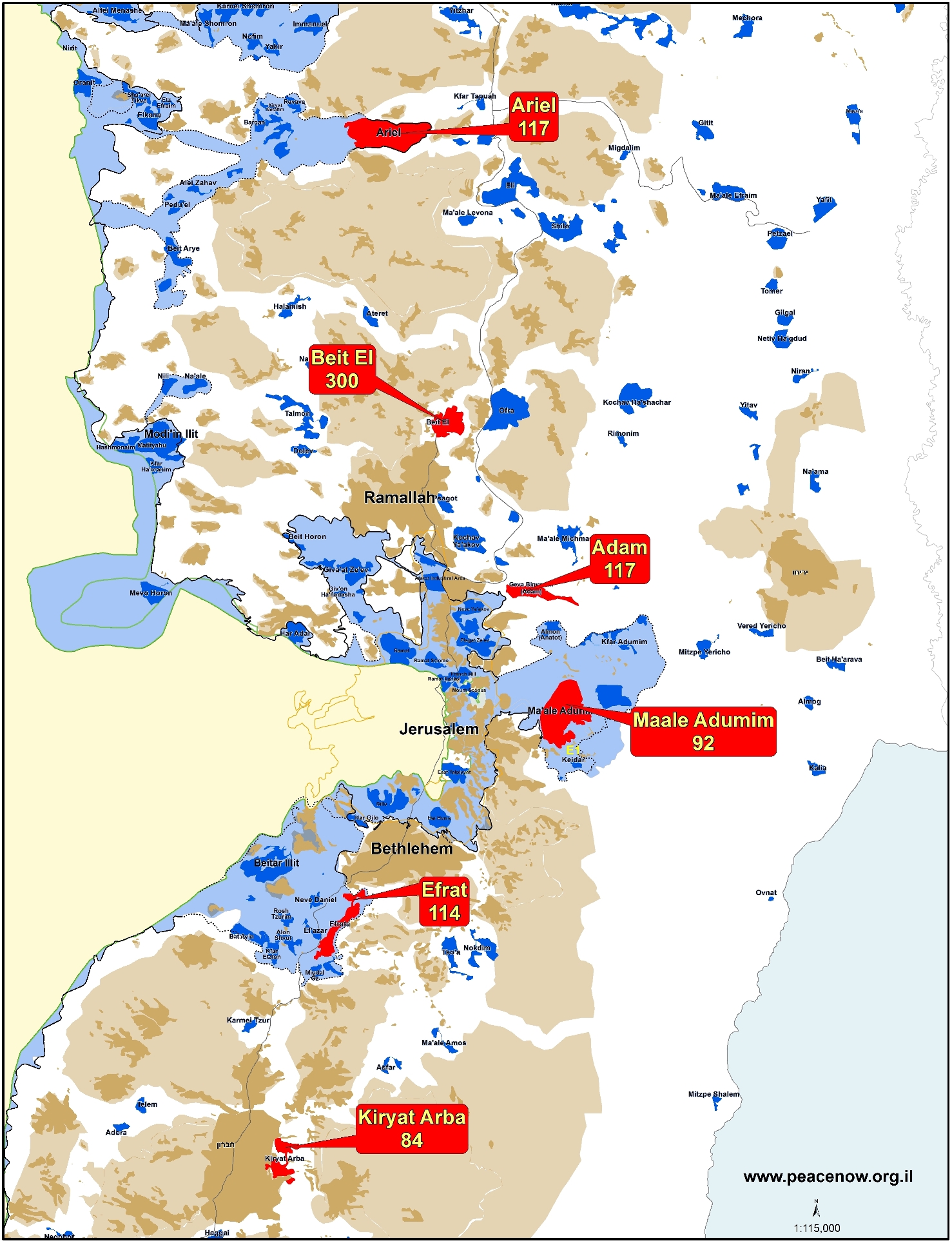 Almost all of the announced construction is located precisely in disputed areas which could prevent the possibility of establishing a Palestinian state alongside Israel. The formal negotiations between Israel and the Palestinians, as well as informal negotiations such as the Geneva initiatiive, have revealed the critical disputed areas that are threatening the viability of the Palestinian state, and in which the construction of settlements could prevent the chance for an agreement.

Most of the announced units (except from that in Beit El) are in settlements in which most of the construction is done through tenders that are issued by the Ministry of Housing. It is most likely that those units are in plans that were already approved in the past, and are waiting for implementation through publication of tenders. When the tenders are issued, contractors will be invited to offer their bids and the winning bid will be allowed to start the construction soon thereafter.

1. Ariel – 117 units – Ariel is one of the most sensitive points in terms of the possibility for a two states solution, as it is very big and important for Israel, and at the same time located 20 km from the Green Line at the heart of the West Bank. CBS Figures show that in the last decade the number of settlers leaving Ariel was greater than the number coming to live in it and its current number of residents is less than 18,000. Nonetheless, on December 8, 2011 the government issued a tender for 277 new housing units in Ariel. On May 22 2012 another tender for 14 units in Ariel was issued. The new 117 units could be a renewal of a failed tender that was published in 2005 for the construction of 117 units at the eastern part of the settlement, but had no bids that were offered at the time. However, the announcement of the government did not include the details of the upcoming construction and the 117 units could be of another area in Ariel.

2. Efrat – 114 units – according to reports in the media, the 114 units in Efrat are for the construction of 114 permanent homes in Givat Hatamar, which is a hilltop 1 km north of the built-up area of Efrat. This is a dramatic expansion of the area of Efrat towards the suburbs of Bethlehem. Like Ariel, Efrat is one of the most disputed settlements that could prevent a two states solution. With 8,000 settlers, Efrat is adjacent to Bethlehem in the south, and is located east of the main highway (60) connecting the southern West Bank with Bethlehem. The future annexation of Efrat to Israel would sever the southern West Bank from Bethlehem. The Netanyahu government began working in recent months to advance plans that were halted for years. On December 8, 2011 a tender was issued for the construction of 40 new housing units in the Givat Hadagan neighborhood. Another tender for additional 213 units in Givat Hazayit in Efrat was issued on December 29, 2011.

Givat Hatamar is now inhabited by trailer homes (caravans). The expected tender will enable the construction of 114 permanent homes at the hill, which is only a few meters away from the houses of the Palestinian village of Alkhadr. 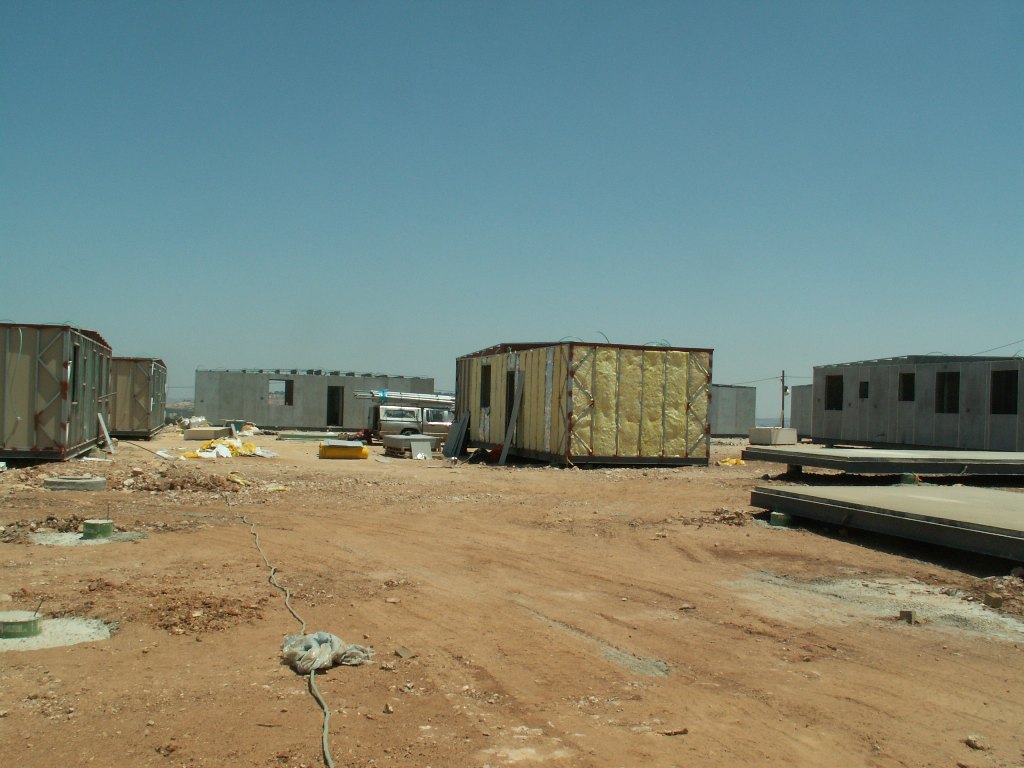 Construction of Caravans in Givat Hatamar, 2008

3. Adam (Geva Binyamin) – 144 units – The settlement of Adam (AKA Geva Binyanin) is located south east of Ramallah, east of the separation barrier and east of the main road from Ramallah to the south of the West Bank. In some of the maps presented by the Israelis in the official negotiations with the Palestinians the settlement of Adam was suggested to be annexed to Israel as part of “a finger” that would include other settlements (Kochav Ya’acov, Beit El and Psagot) all the way up to Ramallah. Those maps were never accepted by the Palestinians.
There are approx. 5,000 settlers living in Adam, and during the last year about 40 new housing units were built in it. The new 144 could be part of the plan that was approved as an alternative for the settlers of Migron and of which the infrastructure work had began in recent weeks. 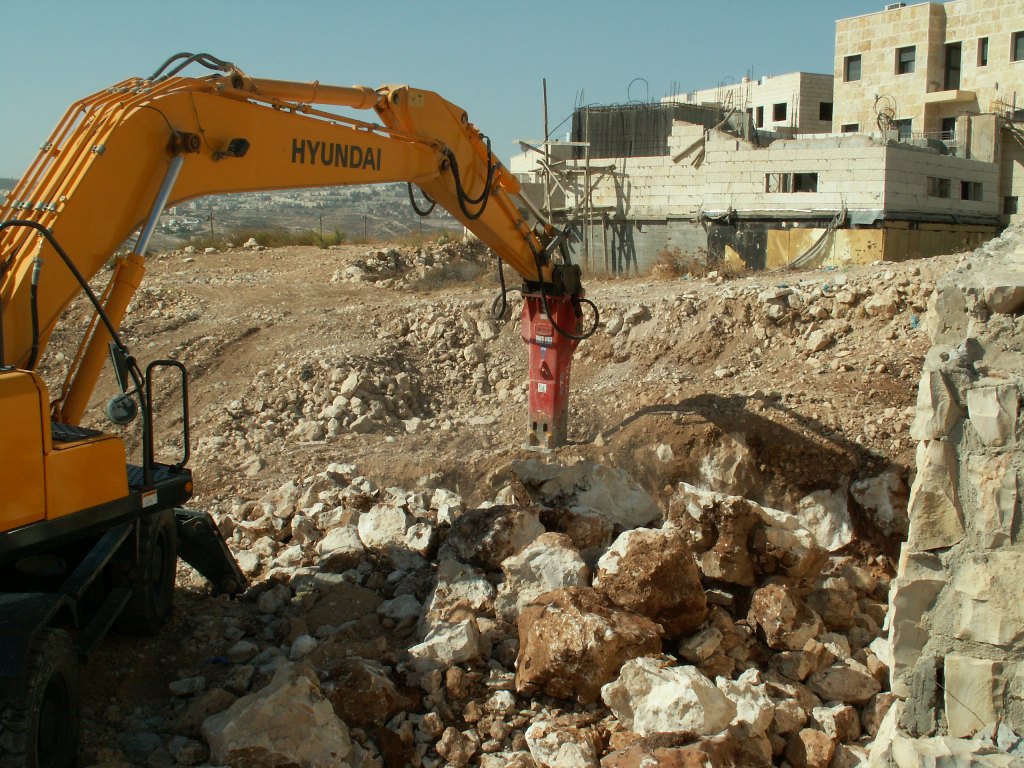 4. Kiryat Arba – 84 units – Kiryat Araba is adjacent to the Palestinian city of Hebron, East of the separation barrier with 7,500 settlers. Kiryat Arba was never considered to be part of Israel and will undoubtedly need to be evicted in a case an agreement.

5. Ma’ale Adumim – 92 units – like Ariel and Efrat, Ma’ale Adumim is one of the most disputed settlements. It is a city of 35,000 settlers, and is considered in Israel as a normal Israeli city that “will never be evicted”. However, it is located at the heart of the West Bank, separating between the North and the South of the West Bank, and closing the potential development of East Jerusalem. 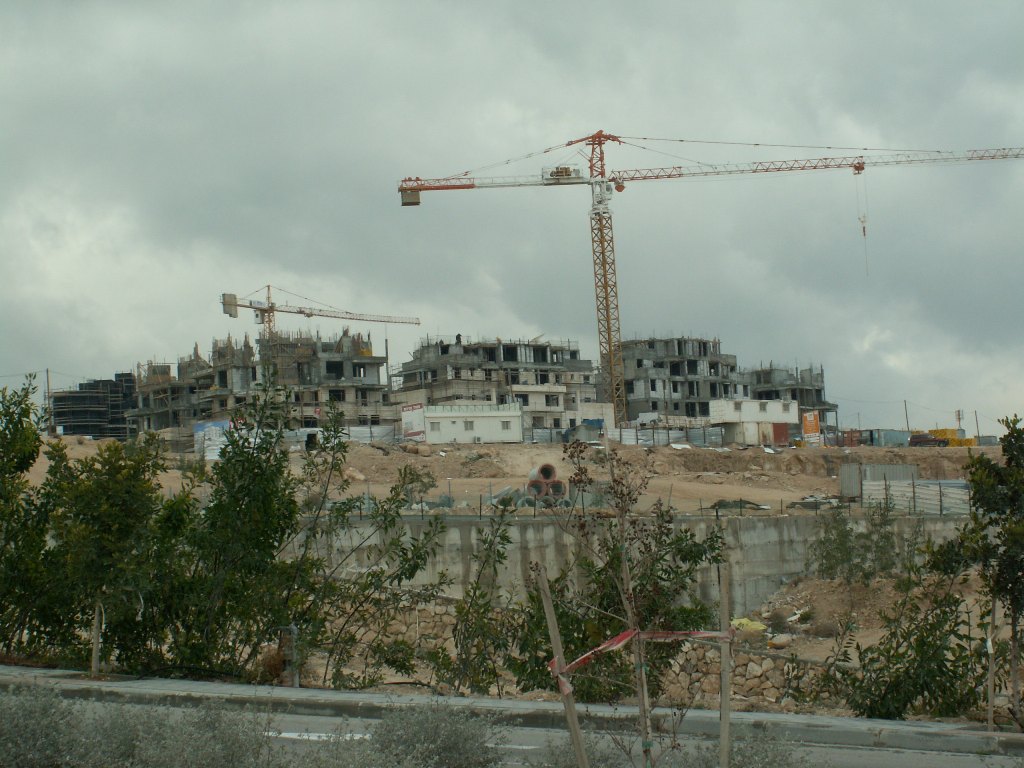 6. Beit El – 300 units – there is no approved plans for such construction in Beit El. In order to build, the government will need to prepare new plans, approve them, and only then will it be possible to allow the construction. This would take years.
In addition, all of the land of Beit El is privately owned by Palestinians which was seized for security needs in 1978 (just before the 1979 court ruling that stopped the use of military seizures as a means to build settlements). The government might face the need to expand the seizure order or to use old seizure orders that were truly used for military purposes in the past, and change the use into settlement. This could be problematic from a legal perspective. Of all of the announced units, the 300 units in Beit El are the most hard and far from being implemented.