Whereas in the rest of the country housing prices are skyrocketing, in the settlements prices are much lower. The government of Israel continues to invest, subsidize and encourage the settlements by investment in building and benefits for the settlers.

* The prices are an average of a selection of transactions conducted in the last few months.

The settlers enjoy benefits in different areas by virtue of their definition as a “development area” (according to the government almost all the settlements are considered “development areas”). In the area of housing the benefits are as follows:

• Mortgage supplement – an NIS 97,200 loan on comfortable terms (4.5% interest) for anyone buying an apartment (who does not have an apartment elsewhere), regardless of their economic condition and aid entitlement points. Additional supplements as part of the relaxation of entitlement criteria.
• 50% funding of development costs of the building project.
• Exempt from tender for land and 69% discount on the value of the land (so that buyers have to pay only 31% of the price of the land). 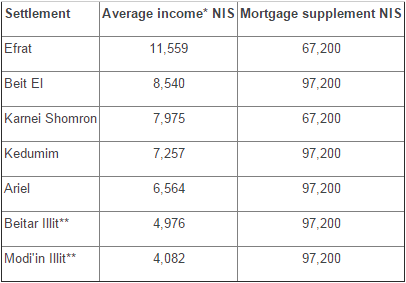 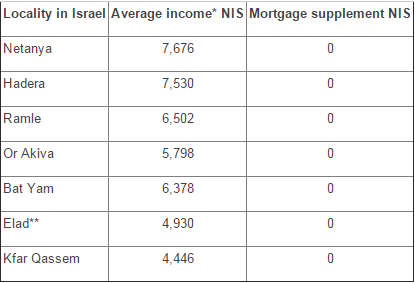 *Average income of self-employed, CBS figures for 2008
**A haredi (ultra-orthodox) locality. For example, the haredi town of “Elad,” in Israel, does not enjoy benefits, whereas the haredi settlement of Modi’in Illit, only a few kilometers away, with the same socioeconomic profile, enjoys extensive benefits.

Funding the local authorities’ expenses: According to the most current figures published by the finance ministry, in 2007 state transfers to the local authorities in the territories were NIS 1,127,455,469 (more than 1 billion and 100 million). That is 8.9% of the state transfers to the authorities that year. At that time, the number of residents in the settlements was 3.8% of the residents of Israel. So the budget transferred to the settlements was more than twice their relative size in the population.

Additional Reading Regarding the Cost of the Settlements:

The Burden of Occupation – A Thorough Research by Adva Center – click here.