As part of the attempts to overcome the Supreme Court’s ruling ordering evacuation of some outposts in the West Bank in 2012, several settler and right wing groups have joined together to pass legislation in the Knesset to legalize the outposts which are slated to be evicted.

In order to promote the legislation they have also launched a media  campaign withs ads and posters depicting MKs and minister who oppose the outposts’ bill wearing fatigues bearing a Peace Now patch, with a caption reading “Member of the Peace Now Eviction Forces.”

Despite the attempt to vilify Peace Now members as enemies of the state, we thank the Settlers for using us in their campaign – as they so clearly show we are the ones leading the fight against the forces out to ruin the country and expect the Cabinet Ministers to stand with us in support for the rule of law and democracy and to ensure that the decisions of the Supreme Court are enacted! 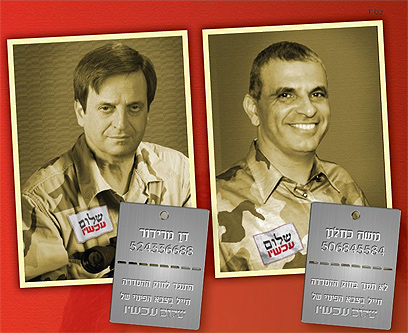