As Israel marks 66 years of independence Ha’aretz daily compiled a list of “66 Israeli women you should know”. Those women are “breaking barriers, defying stereotypes and wielding influence to great effect in the corridors of power and behind the scenes. Each and every one of these outstanding achievers, we believe, is a woman worth watching.” 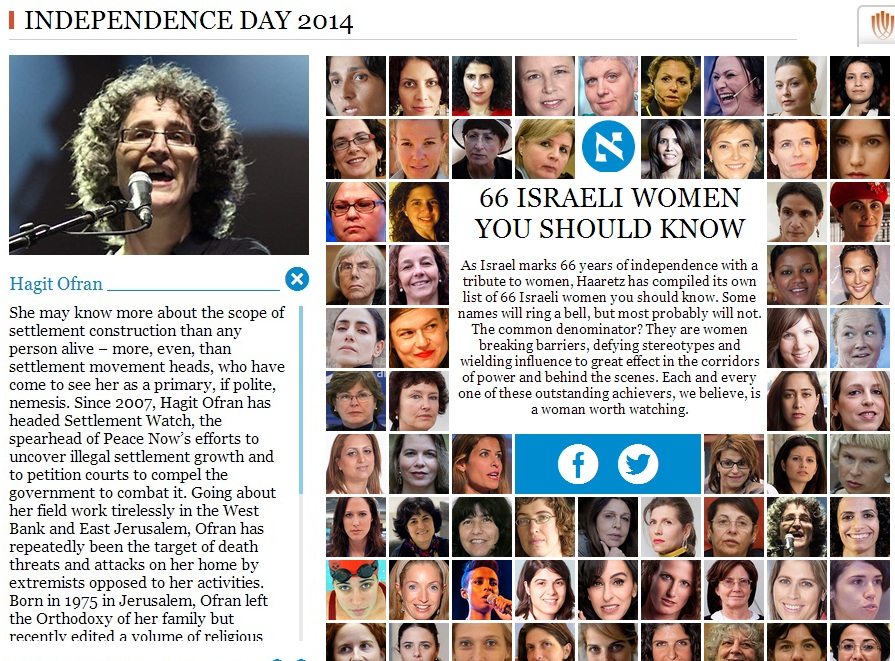 Here’s what they say about our Hagit Ofran:

She may know more about the scope of settlement construction than any person alive – more, even, than settlement movement heads, who have come to see her as a primary, if polite, nemesis. Since 2007, Hagit Ofran has headed Settlement Watch, the spearhead of Peace Now’s efforts to uncover illegal settlement growth and to petition courts to compel the government to combat it. Going about her field work tirelessly in the West Bank and East Jerusalem, Ofran has repeatedly been the target of death threats and attacks on her home by extremists opposed to her activities. Born in 1975 in Jerusalem, Ofran left the Orthodoxy of her family but recently edited a volume of religious commentary by her late grandfather, Israel’s arch-iconoclast Yeshayahu Leibowitz. “There are wonderful people in the settlements who do wonderful things,” she has said, but they are “leading us to a binational state.”