In December of 2010, Peace Now held a conference in Jerusalem for prominent public figures, including ex-politicians, Israeli diplomats, artists and authors. Peace Now presented to the attendees a briefing on the situation of Jerusalem today, and Hagit Ofran (Settlement Watch Director) held a question and answer situation.

The attendees committed to creating a Public Figures Forum that will pressure for an end to settlement expansion by Israel in East Jersusalem, and a creation of the two state solution in the city.

The forum composed its founding principles in the below statement and plans to meet quarterly to plan activities.

There are two national communities living in Jerusalem and they both consider it to be their capital. Since 1967, Israel has striven to create the impression that this there is a single and united Jerusalem. It is time to tell the truth: there is no whole Jerusalem – there is a double Jerusalem: two cities, one, mostly Jewish, in the west, and one, mostly Arab, in the East. The two peoples have been pitted in bloody conflict for more than 100 years. The conflict between the two peoples will be resolved only by agreement between them. One of the focuses of dispute between the peoples is the demand of each side to recognize Jerusalem as its own capital. In order for there to be a peace agreement, it is vital to reach agreement on the borders of the “Jewish” city and the “Arab” city, on the status of the city’s holy sites and on their use. Without such agreement, peace is not possible. Until there is an agreement, until there are negotiations over the arrangements that will be put into effect in Jerusalem between the two peoples, we must not accept unilateral actions intended to prevent the possibility of a peace agreement and a division of the use of the city between the two communities.

Unilateral actions such as the purchase of homes in densely populated Palestinian areas, evicting Palestinians from their homes and replacing them with Jews, constructing buildings for Jews in the Arab neighborhoods and establishing outposts in them, will not only reduce the chances to achieve a peace agreement but already constitute reasons for nationally and religiously motivated hatred, unrest and hostility, and might serve as motives for terrorist attacks. These actions pose a security threat in the present and threaten to prevent the possibility of reaching a peace agreement in the future. Government policy carried out by extreme right-wing elements is turning Jerusalem into a site of conflict instead of calming it down. The government of Israel is responsible for protecting the basic rights and fabric of life of all of the residents of the city, including the Palestinian residents. The policies of discrimination, neglect, house demolition, denial of resident status and the oppression of the Palestinian residents of Jerusalem inflame hatred and tension in Jerusalem and pose a real threat to the stability of the entire region.

Jerusalem can be a city of peace and hope. The resolution of the conflict between the peoples can start in it, for the benefit and welfare of all of the residents of the city and the area. But we are worried and concerned over what is actually happening in Jerusalem. We call on you to join us to raise a different voice; to warn and influence the public, decision makers and political players on the national and municipal level, in order to stop the damage being done to Jerusalem right now, for the sake of the people of Jerusalem and to promote peace between Israel and its neighbors. 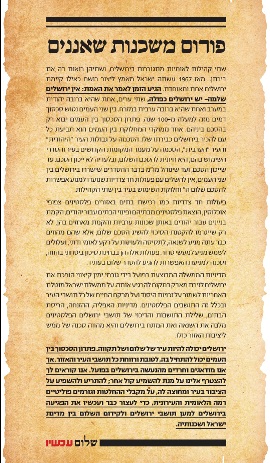