“Evacuate Bibi, Evacuate!”
In the past view days Likud MK’s have been running a campaign in the national newspapers urging the Israel Prime Minister, Bibi Netanyahu, to build in the West Bank.

Under the slogan “We have your back, Build  – Bibi  – Build” the MK’s published large advertisements with all profile pictures of the MK’s supporting construction in the territories.

Immediately Peace Now activists came up with a counter campaign playing on the Hebrew version that reads:

“The world has your back, Evacuate Bibi, Evacuate” – accompanies with the profile pictures of world leaders who have been urging for a settlement freeze. 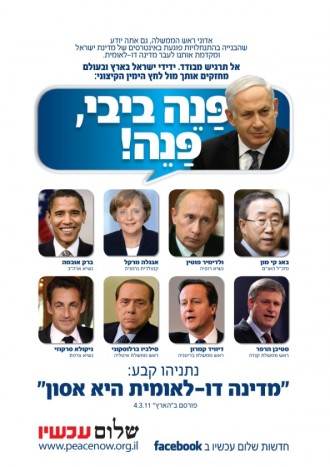