On August 27, 2009, Peace Now appealed to the Israeli Supreme Court to force the Defense Minister Ehud Barak and GOC Central Command Gadi Shamni, to halt construction of 15 permanent buildings and to request the issuing of demolition orders in the settlement of Kiryat Netafim.

In March 2009, the Peace Now Settlement Watch team discovered that work had begun in preparing the ground for permanent construction. 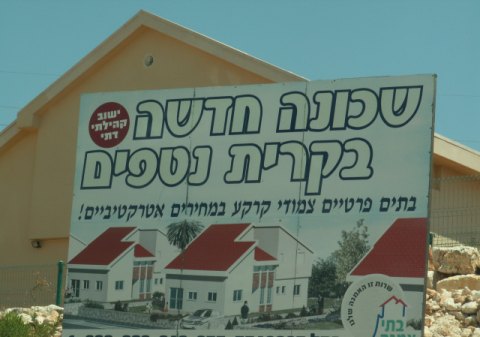 Today, five months later, the initial frames of the 15 permanent structures have been built, all this done illegally without permits, on lands defined public lands and private lands owned by Palestinians.

For the petition (in Hebrew).

On September 2, 2009 the state responded in court, which in contrast to its positions in similar cases the courts shouldn’t feel obligated to issue an interim order, even though the construction is illegal. Their reasoning was that the state has already issued stop-work orders which are currently being enforced by the relevant authorities.

On September 6, Judge Rubinstein decided against issuing an interim order, despite the clearly illegal construction.

On September 17, Peace Now presented proof to the court that despite the cease-work orders the settlers continue to construct on site, and requested that the court review the issuing of an interim order.

On September 29, the state responded to the body of the petition, and this time, did not object the issuing of an interim order.

On 1 October 2009 Judge Rubenstein issued an interim order ordering the settlers to stop all construction operations and sale of houses in the Peace Now’s petition.

On December 29, 2009, the State informed the court that it has decided to advance the process of planning in the settlement of Kiryat Netafim. This particular plan is intended to regulate the construction in Kiryat Netafim that began prior to any approved plans, thus eventually permitting retroactively the building in the settlement to take place, with the potential of expanding it.