March 3, 2011 | The Israel Internet Association has decided to remove the domain that used “peace now” from its right-wing owners.

A few months ago, we at Peace Now discovered that an internet domain address using the words “peacenow” was owned by a man named Ariel Rofeh from Alfey Menashe and that it was up for sale. After making contact with him, we realized that the site led straight to the website memorializing Rabbi Meir Kahane. 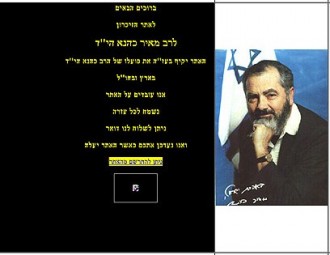 The site the missused domain leads to

We worked with Adv. Galit Bonne from D.Mirkin & Co. law offices and sent an appeal to the Israel Internet Association. Two days ago they issued a ruling that the domain name in question will be taken from the man who now owns it.  In the decision, it was stated that,”those who currently own the domain are working to purposely disrupt the activities of Peace Now. When someone enters this address, it is clear that they want to reach Peace Now and not the site that the address currently leads to… The spreading of opposing ideologies while connecting it to the web address of the plaintiff most certainly disrupts the plaintiff’s work. The owners of the domain were not able to present any reasons for holding the address other than disrupting the activities of Peace Now on the internet.

Yariv Oppenheimer, Peace Now’s Director-General reacted to the decision: “I am pleased that at least online there is law and order and we can remove settlers who have taken over an address that is not theirs. It is now up to the State to act on the ground and remove settlers that have settled on land that is not theirs and in many cases belongs to private individuals, at least one removal worked for Peace Now.”