Today Israel’s Bank Leumi cancelled a philanthropic project it was running, due to public outcry over the inclusion of an extreme right wing group called Im Tirzu. (“Im Tirzu” is a group that is leading the battle to limit freedom of speech/democratic norms and to close down left wing NGO’s in Israel.)

The project had allowed internet users to cast online votes for which philanthropic groups (out of list it had compiled) should receive charitable donations from Bank Leumi.

Public outcry arouse last week after Peace Now General Director Yariv Oppenheimer, criticized the project over the participation of Im Tirzu, publishing a letter on his Facebook page that he had sent to the Bank  announcing he was closing his Bank Leumi account and encouraging others to do the same.

It was soon reported that the fax machine at the main Leumi branch collapsed under the strain of complaints, its facebook page flooded with angry members of the public – over 3,000 threatening to leave the bank.

Due to the mass response a Facebook group called “Two Million Reasons to Leave Leumi” was also set up where the public was urged to complain to Leumi over the fact that its money could be used to fund political groups, particularly extremist bodies like Im Tirzu that clearly advocate for political oppression and silencing.

Over the next few days Peace Now lead the media campaign calling for Bank Leumi to disbar Im Tirzu and appealed to Im Tirzu itself to show some common decency and to drop out of a competition meant for social non profits, which provide services to the poorest sections of the public.

Rather than admit a mistake and remove their participation in the project, Im Tirzu insisted to stay on and bought about the cancellation of the entire project.

As eventually due to the outcry the Bank has decided to halt the competition and instead to distribute 10,000 Shekels + expenses to every organization that took part in the competition (as opposed to larger sums promised to the top three winners).

In response the right wing and the Im Tirzu group released a statement attacking Peace Now and specifically Yariv for causing the competition to be halted.

Instead they should have apologized to the public and the bank for trying to “muscle in” on money intended for social not political causes, and admit their actions caused a national fiasco. 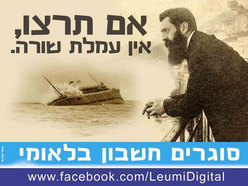