Yariv Oppenheimer, Secretary-General of Peace Now, will not bring us peace. But he is he only one who is succeeding in blocking the settlers and preventing the expansion of the outposts.

A young committed man brimming with public courage stands today almost alone against the settlers, mainly those who reside on private Palestinian lands in illegal settlement outposts. His name is Yariv Oppenheimer, and he drives the settlers mad because he has succeeded time and again in placing a few boundaries for this band of people, who are certain that the entire area beyond the Green Line is their private domain, and they can do with it as they please without interference. Most of the government institutions are afraid of them, grovel before them and do not dare to confront them on any matter, trivial or grave. Therefore, their astonishment is so great when their prime minister prefers to act in keeping with the instructions of the High Court of Justice rather than do the bidding of them and their rabbis.

Yariv Oppenheimer is secretary general of Peace Now, a fairly small public policy movement, which has known much finer days in the past, and is perhaps the last remnant of a strong, kicking, relevant left, which 30 years ago managed to send hundreds of thousands of people into the streets. No more.

Oppenheimer’s strength lies in his determination and unwillingness to give up, in many cases against all odds. Together with another several hundred, even several dozen, determined and committed activists such as him, the movement succeeds in standing up to tens of thousands of settlers, some of whom are very extreme; settlers who do not take anyone into consideration, and rightfully so. They are the lords of that land, and to a large degree the lords of this land as well.

With diligence and courage, Oppenheimer and his activists succeed in confronting the settlers, undeterred by threats, online comments bordering on madness, burning hatred and defamations implying that they are traitors, post-Zionists, enemies of Israel and other claptrap of that kind. They succeed in annoying the settlers, and all the right wing parties, to such a degree that senior Likud figures say that Netanyahu’s decision to build ten houses for every building that will be demolished in Givat Haulpana is intended to annoy Peace Now. Goliath is furious at David, even before the latter has drawn his slingshot.

Oppenheimer’s slingshot is the constant and uncompromising documentation of construction in the territories. Peace Now activists go into the field, roam everywhere, writing, photographing, checking documents, comparing the promises that Israel gives the leaders of the world to the existing reality. And everything they know, they publish, both in Israel and abroad—an act that brings the hatred against them to hysterical proportions.

Oppenheimer is not a politician. He does not have it in him. He does not know how to leverage his activity and publicity for personal promotion. When he ran in the Labor Party primary a few years ago, he was not elected to a viable slot. All the better. There are 120 MKs. There is only one Peace Now secretary general. In no foreseeable scenario is it easy to predict a glorious future for Peace Now. Peace is not a sexy matter. It has no ratings. Certainly not “now.” This being the case, the task that this movement has undertaken—to stop to some degree the settler rampage with regard to lands and building settlement outposts—is immeasurably important.

There is no one to do this in their place. The Labor Party headed by Shelly Yacimovich—certainly not. As of now, it has no interest in these foreign policy affairs. Kadima? It did its part by joining the government. The entire process of blocking the legalization bill would not have reached fruition if Kadima were not in the government. This leaves Meretz with its three MKs. Fine and good.

A few weeks ago, Peace Now organized the annual left wing conference. They do this every year. Hundreds of people came, spoke, debated, displayed unclear optimism about the future of the left wing. Yariv Oppenheimer scurried between the discussion rooms, devoid of pose or whims. Down to earth, making sure everything was working properly, pleased like a father who has come to the annual celebrations at his children’s kindergarten. One could not help but think that Israeli public life lacks a few more people like him. Certainly, this is true for the Israeli left. 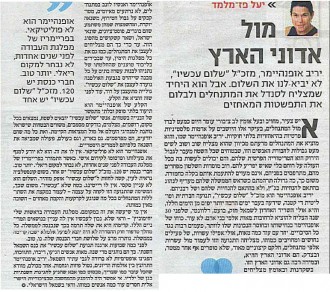