Since the incident on 9 January 2018 when Israeli settler Rabbi Raziel Shevach was shot to death by Palestinian terrorists, Israeli Defense Minister Avigdor Lieberman has pushed for the authorization of the illegal outpost to which Rabbi Shevach’s belonged, Havat Gilad. Rather than conducting a frank examination of how to rectify the security and political burden that settlements and outposts place on Israelis, Lieberman prefers to exploit this situation by pandering to the right-wing base and furthering their one-state agenda of destroying the viability of a future Palestinian state.

It would be a grave mistake to officially recognize Havat Gilad for the following reasons:

It would further undermine the possibility of reaching a two-state agreement – The outpost of Havat Gilad (a.k.a. Gilad’s Farm) is located deep inside the West Bank, some 20 km from the Green Line and wedged in between several Palestinian villages near Nablus. Israel would have to evacuate the outpost in any foreseeable two-state solution scenario, which, together with the other settlements and outposts it will have to evacuate, would require tremendous political will on Israel’s part.

Legalizing the outpost would constitute the establishment of a new settlement – the Havat Gilad outpost is remote and isolated from the nearest settlement, and its recognition would mean that Israel has established a new settlement altogether. It is also important to note that this recognition on the table is not just about legalizing the existing outpost structures; it also includes the approval of a building plan that will expand the outpost with the construction of dozens of additional housing units. The addition of dozens of families will make it even more difficult to reach a two-state agreement.

It would reward criminals – The Israeli government repeatedly conveys a problematic message regarding the rule of law when it concerns settlers. Like in many other cases, Havat Gilad was founded by dozens of families who decided to establish “facts on the ground” by building houses themselves, in violation of Israeli law (not to mention international humanitarian law), without a plan or permits, on land that they did not own. Whereas the rule of law is the guiding light of any democratic society, when it comes to settlers, the Israeli government disparages the law and sends a message that delinquency pays off, and that their continuation of illegal activity is legitimate and will go unpunished. To be clear, all of the structures in the outpost were issued demolition orders from the first moment they were built. It is impossible for the government simultaneously to stand up to the violators of the law and to work to legalize the outpost retroactively. No other population would have been afforded the same treatment, nor would anyone inside Israel itself have won such government sympathy in a similar case.

It would set a precedent of legalizing an outpost on private Palestinian land, once considered unthinkable – Havat Gilad was built virtually entirely on private and unregulated land, measuring some 350 dunams. The settlers claim that they purchased the land, but it appears that only one of dozens of plots on which the outpost is located was registered in their names. The claim that the rest of the land was recently purchased is beyond reason, for there are dozens of plots with hundreds of different owners, and there is virtually no chance that every one of these owners agreed to sell the land. The only way to legitimize the outpost is by legalizing a land grab, a move that would contravene the positions of all Israeli governments and legal advisors to date. That being said, such a move would align with other recent positions taken by current Attorney General Avichai Mandelblit, who has permitted land expropriation for settlement purposes in several locations (e.g. Haresha, Ofra). In the event that such a move for Havat Gilad is approved, the Government of Israel will be crossing another red line by legitimating land theft on a much larger scale than in previous cases.

It is a cynical exploitation of an abominable murder – This government has repeatedly exploited abominable murders by submitting to an extreme and messianic minority in its base, which seeks to entrench occupation and apartheid in the West Bank even though it is clear to all that a future Palestinian state is to be established on such land. 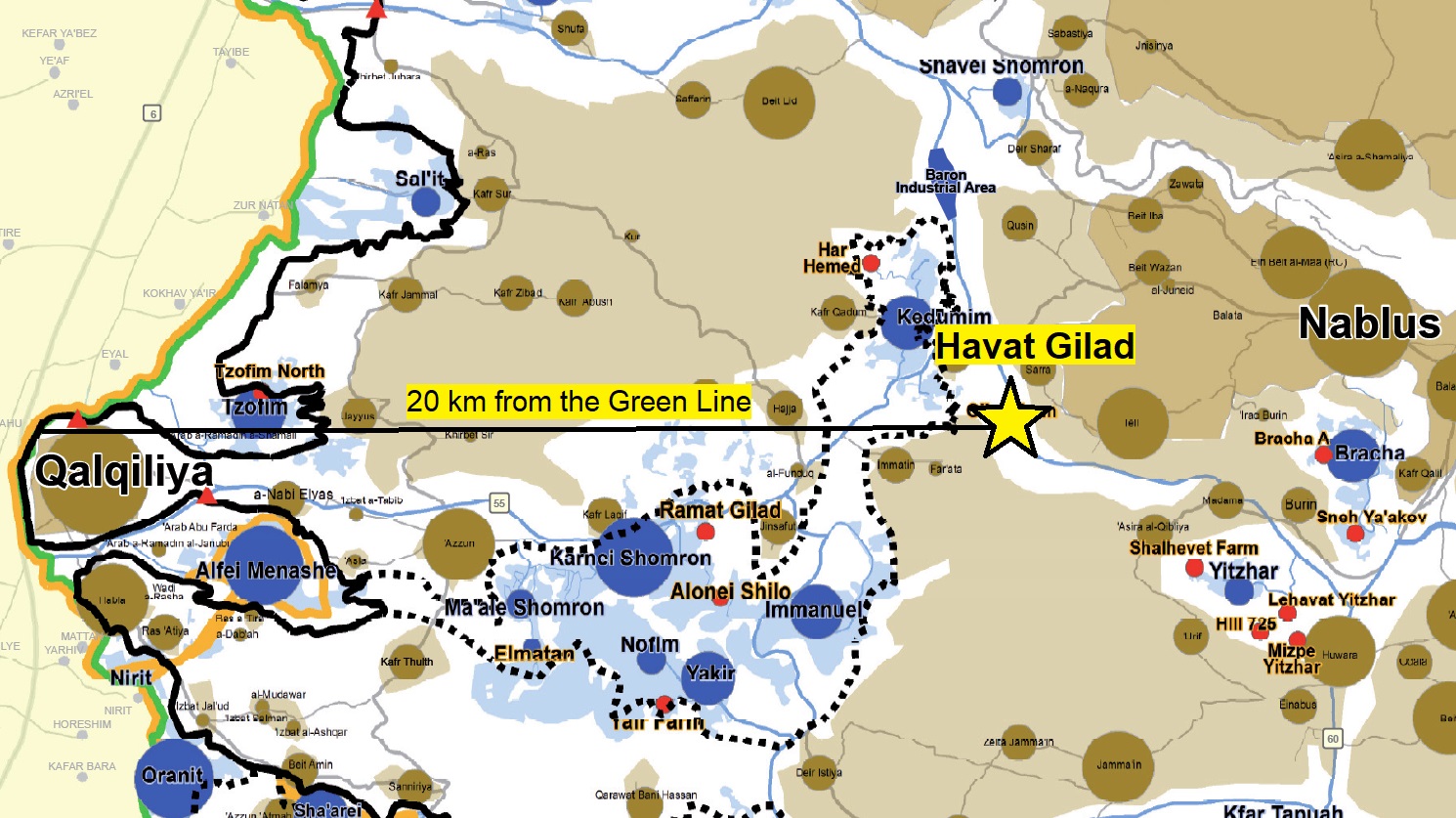 Notwithstanding all the pain over the terrible murder of an Israeli living in the Havat Gilad outpost, there is no reason to legitimize such blatant criminality on private Palestinian land. The legalization of the outpost would signal that the government does not intend to advance a final peace agreement, but rather only to extend Israel’s hold on the West Bank and to prevent the possibility of establishing a Palestinian state alongside an Israel with secure, internationally recognized borders. By working to authorize the outpost, the government is encouraging violations of the law, as well as sending a clear message to the settlers that such criminal acts pay off.