On the 26th of September 2010, the 10 months settlement moratorium came to an end. Since then, the settlers have managed to “catch up” with the construction freeze and erase its effect, starting construction of some 2,000 housing units in 75 different settlements and outposts, one third of them in settlements east of the Separation Barrier (this number is higher than the yearly average for the last few years). Meanwhile the Israeli Government has approved the planning and marketing of at least 800 new units in 13 settlements.

Following is a summary of the settlement activity in the West Bank (not including East Jerusalem) in the 8 months since the end of the moratorium.

As soon as the freeze order expired, the Israeli government adopted a policy allowing any previously approved construction, as well as approving some new construction projects. According to Peace Now’s count, there are 13,000 units that can be built without need for any further approval of the government. Since the end of the moratorium the settlers started construction on at least 1,976 housing units, of which:

• 21% are in settlements west of the built-up Separation Barrier (420 units);

• 33% are in settlements east of the Separation Barrier (659 units). As a point of comparison, in the past few years construction east of the barrier made up only 20% of the total construction;

• 46% are in settlements West of the planned route of the Barrier that hasn’t been built yet (897 units). 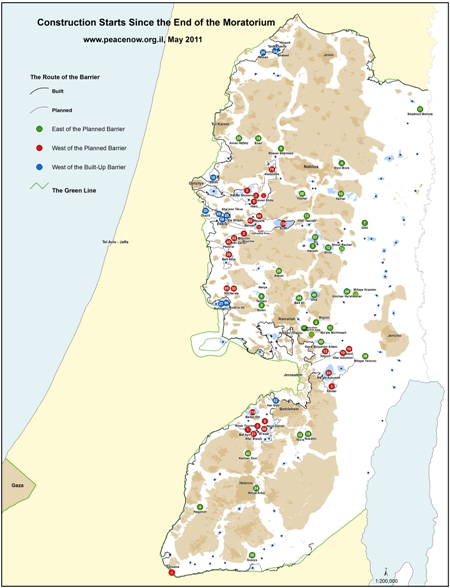 2. New Approvals by the Government

In the 8 months since the moratorium the government approved at least 800 new units in 13 settlements.

Following the Itamar killing, the government announced the approval of some 390 new units as follows:

•  Kfar Eldad (a settlement east of Bethlehem that when established was officially declared only a temporary site) – 50 units.

Other approvals that we know of:

•  Bietar Illit – on 28/4/11 the Minister of Defense approved the marketing and construction of 294 units in Beitar Illit.

•  Efrat – on 28/4/11 the Minister of defense approved the marketing and construction of an establishment for the elderly and a commercial center in Efrat.

•  Kiryat Netafim – plan no. 129/2 for the construction of 86 units in Kiryat Netafim (near Qalqilya) was deposited on April 2011 (approx. 75 of these units are already built and are being retroactively approved following Peace Now’s petition).

•  Halamish – plan no. 203/2/2 for the construction of a new neighborhood in Halamish (at least 24 units) was approved for depositing on April 13, 2011. The approval was given retroactively, following Peace Now’s petition against the illegal construction that started without approvals.

• According to the press, the government approved plans in the existing settlements of Rotem, Hemdat, Nofim and Sansana, retroactively approving the illegal construction there.

• The Ministry of Housing started planning procedures for 800 units south of the Givat Zeev settlement, that are meant to connect the settlement with Jerusalem.

The Minister of Defense’s approvals (of plans or to start marketing) are not public, and therefore there might be more approvals of which we haven’t heard.

Since the end of the moratorium there is a dramatic increase in the number of illegal buildings constructed in the settlements. In most cases the construction is proceeding according to plans that were never approved by the Minister of Defense. At least 507 illegal housing units are currently being built in 29 settlements (9 of which are “illegal Outposts,” where there are 35 illegal structures or trailers under construction).

4. The State’s Declarations in Court on Intentions to Approve Outposts

In the last few months, the government declared in the High Court of Justice its intention to endorse a new general policy, according to which illegal construction that was built on “State Land” (or on land that could be declared as “State Land”) will be retroactively approved, while construction on private Palestinian registered land will be demolished and evicted within one year. In one case, at Yesh Din’s petition against the outpost of Amona, which is built on private land, the state declared that the issue depends on political considerations and therefore refrained from promising its eviction.

It is important to mention that any approval of an outpost would require the plenary of the cabinet to convene and to decide on the establishment of a new settlement in the West Bank.

Here are the most recent state declarations regarding Peace Now’s petitions:

• Haresha and Hayovel – intention to retroactively approve the two outposts.

• “The 6 Outposts” (“The delimitation orders”) – intention to retroactively approve those outposts that can be approved and to remove the outposts that are on private lands. This probably means that there is a plan to approve the 5 outposts of: Mitzpe Lachish, Haroeh, Ramat Gilad, Ma’ale Rehavam and Mitzpe Yitzhar that are on “State Land” or only partially on private land, while the outpost of Givat Assaf, which is fully on private Palestinian land, will be demolished within on year.

• 15 illegal houses under construction in Kiryat Netafim – the government is promoting a plan for the approval of the houses in the center of the petition as well as other illegal buildings in Kiryat Netafim.

• 24 illegal homes under construction in Halamish – the government announced the promotion of a plan to retroactively approve the houses.

• 20 illegal houses under construction in the outpost of Shvut Rachel – the government announced the promotion of a plan to retroactively approve the houses together with the entire outpost.

• 40 illegal homes under construction in Shilo – the state argued that the petition was premature and did not address the issue of law enforcement.

• Migron – there is no change to the State’s promise to remove the outpost after building an alternative site for the settlers in the settlement of Adam. However, because of the long time that has passed since the state has made its promises while nothing changed on the ground, Peace Now asked the court to give a final decision in the case, especially following the fact that the settlers continue to build new houses in the outpost on private Palestinian land, and that two of land owners, who were among the petitioners, have passed away and didn’t get a chance to see their land returned to them. The court has yet to give a decision on the issue.