A draft agreement with the settlers reveals Netanyahu’s none-housing projects for the settlements. Among others, new roads and infrastructures, renovation of the Cave of the Patriarchs, promoting survey procedures that will allow retroactive legalization of outposts, and advancing water projects in violation of the Oslo accords.

* This is not connected to the publication in IDF radio from 10/11/14 on detailing the plans for 44 roads in the West Bank (24 of them are already approved).

On October 26, 2014, the Israeli Channel 2 reviled that the Prime Minister signed an agreement with the settlers’ leadership (Ministers Bennet and Ariel and Zeev Hever – Zambish, a settlers’ leader) on a list of development activities in settlements, in return for their not making political troubles to the coalition. The report revealed a document signed by Avihai Mendelblit, the secretary of the Government, detailing the projects (English translation and the original here). In addition, the report stated that another agreement, on the advancing of 2,000 units in settlements, was close to be signed.

According to reports the projects in the list were approved by the Prime Minister for funding and implementation. However, according to reports, in a meeting with cabinet members to approve the funding for the projects, Minister Lapid refused to budget the funds. It is unclear if all of the projects are now put on hold, or whether some will be executed with the regular budget of the ministries without special allocation of funds. However, the projects that were on the agenda give us a glance on the intentions and plans of the government for the near future in the settlements.

2.       Conducting of surveys of Palestinian lands in order to declare them as State Land for the retroactive legalization of outposts.

3.       Renovation of the Cave of the Patriarchs, one of the holiest sites in Islam.

5.       Water infrastructure – without the approval of the JWC, in violation of the Oslo agreement.

6.       Public parks, access roads to settlements, and infrastructure of electricity.

1. The Cave of the Patriarchs in Hebron is considered the fourth in holiness for Islam (after Mecca, Medina and al-Aqsa Mosque). The document reviles that the intentions are for constructing “pavement, elevator for the disabled, roofing”. In shed of the current tension around the Temple Mount – al-Haram a-Sharif, any change in the Cave of the Patriarchs – al-Haram al-Ibrahimy may have dangerous consequences.

2. Roads – The building of infrastructure and roads should not be underestimated as they result in both creating a separatist entity for the settlers in the Occupied Territories as well as a boost for the development of the settlements. One of the major driving forces behind the growth in settler population in the past 20 years was the establishment of bypass roads: roads that bypass Palestinians cities for the better travel of the settlers.

Bypass roads (see map) – approx. 25 km of roads bypassing Palestinian villages, taking approx. 4,500 dunams (1,115 acres) most of which will be confiscated from Palestinians. The plans for the roads are already approved and can be implemented as soon as the Government decides to.

Interchanges (see map) – construction of an interchange at the “sheep junction” south of Hebron and another one east of Halhul.

Security and access roads to settlements – in Eli, Ariel, Alei Zahav, Bruchin, Karnei Shomron, Imanuel and others, as well as upgrading of several roads.

This is not segregation, but… – The bypass roads and interchanges will be open to Palestinian cars and there will be no roads for settlers use only. However, they will create some separation between settlers and Palestinians movement because of the different towns they usually drive to. 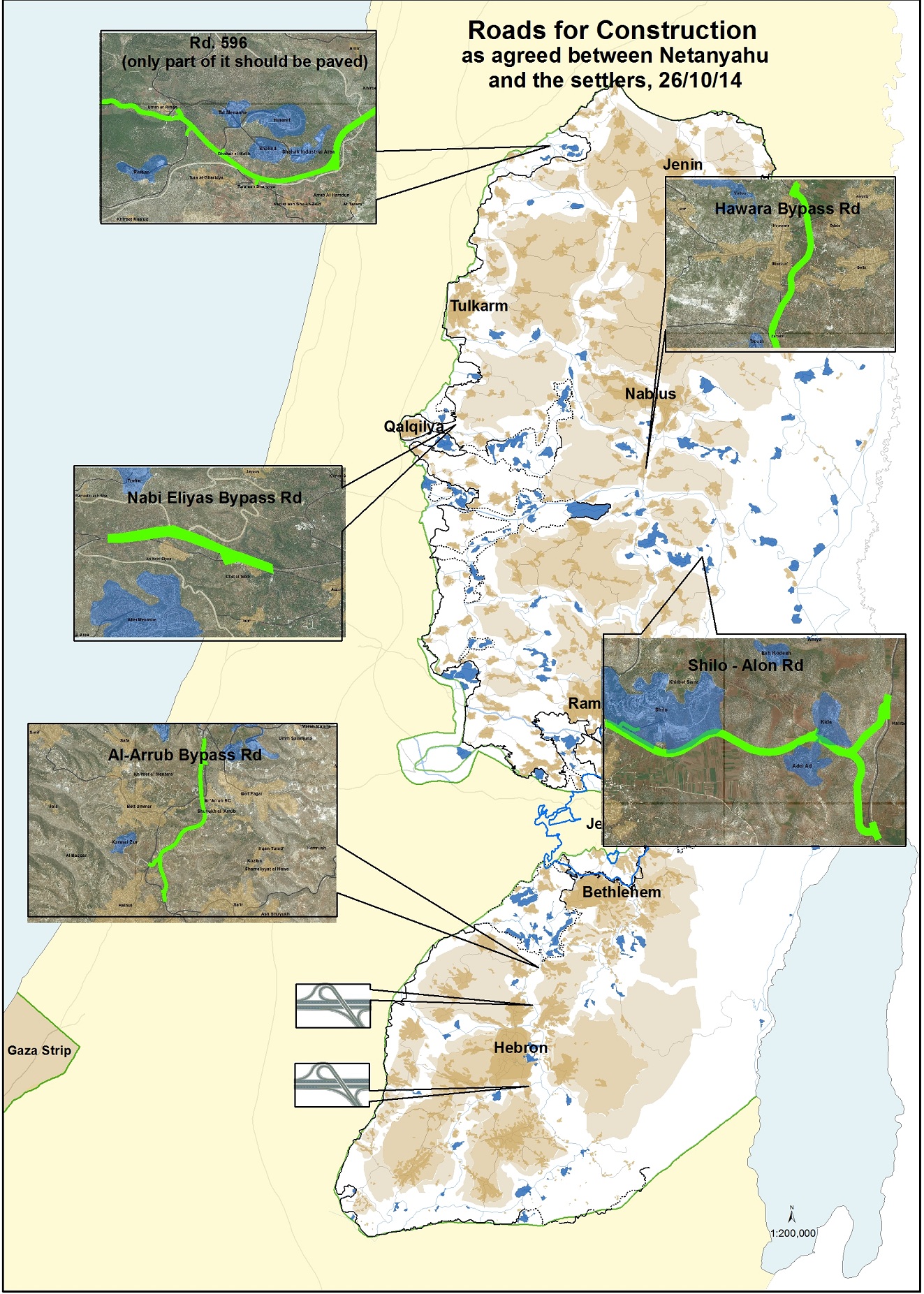 3. Water Projects – The document writes, “Approval of projects that are not being advanced as a result of JWC work freeze”. The JWC is the “Joint Water Committee” of Israel and the Palestinian Authority that was established as part of the Oslo interim agreement from 1995. According to the agreement, each side cannot build any water infrastructure in the West Bank without the agreement of the JWC. In recent years the JWC does not work and projects, for both sides (such as the water for Rawabi) are blocked. The meaning of the Government intention is that Israel will violate the Oslo agreement in order to pursue water projects for settlers.

4. “Students Villages”, trailer homes for new immigrants – These projects are meant to allow funding to directly encourage people, students and new immigrants, to move to settlements. Student villages are projects in which students receive accommodation and subsidies in return for living in the settlement and volunteering there. Usually it is an expansion of existing settlements.

5. Conducting of surveys of Palestinian lands in order to prepare land confiscation for settlements. According to the Israeli interpretation of the Ottoman land law, these are not confiscations but only declarations on state land, which do not change the legal status of the land. According to this interpretation, if the land is not cultivated for several years, than it becomes the property of the public, i.e. state land.

The surveys are meant mainly to enable the retroactive legalization of existing outposts that were built on private Palestinian lands. If the survey is successful, and the land is found to be not cultivated for several years, then the land will be declared as state land and the government could approve a plan for the outpost and make it legal.

At least some of the plans for the above projects are already approved by the planning authorities and only need the Government’s decision and funding for implementation.