This declaration is problematic, for a number of reasons:

2.  The Israeli obligation under the Roadmap (2003) is to remove all outposts established after March 2001. According to Peace Now’s count, this requires the removal of 45 settlement outposts, not 3. According to the Ministry of Defense, it requires the removal of 26 outposts (again, not 3). So this new commitment represents a clear violation of Israel’s Roadmap obligation regarding outposts. It also appears to be an effort to re-define Israel’s obligation regarding outposts from removing all outposts to removing only those on private land. This, in order to pave the way for legalization of the remaining 90+ outposts (which technically cannot be legalized) into fully official Israeli settlements – something that would nearly double the number of “legal” settlements in the West Bank.

3.  The Israeli commitment under the Roadmap to remove outposts established only after March 2001 was based on the demand by then-Prime Minister Ariel Sharon that he should not be held accountable for outposts that were  established under someone else’s authority. However, the person whose authority those remaining outposts were established under is Ehud Barak, who has been back in government since 2007.

4.  It appears that Netanyahu is playing games with the distinction between registered and unregistered private land. This bears some examiniation:

– In 1968, shortly after Israel captured the West Bank in the 1967 War, the Israeli authorities closed the process by which Palestinians could register land, making it impossible for land owners to register their ownership, regardless of any documents or other proof of ownership they might have (for example, documents proving the owner has paid taxes on the land). Since that time, only land that was formally registered before 1968 is recognized by Israel as registered private land. All other West Bank land is viewed as “unregistered” and subject to “survey” to determine if it can be seized by the State of Israel as State Land, on the basis of old Ottoman law under which the State can declare unregistered land as State Land if the land lies fallow for a certain number of years. Around 16% of the West Bank has already been declared as State Land.  Most of this land has been used for settlements. 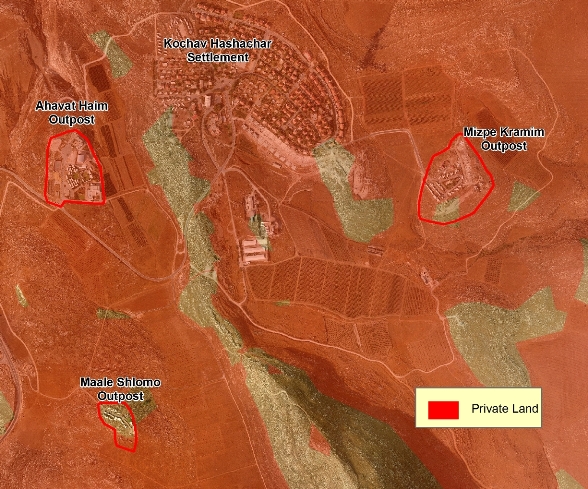 – The State has already indicated an intention to do precisely this. For example, there is the outpost of Harasha, which according to the data that the State gave Peace Now officially is on unregistered private Palestinian land. When Peace Now appealed to the court against the construction of some of the houses in Harasha, the State responded that it intended to try to declare the land as State Land and then approve the houses.