Construction of a huge structure referred to as the “Amana House”, has recently started in Sheikh Jarrah in East Jerusalem. The structure is intended to serve as an office building for the Amana Association – a private entity operating toward establishing and expanding settlements and responsible for many of the illegal outposts in the Territories. The structure is being built within the Palestinian neighborhood of Sheikh Jarrah, and is adjacent to St. Joseph Hospital, which serves the Palestinian population of Jerusalem and the West Bank. 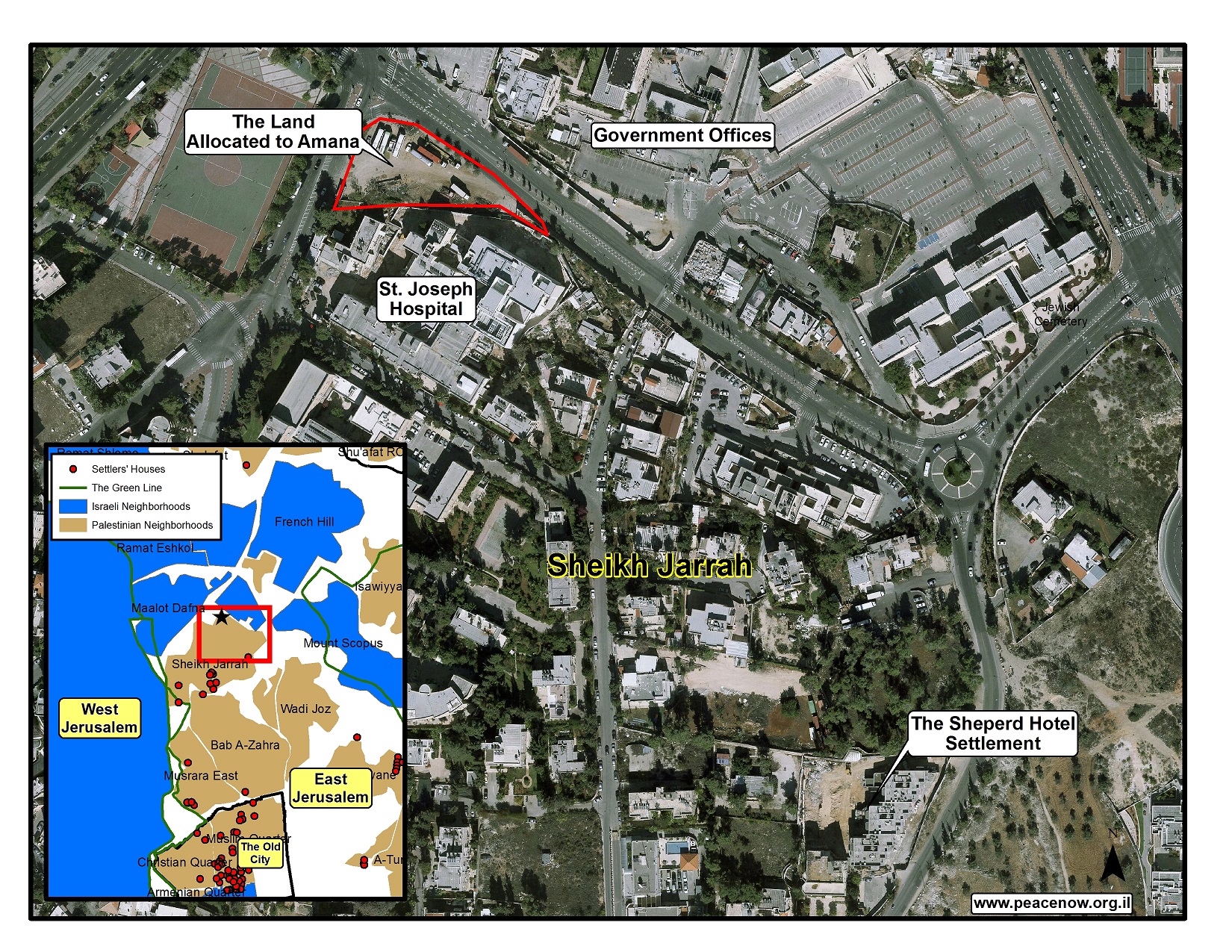 Construction of the settlement is supported by a comprehensively mobilized array of governmental systems, headed by the Israel Land Authority (ILA), which in an illegal and misleading procedure, expropriated private Palestinian land and, without conducting a tender procedure, handed it over to Amana, an association that is politically and ideologically affiliated with the right-wing government.

The story of the Amana House started in 1992 when the ILA decided to allocate the 3 dunams in Sheikh Jarrah to Amana for planning, based on Amana’s commitment to move their offices to Jerusalem (although in fact the offices of Amana were already in Jerusalem). The land was included in 1968 in a map of some 4,000 dunams that the Government planned to confiscate. The specific 3 dunams were never legally expropriated. In 1998, the construction plan made by Amana was approved, while the ILA is signed as the owner of the land. In 2009 the then Minister of Finance, Yuval Steinitz, signed an announcement of confiscation for public interest of a new artificial parcel, that was prepared by the ILA in order to launder the confiscation of the land for Amana. The appeal of the Palestinian owners of the land demanding to cancel the construction permit granted to Amana, is now pending in the Israeli Supreme Court.

It is important to note that two of the leaders of Amana were recently questioned for allegedly taking kickbacks from a settlement development firm. Also, the Amana movement owns the “Al Watan” company, subject of a police investigation on extensively fraudulent practices in land transactions in the Territories.

Peace Now: “It is not surprising that an organization like Amana, that mastered in illegal construction on stolen land, is building its new settlement in East Jerusalem on private land. The trouble is that Amana turned into an organization that has a state in its possession. The Government did the “dirty work” for Amana in order to take private Palestinian land and transfer it to the settlers, in order to establish yet another settlement that will make it harder to get to a compromise in Jerusalem”.

Chapter 1: The New Settlement in Sheikh Jarrah – Location and Significance

The Amana House, whose construction was recently started, is supposed to serve as the headquarters of the Amana Association, with 70 offices on four floors covering an area of approximately 3 dunams (0.75 acres) in the heart of the Palestinian Sheikh Jarrah neighborhood. The new settlement, does not only harm the delicate relations between Israelis and Palestinians in Jerusalem, but it is also intended to harm the possibility of a two-state solution as it is being built within a Palestinian neighborhood which will be part of the Palestinian capital in any future agreement.

The story of transferring the land to Amana reveals the manner in which governmental institutions mobilize in favor of political allies while trampling upon the rights of the Palestinian landowners and violating provisions of the law and of proper management.  While the affair began over 20 years ago, the government still continues to do all that it can to defend the ILA’s illegal activities and ensure the transfer of the land to settlers, as exposed in a hearing on the petition recently filed by the owners of the land, the Abu Ta’a family. The government does nothing in order to correct the distortions and illegal acts revealed and returning the land to its owners. 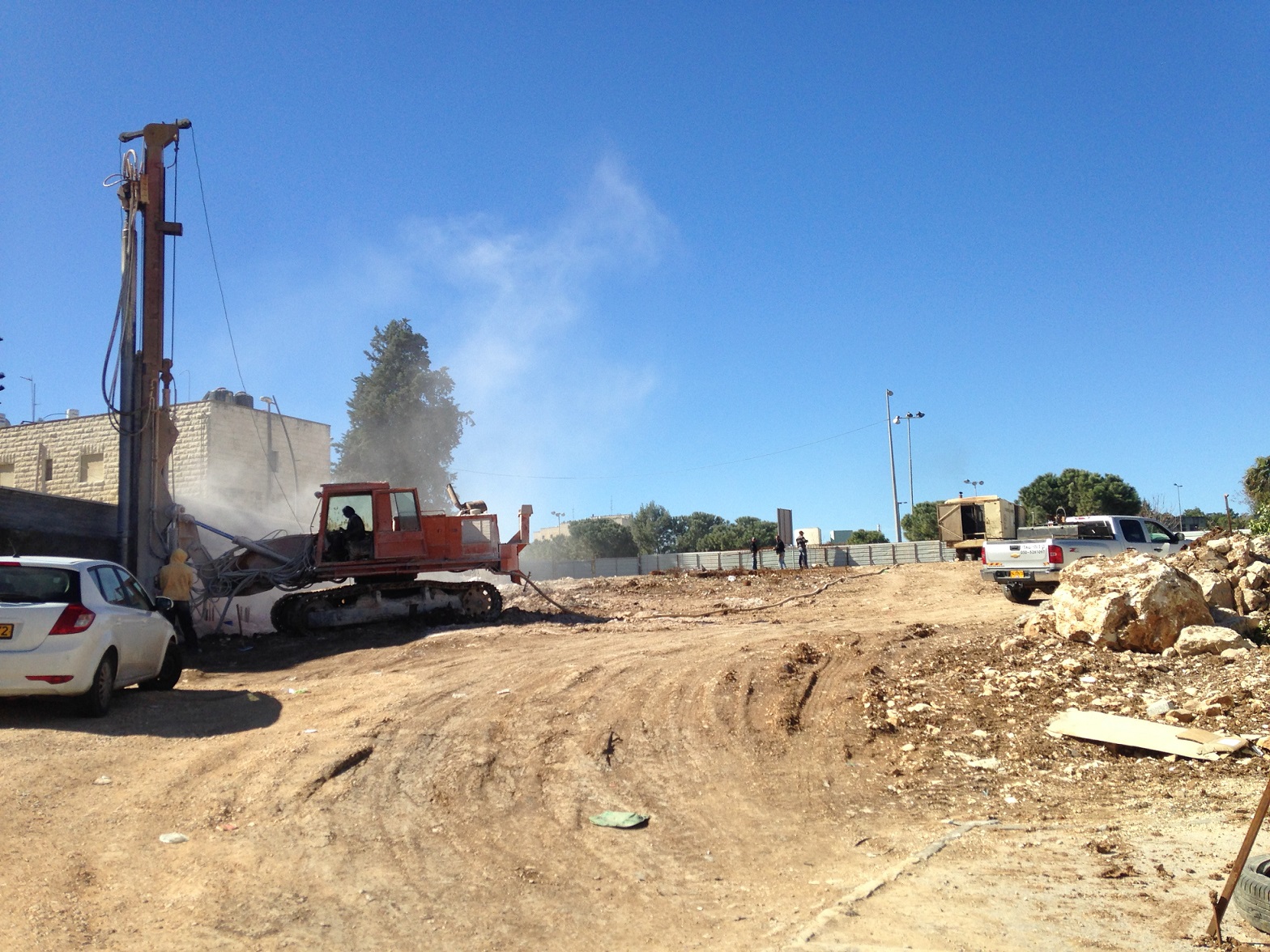 Starting the construction of the Amana House, February 2016

Following the Six-Day War, on 11 January 1968, the Minister of Finance issued two notices pursuant to Articles 5 and 7 of the Land Ordinance, announcing the intention to expropriate nearly 990 acres in East Jerusalem.  In practice, the government took possession of only certain areas of the 990 acres (toward establishing Ramat Eshkol and the French Hill, the “Eastern Wing” of the government office campus, paving Rte. 1 and more).

According to the law, government use of any part of the land requires an additional Minister of Finance signature to the notice, pursuant to Article 19 of the Land Ordinance, announcing actual expropriation (although for establishing the neighborhoods in East Jerusalem, the government implemented a temporary order under the Public Neighborhood Registration Law, exempting the need for such signature pursuant to Article 19).

In other words, according to law and a statement by the ILA itself, the land on which Amana House is being built was private land that is not actually expropriated.

It is important to note that, until recently, the owners of the land continued to use the land, renting it to an automobile business and using it as a large vehicle parking lot. The owners received no notice of the intention to expropriate their land nor of all of the proceedings conducted in its regard. The 1968 notice was general and provided no specification of parcels and plots, but merely stated “land in Jerusalem”.

On 30 August 1992 (probably in a post-election manipulation), ILA management decided to grant Amana planning permission to the land.  The excuse for granting it a tender exemption was that “the movement will relocate its offices from Tel Aviv to Jerusalem”.

Not only did the ILA not own the land at the time but the excuse for granting the exemption was false. The Amana offices, as recorded in the allocation transaction form itself, were located on 32B Ramat HaGolan St., Jerusalem:

According to the authorization agreement, Amana was required to prepare and approve a construction plan by 1 July 1993, but this did not happen (perhaps because it was the Rabin Administration that, following the “Klugman Report” attempted to put the ILA and its activities in East Jerusalem into order).

A new authorization agreement was signed in 1997, under Netanyahu’s government, providing retroactive application to 13 September 1993 in order to maintain the validity of the tender exemption.  These measures were all taken behind the land owners’ backs, without them being able to know what was happening.

In 1997 Amana submitted a construction plan (No. 4979) to establish a “public institution”.  When the district committee convened to discuss the approval of the plan, the Head of the Planning Administration stated that he had reservations as to the heading of a “public institution” used for a private organization.  Nevertheless, the plan was approved since the committee believed that it related to state-owned land.  Apparently, when Amana first submitted the plan, it stated the ILA was the owner  of the land, but did not have the ILA’s signature. The plan received preliminary approval and after it was approved for depositing, the Planning Administration noticed the missing signature and asked Amana (twice) to submit a copy signed by ILA. It was only several months later that Amana filed a copy allegedly signed by then Deputy District Planner, Amalia Abramovich, on 9 September 1998.

It is important to note that, in another instance, AP 6212-11-12, Abramovich claimed that her signature to a certain permit was forged.  She discovered this based on the correspondence relating to her signature.  However, in the case of Amana, as part of the petition filed by the owner of the land, the ILA refused to disclose the correspondence and even avoided submitting an affidavit from Mrs. Abramovich, still employed by the ILA, explaining the circumstances leading to her signature as owner of the land.

In addition to the signature and instead of attaching a land registration extract, Amana provided the Planning Administration with a letter from Avraham Nawi, ILA Jerusalem District Land Registration Coordinator, according to which “the area … is included in the designated location that was expropriated in favor of the government”.  Nawi’s ambiguous wording was intended to create a misleading pretense by which the land is owned by the government.

In 2008, when Peace Now first learned of the intention to build the Amana House, we contacted the ILA and asked why Amana received the land without a tender. The ILA’s response, dated 11 January 2009, stated: “We hereby inform you that the said land is not managed by the Israel Land Administration”.

After calling to determine how the development contract between the Administration and Amana was signed, we were informed that the previous response was wrong.  We have yet to receive an answer regarding the tender exemption.

Chapter 5: Attempt to register the land to the government

A development agreement was signed between ILA and Amana on 12 September 2005 by which Amana must pay the ILA 913,640 NIS in utilization fees.  Afterwards and in order to obtain construction outlines, Amana was required to prepare a PRP – Plan for Registration Purposes – in order to register the newly designated plots to the government.  However, since it is not really government land, the Land Registrar refused to register the land to the government as per the PRP and Amana could not obtain a permit.

Once again, ILA’s Jerusalem District Land Registration Coordinator, Avraham Nawi, came to the rescue and sent a letter of undertaking on 26 November 2006, by which the ILA will initiate publication of a Minister of Finance notice pursuant to Article 19 of the Land Ordinance, comprising actual expropriation of the lot and enabling registration thereof.

The permit process continued upon this commitment to register the PRP.

As stated, the problem with promoting construction was discovered when it became clear that the land cannot be registered to the government since it was not actually expropriated (pursuant to Article 19 of the Land Ordinance).  Yet, the government’s expropriation of a lot belonging to a private individual with the aim of allocating it to a private entity (Amana) does not comply with the basic rules of proper management.  Therefore, the ILA came up with a creative idea: the ILA invented a new artificial parcel, including the Eastern Governmental Campus, crossing a 4-lane road and including the 0.75 acres illegally allocated to Amana, located across the road.  The parcel lacks any logic as it does not follow any natural or historical boundary of parcels in the region, and it was delineated only in order to contain the plot intended for Amana.

Minister of Finance, Yuval Steinitz, signed the expropriation of the entire parcel on 20 December 2009 and the land was registered to the government.

The Minister of Finance is authorized to determine that the expropriation is retroactive, applying even before signing the notice pursuant to Article 19.  In this instance, the expropriation notice states that it “applies as of publishing the notice in the records”.  In other words, although the land expropriated upon the Minister of Finance’s signature, it was not state-owned when it was allocated to Amana and the construction plan was approved.

Chapter 7: Petition to cancel the plan and the construction permit

Works toward constructing the Amana House began in November 2015.  Pursuant thereto, the owners of the land, the Abu Ta’a family, filed an administrative petition to the District Court in Jerusalem, demanding that the plan and the construction permit approved for Amana be revoked. In court, the government’s lawyers defended the illegal expropriation and allocation of the land to Amana.  The government avoided disclosure of the documents relating to the allocation and expropriation procedures, which could shed some light on the decision-making process and true intentions underlying ILA’s activities.

The court rejected the petition on 7 March 2016, stating that even where the construction permit procedure was flawed, it is subject to relative nullity, seeing that the expropriation was eventually executed by the Minister of Finance, albeit too late. The court did not consider the fact that the expropriation was not retroactive and disregarded some of the landowner’s arguments. The landowner appealed to the Supreme Court where the file is pending a hearing.