At the End of the Settlement Moratorium: Approx. 13,000 housing units can be built without further government approval – of which 2,000 for immediate construction.

Future construction without further government permission – furthermore, there are at least another 11,000 housing units approved for construction according to valid building plans, and the settlers can build them even without further government approval. This means that if the government decides on a de facto “tacit freeze,” and commits not to approve new construction but without renewing the freeze order — the settlers can still build 13,000 housing units, 5,000 of which are in isolated settlements east of the separation barrier.

In order to realize the building potential of the approved plans, there has to be enough demand for the apartments in the settlements and a lot of money to invest in the construction, so that many of those thousands of housing units are theoretical and are not likely to be built soon. However, what is clear is that stopping the freeze will open the door to massive construction in the settlements.

The stages of approving construction in the settlements
A. The planning stage – The initiator of the construction (the government, the local council or private parties) makes a building plan and brings it for the approval of the Higher Planning Committee at the Civil Administration. The committee examines the plan, publishes it for public objections, discusses the objections and finally approves and publishes the plan to make it valid. In each of these planning stages the approval of the Defense Minister is needed to move the plan forward. At the end of the planning process the plan is valid and can move on to the execution stage.
=> According to Peace Now’s count there are approx. 38,000 unbuilt housing units in plans that have passed the planning stage and are valid.

B. The execution stage – in order to realize the valid plan there are two main stages:
1. Acquiring rights to the land – anyone who wishes to build in the settlements must receive or acquire the right to the land. In the settlements the land in question is usually public (“state land”), which the Civil Administration is responsible for allocating to different users. The Civil Administration must receive the approval of the Defense Minister for every allocation. In rare cases the land is purchased directly from Palestinians by private parties. The latter do not need permission from the Defense Minister to use the land.

What happens if there’s no Freeze Order? Potential construction of 13,000 units
Some are suggesting that in order to bypass the need to extend the settlement moratorium, there can be a “compromise” under which the Netanyahu government would allow the current moratorium to expire, but then impose a de-facto freeze under which the government simply does not issue new permits for construction.
The reality is that under such a compromise, construction in settlements can still re-start on a massive scale.  Apart from the 2,066 units that are ready to be built immediately at the end of the moratorium, there are 60 settlements that have received land allocations from the Civil Administration in the past through the World Zionist Organization’s Settlement Division or another settling agency. There are some 11,000 housing units that can be built in those settlements according to valid plans and they do not require renewed allocation or the permission of the Defense Minister.
If the government of Israel does not extend the moratorium, the settlers can build 13,000 housing units in the settlements, 5,000 of them are east of the separation barrier. The implementation of those units depends on the demand. Not in all of the settlements are there enough Israelis willing to buy houses. However, even if the 13,000 units are theoretical, still it is clear that ending the moratorium would open the door for settlement expansion across the West Bank and on a massive scale. 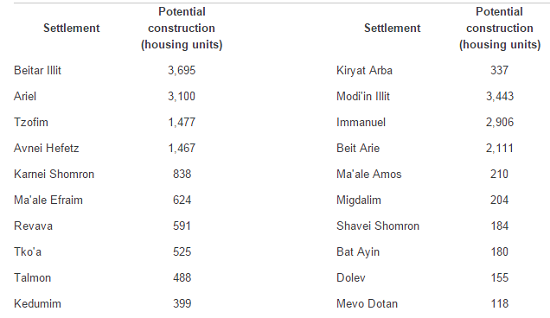 C. Methodology of the counting of the units
In order to determine the number of housing units allowed in the settlements we checked the approved plans in every settlement and compared it with the construction already exist on the ground. This report is based on data which was published at the “Spiegel Report”, an official report by the Ministry of Defense, which detailed the approved plans in every settlements and the number of housing units allowed in each of the plans, and on information and plans that were collected by Peace Now.
In the contour of each plan, a precise count of the existing housing units was conducted according to an aerial photo from July 2010. There might be some inaccuracies due to the fact that the count is based on aerial photos. The numbers were verified also with some data available by the Israeli CBS, on number of households in the settlements, and number of housing units in some of the settlements.
The count showed that in many settlements there was illegal construction, outside of the boundaries of the plans, or construction of more units than the allowed number.
The count did not include the details of each of the plans, but only to the outline (the contour line) of them. In some cases, where the construction on the ground exceeded the approved number, the count of Peace Now included the illegal construction as part of the implementation of the approved plan. In those cases there might have been higher potential of approved units than the number presented by Peace Now. This can also explain why in some settlements the number of potential construction according to the valid plans is lower than the number of units ready to be immediately built.