According to a story published today by the Israeli news website of Walla News, the Ministry of Defense signed an agreement with the settlement municipality of Beit Arye to further expand the settlement and to build its bypass road. The agreement includes:

1.      The approval to market and build another 100 housing units in the Kramim neighborhood in Beit Arye.

2.      7 Million Shekels for the immediate construction of the bypass road between Beit Arye and the settlement of Ofarim. The works started in July 2011 and should be completed in 4 months.

3.      The Ministry of Defense will promote a new construction plan to further expand the settlement according to the changes that were made in the planned route of the Separation Barrier around the settlement.

4.      The Ministry of Defense will compensate the municipality and 8 families of the settlement with a total sum of 6 million NIS, for the need to remove their homes to make way for the construction of the Barrier and a bypass road for the settlement.

It is still not clear whether this agreement also means that the construction of the barrier is now planned to be completed.

The planned route of the Separation Barrier was approved by the Government of Israel in the early 2000’s, originally planed to surround the settlements of Beit Arye and Ofarim in order to include them into an Israeli “finger” of land that is de-facto annexed to the Israeli side of the Barrier. The works on the barrier, which started in 2006, included a 4 kilometer bypass road that was supposed to connect the two settlements to Israel, and another 2.5 Kilometer bypass road to connect the two settlements. However, in 2007 the works had been stopped. 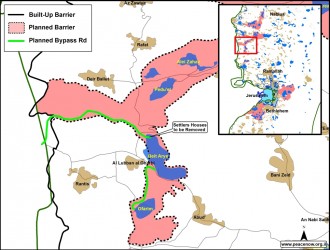 Following a petition by Palestinian owners of lands from the village of Lubban Al-Gharbiya, the Israeli Supreme Court ordered the Ministry of Defense to change the route of the barrier to exclude the private Palestinian land that was to be used by the fence route. Due to the decision, the route of Barrier and the bypass road was altered. However, the new route could not be built, as 8 settler homes were under construction in the same path. The settlers could not complete their homes because the Ministry of Defense ordered that the road will be on the same spot. So in 2009 the Settlers appealed to the Supreme Court against the Ministry of Defense, demanding compensations for the loss of their houses, and due to this petition the above agreement was signed.

As mentioned, the Barrier in this area was never completed. It is still unclear whether this agreement will mean that the government will now renew the works in order to complete the fence. If so, it will mean a dramatic expansion of the Israeli fence into the West Bank, which would permanently separate Palestinian localities from one another.

Peace Now: The Netanyahu Government continues to serve the settlers’ interest at the expense of the wider Israeli interest. The Defense Ministry could have chosen to compensate the 8 families without expanding the settlement and without investing millions of Shekels into bypass roads that serves only small amount of settlers. 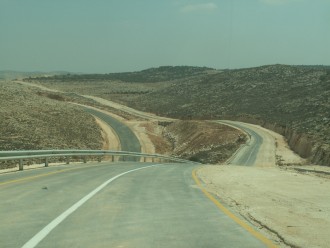