Torpedoing the Two State Solution – The Strategy of the Netanyahu Government

20% rise in construction starts in the settlements – at least 1,850 building starts for housing units, 35% of them (650 units) in isolated settlements east of the planned route of the Separation Barrier.

At least 3,500 units were under construction during 2011 (started to be built or continued construction from previous years). 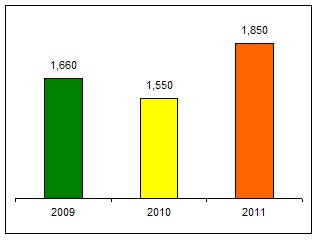 In 142 settlements and outposts there was construction starts – including:

* The construction data is based on Peace Now’s count (aerial surveys and field visits) from Jan-Sep 2011.

1,577 units in settlements were published as tenders (and another 2,057 units in East Jerusalem) – as part of the Ministry of Housing’s official list of upcoming tenders. Among others: 317 units in Efrat, 277 in Ariel, 642 units in Beitar Illit and 42 in Karnei Shomron, more details here.

Tenders in Settlements (not including East Jerusalem) 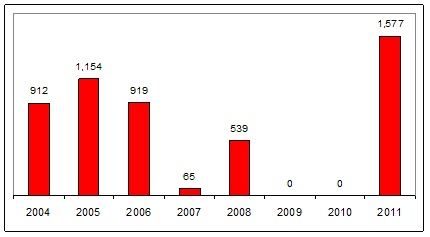 Recognizing 11 new settlements by legalizing outposts – During 2011 the State informed the court of its intention to officially establish 11 new settlements by legalizing illegal outposts which are home to some 2,300 settlers in 680 structures. At the same time the State informed the court of additional delays of the evacuation of three outposts on private Palestinian land. See below the list of outposts in court hearings.
In addition, the State announced the promotion of plans to legalize hundreds of units of illegal construction in the settlements (119 housing units in Shilo, 86 housing units in Kiryat Netafim, 27 units in Halamish and additional hundreds in Nofim, Hemdat, Rotem and Sansana.)

The highest number in a decade of plans in East Jerusalem and the establishment of new neighborhoods – plans for 3,690 housing units were approved for validation and plans for another 2,660 housing units were deposited for objections. Among the plans that got the final validation are the new neighborhoods of Har Homa C with 983 units and Givat Hamatos (stage 1) with over 2,000 units.
In addition, at least 823 construction permits were issued by the Jerusalem Municipality. After a permit is issued the contractor can start to build, and the number of permits can be a good indication for the number of actual construction starts.

Construction of 55 new settlement units in three new complexes at the heart of Palestinian neighborhoods in East Jerusalem – In 2011 the settlements at the heart of the Palestinian neighborhoods in East Jerusalem reached a new level with the beginning of the construction of new housing complexes for 55 families. 18 units in A-Suwane, 20 units in Sheikh Jarrah (the Sheperd Hotel) and 17 units in Ras El-Amud (the old police station).
Furthermore, in 2011 the construction of stage 2 of the Maale Zeitim project in Ras al-Amud was completed with 60 housing units, some of which have already been populated.

Promotion of Plans in East Jerusalem

Torpedoing the Two State Solution – The Strategy of the Netanyahu Government

The Netanyahu government is promoting several plans precisely in disputed areas which could prevent the possibility of establishing a Palestinian state alongside Israel. The formal negotiations between Israel and the Palestinians, as well as informal negotiations such as the Geneva initiative, have revealed the critical disputed areas that are threatening the viability of the Palestinian state, and in which the construction of settlements could prevent the chance for an agreement: 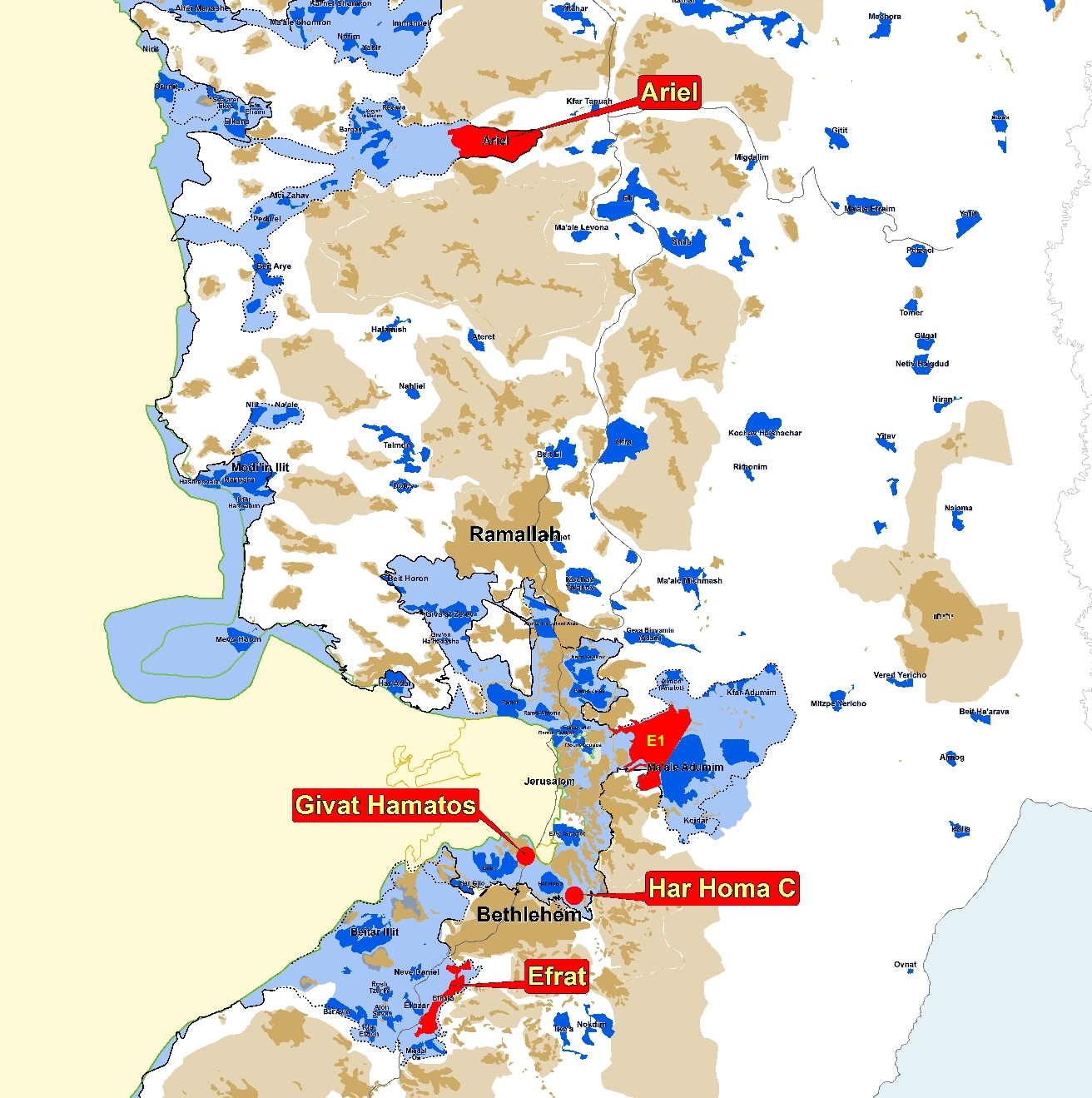 a. The E1 area – the area between Jerusalem and Maale Adumim is critical for creating territorial contiguity of a Palestinian state from south to north and for the connection of East Jerusalem with the rest of the Palestinian state. It was recently reported that the Netanyahu government is promoting the realization of the plan to build thousands of housing units in E1 by evicting the Bedouins from the area and completing a system of roads.

b. The settlement of Efrat is adjacent to Bethlehem in the south, and is located east of the main highway (60) connecting the southern West Bank with Bethlehem. The future annexation of Efrat to Israel would sever the southern West Bank from Bethlehem. The Netanyahu government began working in recent months to advance plans that were halted for years. On December 8, 2011 a tender was issued for the construction of 40 new housing units in the Givat Hadagan neighborhood about 1 km north of the built-up area of Efrat. Another tender for additional 213 units in Givat Hazayit in Efrat was issued on December 29th. Likewise, the government intends to approve the construction of a new outpost northeast of Efrat at Givat Eitam, which would mean the beginning a new settlement. See more here.

c. The settlement of Ariel – the settlement of Ariel is 20 km from the Green Line and creates a barrier in the middle of the West Bank. CBS Figures show that in the last decade the number of people leaving Ariel was greater than the number coming to live in it and its current number of residents is less than 18,000. Nonetheless, on December 8, 2011 the government issued a tender for 277 new housing units in Ariel.

d. Givat Hamatos – during 2011 the Netanyahu government accelerated the planning of a new neighborhood in East Jerusalem meant to undermine proposals for a compromise in Jerusalem such as the Geneva Initiative and complete the barrier between Bethlehem and East Jerusalem.
In August 2011, Stage 1 of the plan (2,337 housing units) was validated and in October a detailed plan meant to allow the realization of Stage 1 and its expansion to 2,600 housing units was deposited. Objections to Stage 2 and 3 plans for 1,362 additional housing units are scheduled to be heard soon. See more here.

Meanwhile, the Har Homa C plan for 983 new housing units southeast of the disputed Har Homa neighborhood was validated. According to the housing ministry’s list of tenders, the plan is ready for immediate execution and tenders for its construction will be published shortly. 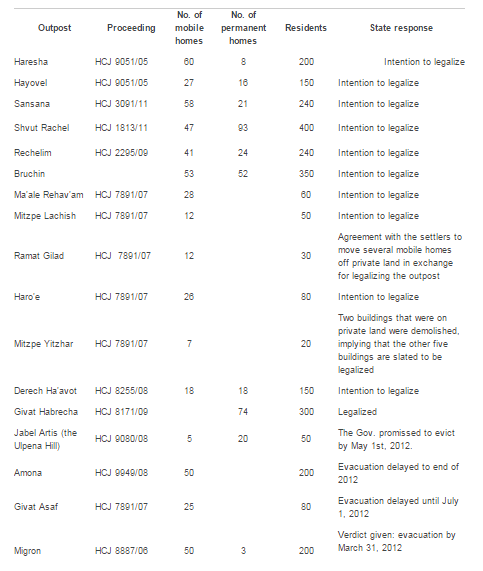