Peace Now and over a dozen Palestinian landowners petitioned the High Court (3303/20) in 2020 against the allocation of about 1,200 dunams of a-Nahla land, in the Bethlehem area for the preparation of a construction plan for a new settlement near Efrat, known as Givat Eitam.

This decision gives a green light for doubling the Efrat settlement in a way that will seriously harm the chance for future peace based on a two-state solution. If the plan is indeed executed, a buffer will be created between Bethlehem and the south of the West Bank, which will prevent territorial continuity for a future Palestinian state, a necessary condition for reaching a political solution and a peace agreement.

The Supreme Court’s verdict shows clearly that the court ignored the claims of the petitioners – Peace Now, and 13 Palestinian landowners from the area – and determined that once the Palestinian petitioners refused the offer to receive some dunams on the edge of the hill, as the state was required by the judges, the petition “has run its course.”

Peace Now: “It is unfortunate that the Supreme Court, which is supposed to protect the underprivileged and strive for equality, chose to avoid responding to the central claim of the petitioners, according to which the allocation is tainted with severe discrimination and inequality, was made solely to serve the settlement project as part of an allocation policy which completely separates the Palestinians from land resources. Everything must be done to stop this dangerous plan, which will seriously harm the chance for peace and the development capacity of the Bethlehem area. The land must be allocated instead to the Palestinians who live there.”

Adv. Michael Sfard, who represented Peace Now and the Palestinian landowners in this petition, stated:

“The allocation to Efrat is a clear expression of the apartheid allocation policy, and this is what we argued before the court. Unfortunately, the court chose not to deal with the argument but to ignore it.”

Watch our video to learn more about the importance of this petition:

Excerpt from the petition:

“For over fifty years of occupation, Israel has done all it can to take care of the establishment and expansion of the settlement enterprise in the West Bank, at the expense of and serious harm to the Palestinian protected residents. In recent decades, the main tool at its disposal for advancing its political-national goals has been the [state land] declaration mechanism and allocation policy. Through the cynical and massive exploitation of this mechanism, Israel has promised vast tracts of territory to expand the settlement enterprise in the Occupied Territories by pushing the needs of the Palestinian population to the bottom, utilizing its public resources, engaging in harsh and deliberate discrimination, and depriving Palestinian villagers. The time has come for the Israeli government to recognize its duty to ensure the welfare of the protected occupied population and to repeal its criminal allocation policy. The allocation of land in the a-Nahla area for the use and needs of the petitioners and the Bethlehem community will be a start toward fixing this [longstanding policy].”

State Land Allocation in the West Bank – For Jews Only 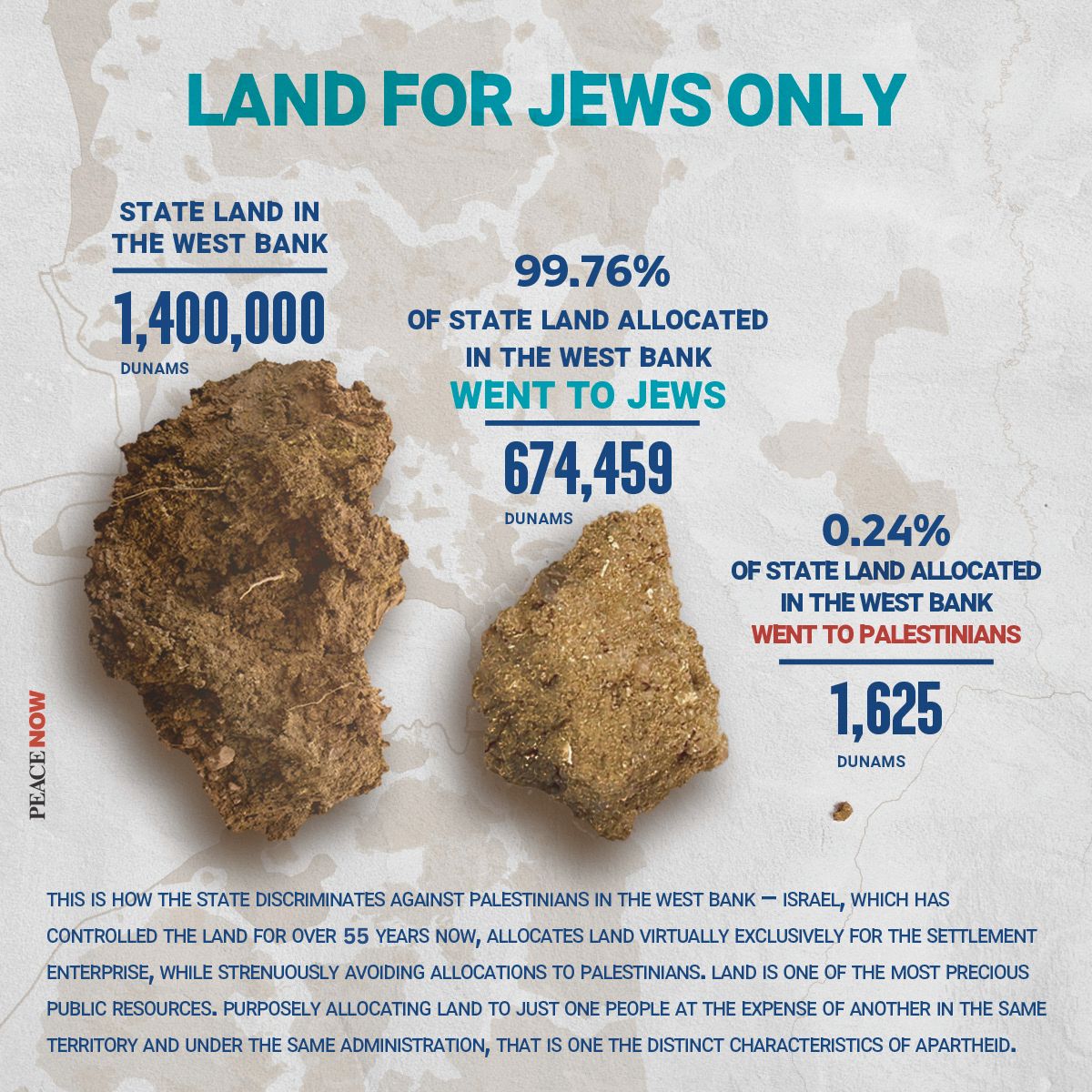 Some 80% of the allocations to Palestinians (1,299 dunams) were for the purpose of establishing settlements (669 dunams) and for the forced transfer of Bedouin communities (630 dunams). Only 326 dunams at most were allocated without strings for the benefit of Palestinians, and at least 121 of those dunams are currently in Area B under Palestinian control. Most of the allocations to the Palestinians (about 53%) were made prior to the 1995 Interim Agreement (the Oslo II Agreement, in which the West Bank was divided into Areas A, B, and C, and transferred control over 40% of the West Bank to the Palestinian Authority).

The significance of the data is that the State of Israel, which has been in control of the West Bank for more than 55 years, allocates the land exclusively to Israelis while allocating virtually no land for the unqualified benefit of the Palestinian population. Land is one of the most important public resources. Allocation of land for the use of only one population at the expense of another is one of the defining characteristics of apartheid. This is further proof that Israel’s continued control of the occupied territories over millions of Palestinian residents without rights and the establishment of hundreds of settlements on hundreds of thousands of dunams has no moral basis.

The decision to allocate a-Nahla land for a new settlement is illegal and immoral. Implementing this plan will severely damage not only the Palestinian landowners and the development capacity of the Bethlehem area but also the ability to reach a future peace agreement and territorial compromise for a future Palestinian state alongside a secure Israel. After 55 years of Israeli occupation in the West Bank, it is time that Israel start to allocate lands for Palestinian development, and not only for settlements.