In yet another attempt to prevent or at least postpone their eviction, the settlers of Migron appealed on Monday, July 2nd, to the High Court of Justice in demand to withhold the eviction. The settlers’ new claim is that they recently managed to buy two parcels and parts of another parcel in the land on which Migron rests. For the remainder of the land, which comprises its majority, the settlers have not made any ownership claims. The alleged purchase documents were transferred to the sole evaluation of the court without allowing the respondents to see them.

The purpose of the appeal is to create further pressure on the court as well as on the government, to postpone the eviction. For now, the most important thing for the settlers is to be able to claim that they have purchased, and less to be able to prove it. If the claim is considered serious, the Government, the public and maybe even the court might support the postponement of the eviction till the ownership issue is clarified (a process that may take years). 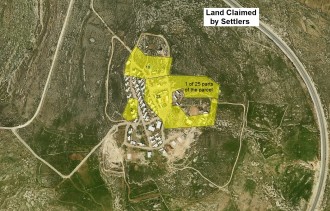 Here are some facts to help understand the latest claims of the settlers:

A.  The new appeal is only about parts of the land on which Migron sits. The majority of the houses of the outpost are on private Palestinian lands that even the settlers do not claim ownership for.

B.  The settlers are refusing to expose their new evidence. Their excuse is that they wish to protect the Palestinian owners. However, in this case the owners are known because they are the ones to have filed the petition to evict the settlers.

C.  In recent years, in all of the cases where there was an intention to evict settlers from private Palestinian lands, they claimed that they have purchased the lands. In all of the cases, their claims were rejected by the authorities and their requests to register the lands on their names were rejected. This was the case in the Ulpana Hill, Givat Assaf, Amona, and Migron as well as in the House of Contention and the Bakri House in Hebron. In some cases the police opened an investigation on suspicion of forgery.
The method goes as follows:  What matters most to the settlers is to be able to claim for purchasing the lands, even if eventually it is proven as false. This way the settlers manage to gain time and public support and postpone the eviction.

D. The settlers claim for two purchases:
1) Parcels No. 2 and 10 were supposedly purchased in March 20th, 2012. The original owner is one of the petitioners in the eviction case who has passed away a year and a half before the alleged purchase took place.
2) A part of Parcel No. 23 was supposedly purchased in June 14th, 2012. The original owner has died in 1961. The settlers have previously claimed that they have purchased the total parcel from him back in 2004 at Orange County, California. At the time, the police opened an investigation and determined that the purchase documents were forged. Despite this, the setters were determined to claim that they have bought the parcel in 2004, and have even petitioned to the District Court in November 2011 on behalf of the same claim. Surprisingly enough, they now claim that they bought part of it from the owner. So if they really did buy it on 2004 – from whom did they buy it now, from themselves?  In any case, the parcel is registered on the name of 25 heirs, and the settlers now claim to have bought part of the parcel from one of the 25 owners.

Today, July 3rd, the court gave an interim order prohibiting the publication of the names of the Palestinian owners, and leaving the purchase documents concealed from the respondents. A hearing should take place on July 15.