The government is advancing a fatal blow to a Two States Agreement: 9,000 housing units in Qalandiya (Atarot)

Without a public debate and without a government debate, the housing minister dropped a political bomb that could land a severe blow to the prospect of peace and two states: the establishment of a new settlement in Qalandiya. A few weeks ago, it was determined that on December 6, the Jerusalem District Planning and Construction Committee will discuss the depositing of Plan No. 764936, prepared by the Ministry of Housing for the construction of 9,000 housing units (the size of a small city in Israel) in the old Atarot/Qalandiya airport. Today (24/11/21) the Local Planning Committee of the Jerusalem Municipality approved the plan, as part of the preparations for the approval at the District Committee on December 6 (the Jerusalem Municipality files its recommendation to the District Committee which has the authority to approve the plan).

The plan is located within the official jurisdiction of Jerusalem, but in practice it is at the heart of a densely populated Palestinian urban continuum, between Ramallah and Kfar Aqeb, Qalandiya refugee camp, a-Ram, Beit Hanina and Bir Nabala.

To this day, the plan has been a piece of paper on the planners’ table with no official or legal validity. If the scheduled hearing is not canceled, on December 6, 2021, the plan will become a real entity making its way through the planning pipelines, and the snowball of the new settlement will start rolling down the hill, and it will be much harder to stop it.

Peace Now: The Minister of Housing has dropped a political bomb and used his powers to establish political facts on the ground without any discussion in the government. This is a very dangerous plan that could land a fatal blow to the prospect of peace and two states. The planned neighborhood puts a wedge in the heart of the existing Palestinian urban continuum between Ramallah and East Jerusalem, thus preventing the possibility of establishing a Palestinian state with its capital in East Jerusalem. The government cannot say that the plan is an “inheritance” from previous governments. There is an active step by the current government to get it approved. If the plan is not removed from the agenda, this severe blow to peace will be registered in the name of Meretz, Yesh Atid and Labour parties which are members of this coalition.

It is a huge plan of 9,000 housing units (for comparison, Har Homa has about 6,000 housing units built according to three main plans), intended for the ultra-Orthodox population with an expected 50,000 residents, in the size of a small city in Israel. The plan is at the heart of the urban territorial Palestinian continuity starting in Ramallah, through Kfar Aqeb and Qalanadiya, to Beit Hanina and Shuafat where hundreds of thousands of Palestinians live. The plan was meant to sever the Palestinian continuity and become an Israeli enclave which would prevent Palestinian development of the most central and important metropolin in the future Palestinian state, the Jerusalem-Ramallah-Bethlehem metropolin. Founding an Israeli neighborhood ranging thousands of housing units, would make any future two state based agreement difficult due to the lack of Palestinian continuity and harming the possibility to found a Palestinian capital in East Jerusalem.

The planning process and the authorities involved

Over the years there has been talk of establishing a new settlement in the Atarot-Qalandiya area, but these were mostly statements of intent. In December 2015, Peace Now revealed that the Ministry of Housing had allocated NIS 2 million to begin the planning for about 10,000 housing units in Atarot, but since then the plan did not appear to be advanced. In February 2020, the Ministry of Housing submitted the plan to the Jerusalem Municipality for the bureaucratic stage of preparing the plan for approval. However, the discussion of depositing that was set for December 6, is already the essential stage, where the plan becomes from an idea and a proposal, into a real legal entity. After the approval for deposit the plan is presented for public review, and after hearing the objections of the public it is approved and validated.

It is important to emphasize that the initiator of the plan is the Ministry of Housing. Most of the land in the plan is considered “state lands.” The government (the Ministry of Housing and the Israel Land Administration) has direct control over the promotion of the plan. The Israeli government can decide not to promote the plan or even shelve it, and there is no obligation to bring it to approval.

Usually a plan approval process takes between one to two years, and then the tender process for the construction takes a similar amount of time. So if the plan is not stopped – within a few years bulldozers might start the construction.

The Planning Phase
The District Planning and Construction Committee, which is a professional body of relevant planners and professionals in the Planning Bureau, is responsible for approving construction plans in Israel. The plan approval procedure includes the following steps:

*  Publication of the plan for public review (“Depositing”) – The plan is published in newspapers, and the public is given 60 days to submit objections.

*  Publication of Validation – When all the bureaucratic corrections are completed, the plan is published in the newspapers as valid and within 15 days from publication, a construction permit may be issued and construction can begin.

The process of approving the plan from the date of approval for the deposit until the publication of the validation usually lasts about a year to two years.

Land ownership – an entrepreneur who wants to build in accordance to an approved plan should acquire the rights to the land. In the case of “state lands”, the Israel Land Authority publishes a tender inviting contractors to submit proposals to purchase the rights to build and market the apartments. The tender procedure usually takes about six months to a year. In the case of private land there is no tender, and the private owners are allowed to apply for a construction permit immediately upon the approval of the plan.
Construction permit – the local committee for planning and construction of the local authority (in this case of the Jerusalem Municipality) examines the construction program proposed by the developer and makes sure that it complies with the plan provisions and building regulations on safety, traffic, electricity, water, etc. The bureaucratic procedure of construction permit can take several months or a year. After having a valid construction permit one can immediately start construction.

If the plan is not halted, and everything works fast and smoothly, the construction of the new settlement may commence as early as within 4 years.

Most of the plan counts as “state lands”, probably since the days of the British Mandate when the airport was built. This fact enables Israel to build the settlement without the need to confiscate lands from their Palestinian owners. At the same time, for the parts that are owned by private owners, the plan is aimed to create a procedure of “unification and division” (without agreement) according to which all land owners get a certain part according to the value of the land they own. It should be noted that the plan aims to demolish several buildings and Palestinian housing units that have been built in the area over the years.

The currant works on the ground in Atarot airport

In recent months massive infrastructure work had begun in the area of the planned settlement. The works are for a temporary parking lot for 300 busses and it is probably not connected to the planned settlement. The establishment of the temporary bus parking comes after the States’ Comptroller criticized the Ministry of Transportation for a lack of 555 parking places for busses in Jerusalem and a need for hundreds more in the coming years. The works are done in an investment of some 18 million Shekels, and according to the Jerusalem Municipality without a construction permit (claiming that such a permit is not required). 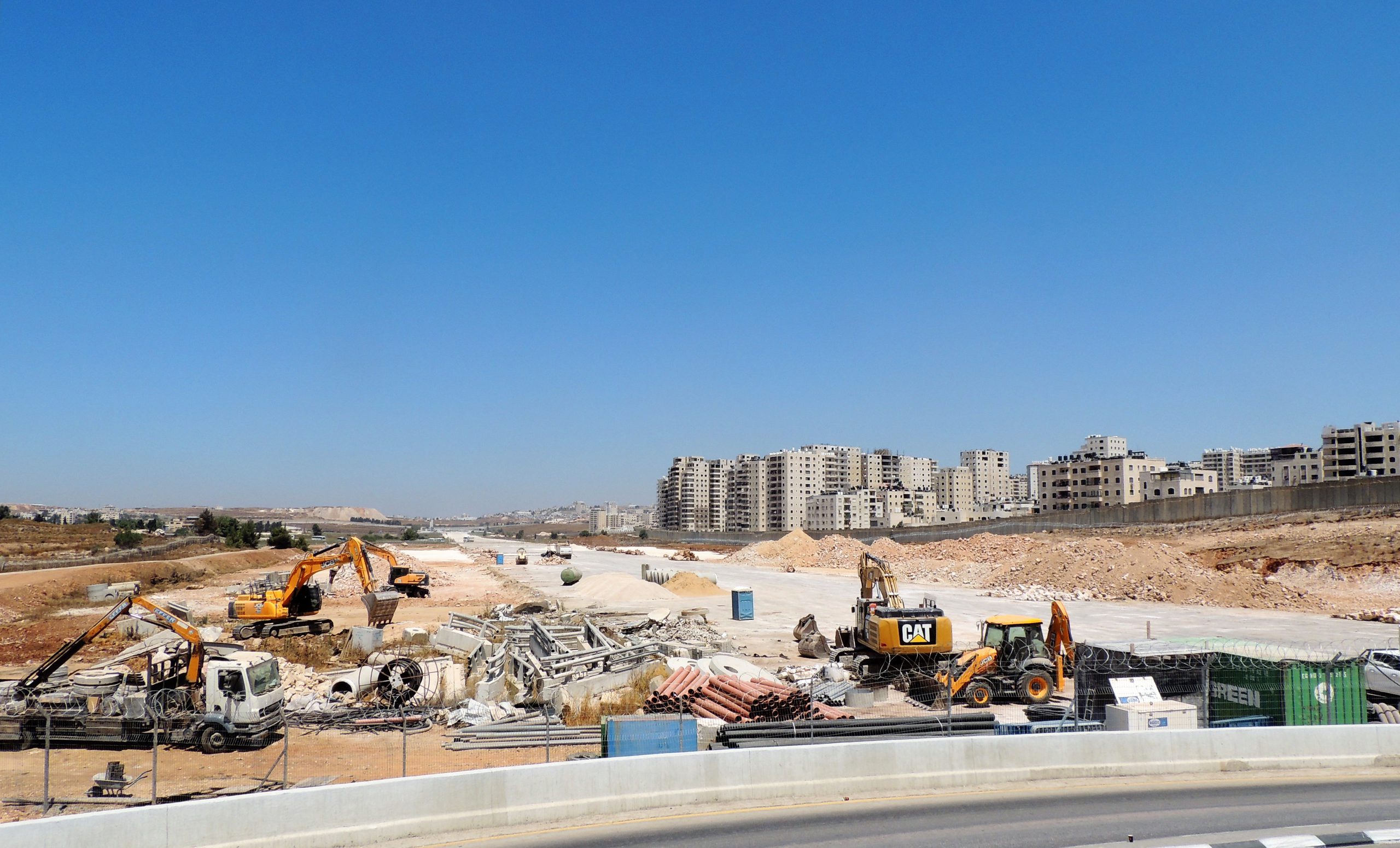 Works in the Atarot/Qalandiya airport for parking for busses, July 2021

Atarot-Qalandiya Airport with Kfar Aqab in the backgound