Among the plans submitted for approval:

Retroactive approval of three illegal outposts; a fivefold expansion of the Shvut Rachel settlement south of Nablus with 534 new housing units; doubling the size of the Dolev Settlement west of Ramallah with 454 housing units; 120 housing units in Kiryat Arba next to Hebron; Adding 332 dunams to the Ariel Industrial Zone; and 1061 housing units in Beitar Illit west of Bethlehem.

We noticed that for the first time since the Coordinator of Government Activities in the Territories (COGAT) began posting press releases on meetings concerning plans approvals in the settlements, the COGAT spokesperson has decided to reduce by hundreds the number of units reported, apparently hoping to minimize international criticism. Usually, the COGAT spokesperson inflates and maximizes the number. (See below)

Peace Now: “The approval of these construction plans in the settlements is a slap in the face, not only to the prospect of peace, but also to the possibility of some future Palestinian economic development. The construction of illegal settlements stands against the Israeli interest, and the only reason to approve these plans is a desire to please the right-wing parties. Peace supporters in the government must not agree to this destructive decision.” 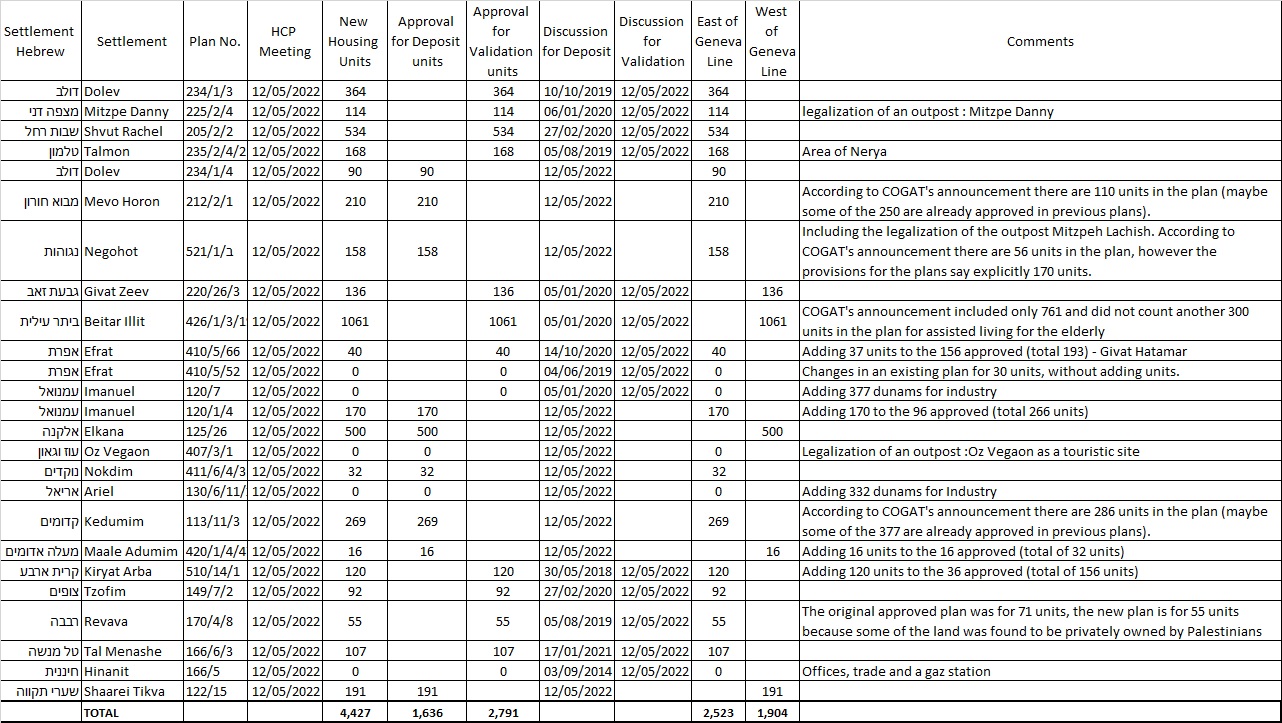 Last Friday at noon (06/05/22), a press release was issued by the Coordinator of Government Activities in the Territories, according to which the Higher Planning Council of the Civil Administration (HPC) will convene this Thursday (12/05/22) to approve the plans for “3,988 housing units” in the settlements. At the same time, the official schedule was published on the Planning Office´s website.

A review of the official schedule and the plans’ provisions to be approved reveals that the HPC is expected to approve about 4,427 housing units in the settlements. The majority of these settlements are located deep in the West Bank, and they cannot be annexed to Israel as part of a future land swap in an agreement between the two sides.

This will bring the number of housing units promoted by the “government for change” formed almost one year ago, to about 7,107 housing units, following the approval of 2,680 housing units in the settlements by the HPC in November 2021.

2,523 housing units are located in settlements east of the proposed Geneva Initiative border, i.e., settlements likely to be evacuated in a two-state agreement.

Among the plans submitted for approval:

Mitzpeh Danny: An outpost established in February 1999, under Netanyahu’s government, partly on private Palestinian land. The plan approves the construction of 114 housing units on lands that have been declared as “State land,” surrounding dozens of dunams of private Palestinian land where construction is forbidden. Still, it is hard to believe that the landowners will have the opportunity to reach them.

The Oz veGaon Outpost: This outpost was established as a tourist site in the summer of 2104, south of Bethlehem, next to the Gush Etzion juncture, where educational activities, campings, and outdoor training are held for students and organized groups. The plan approves the construction of buildings and tourist attractions as well as a hotel with 180 rooms and a conference hall.

The Givat HaBooster Outpost (Mitzpe Lachish): Established under Sharon’s government in January 2002, southwest of Hebron. The outpost was initially used as a residence for young people in lightweight constructions. Over the years, it developed into an outpost with homes and families permanently living in the illegal buildings. An eviction order was issued against the outpost but never implemented. The plan seeks to establish 158 housing units in the outpost.

In order to avoid announcing the establishment of new settlements, these outposts are approved as “neighborhoods” belonging to existing settlements: Mitzpeh Danny – as part of Ma’ale Michmash; Oz veGaon – as part of Migdal Oz; and Givat HaBooster – as part of the Negohot Settlement. 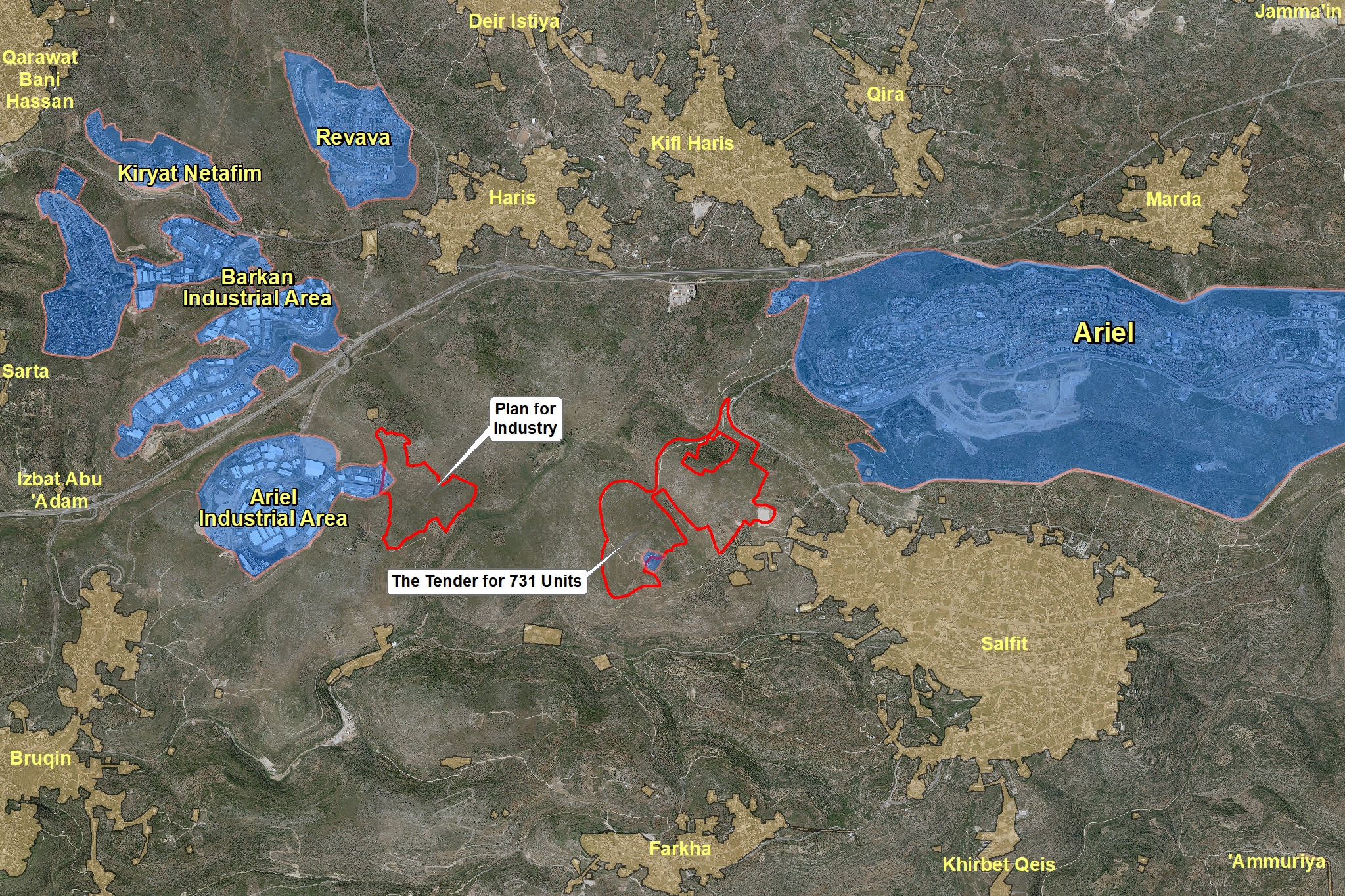 The list of plans also includes extensive plans in relatively small settlements located deep in the West Bank, such as:

The plan in Ariel furthering the intention to build a physical buffer between the Palestinian town of Salfit and the surrounding villages. The government had already started this move when in October 2021, a tender was issued for the construction of 731 housing units west of Ariel. Now, with the plan for the industrial area, the “gaps” will be filled and no potential space for the development of Salfit will be available (see map). This is one of the most severe damages to the functioning and development capacity of the central region in the West Bank. It virtually condemns the surrounding villages and towns to be disconnected from each other without any chance of sustainable development in the future.

Watch here a video explaining the consequences of Ariel on the development of Salfit and its surroundings:

C. Plans for the Palestinians?

It should be noted that some journalists wrote that the government also aims to approve construction plans for the Palestinians. As we are writing these lines (10/05/22), no agenda has yet been published to affirm this. There is no doubt that the attempt to involve the decision to approve these massive construction plans in the settlements with the promise of advancing some projects for the Palestinians, is intended to produce a semblance of balance (as if a balance between the occupied and the occupier is possible). In addition, this aims to soften criticism of Israel and perhaps, even try to dismiss the accusations of apartheid in the settlements.

We should also consider that in recent years, we have heard mainly government statements regarding the intention to approve plans for the Palestinians when in reality, almost nothing has been approved. The current government also tried to “balance” the approval of thousands of housing units in the settlements by promoting six plans for the Palestinians, including 1,300 housing units, but most of those units were already built, and they were subsequently legalized. The bottom line is that between 2009-2021 a total of 81 building permits were granted to all Palestinians living in Area C, while in the settlements, about 24,520 housing units were built. (The data regarding the building permits is according to the data provided by the Civil Administration following a number of freedom of information requests, mainly by Bimkom. The data regarding the building permits in the settlements is according to the start of construction provided by the Central Bureau of Statistics).

Reducing the numbers to confuse our partners

Peace Now has noticed that, as opposed to all the previous press releases published by COGAT on the approval of plans in the settlements, last Friday’s statement announced 900 housing units less than COGAT’s usual count. This might have been done in good faith, but we might look at it as another attempt to soften criticism of Israel and perhaps, God forbid, to mislead the friends of Israel across the globe. The way this was done has to do with the fact that the housing units in each plan can be counted in two different ways: the total number of units of the plan; or the number of new units added in the plan.

For example, when there is an old construction plan in the area that was approved around 20 years ago, according to which it is allowed to build 100 units in a specific area, and today one wishes to expand and add another 50 housing units (whether the houses have already been built or not), a new plan is commonly required for 150 housing units. When counting the number of housing units in the new plan, it can be stated, without lying, that this is a plan for 150 units. However, if you want to count only the new units that were added to the approved plan, it must be stated that this is a plan to build 50 units.

In every press release from COGAT to date, such programs have been introduced as plans for 150 housing units, while Peace Now has chosen to count only new units, and therefore, our count is slightly lower than the count that COGAT published in its press releases. Both ways of counting can be legitimate as long as it is persistent and the methodology is explained.

Here below, we show some examples from COGAT’s schedule for this coming Thursday:

Peace Now has calculated and found that the maximum number of housing units in the plans that were submitted for discussion on Thursday is 4,899 units, and so they might have presented it in previous years. There were only 3,988 housing units in this week’s announcement, i.e., 901 units less. We can only hope that this is not an attempt to deceive the friends of Israel across the globe. 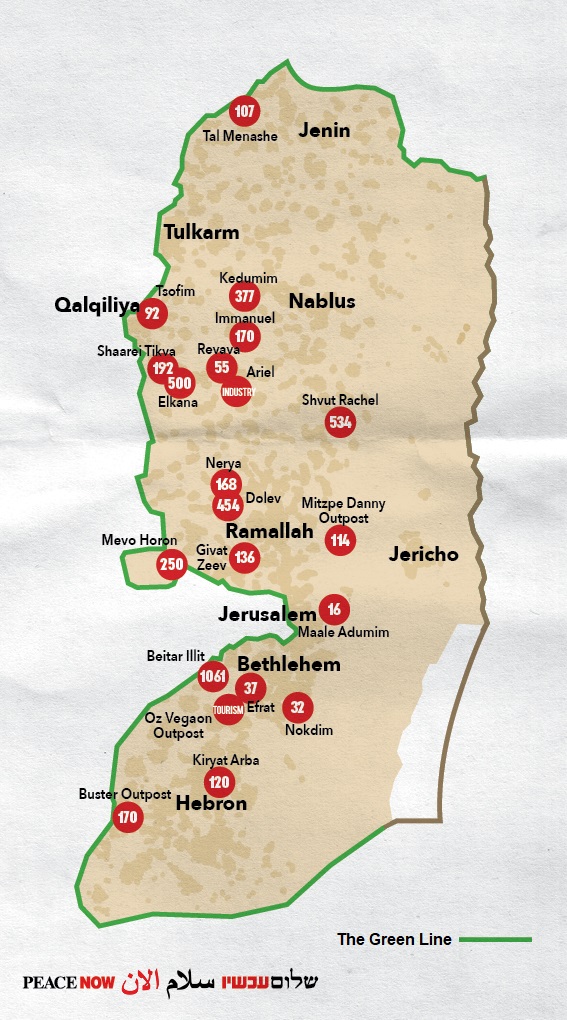