*** Update from 1/11/21: The Higher Planning Council convened today and approve all 6 plans for 1,303 units for Palestinians as detailed below.

*** Update from 27/10/21: The Higher Planning Council convened (after a delay of 4 hours because of a strike of the Civil Administration’s workers) and approved all the plans on the agenda. A total of 2,860 units in 30 settlements. These units are separate from the 1,355 units that were tendered by the Ministry of Housing on Sunday (24/10/21).
Download the full list of plans approved, as excel file here.

The Higher Planning Council of the Civil Administration (HPC) will convene on Wednesday, 27/10/21, for approving 30 plans for 2,860 units in the settlements, and on Monday 1/11/21, it will discuss the approval of 6 plans with 1,303 units for Palestinians in Area C. In August the HPC was supposed to discuss plans in the settlements and in Palestinian villages but the meeting was canceled due to a strike declared by the workers of the Civil Administration. While in August the agenda for the settlements included 21 plans with 1,956 units, to the coming discussion 9 plans with nearly 1000 units were added. To the list of Palestinian plans from August (5 plans with 856 units) there were added 2 plans, and one plan, for the village of Khirbet Zakariya was removed due to pressure of settlers from the Gush Etzion area.

The plans for the Palestinians

Israeli policy in the Occupied Territories is preventing almost all Palestinian construction and development in all territories subject to its planning authority in the West Bank. The result is that the Palestinians are prevented from building and developing about 60% of the West Bank (“Area C”). Along with preventing permits and plans, Israel pursues a tough enforcement policy and demolishes hundreds of Palestinian homes and structures each year. In recent years, almost no new plans have been approved for construction in Palestinian villages in Area C. International pressure (as well as pressure by officials in the Israeli Ministry of Justice who understood that such a blatant policy of discrimination against Palestinians could be considered a serious violation of international law), brought to some Israeli statements and declarations of intent to approve construction for the Palestinians, but in practice almost nothing was approved. This was the case in 2017 after the government decided to approve about 5,000 housing units in Qalqilya and under right-wing pressure the decision was revoked, and so it was in July 2019, after the cabinet decided to approve 700 housing units for Palestinians in Area C – in practice nothing was approved.

The plans for Palestinians to be discussed at the HPC on November 1st (the number of housing units are taken from the Civil Administration press release):

All of the plans are the initiative of the villages themselves and not of the Israeli Authorities, and excluding the plan for Khirbet Abdallah Younas which is brought for validation, all the plans are brought to approval for deposit, which is the first phase of approval.

It is important to note that almost all the plans have been on the HPC’s table for many years and are awaiting approval, along with many other plans for Palestinians. A serious amount of the housing units in the plans (estimated as more than half) are for houses that have already been built and exist on the ground and the plan is intended to legalize them in retrospect, so that in the end it is a very small expansion of the Palestinian villages and a drop in the ocean in terms of real Palestinian development needs.

It should be noted that even permit applications for Palestinians under existing approved plans (usually according to the old British plans) are almost universally rejected. According to information received from the Civil Administration following requests under the Freedom of Information Law (mainly by the Bimkom organization), in the decade between 2009 and 2018: 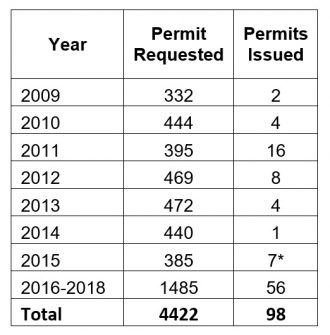 Approval of construction permits for Palestinians

To read more about the planning for Palestinians, see Bimkom’s thorough report here.

The Plans for settlements

Next Wednesday, 27/10/21, the Higher Planning Council will convene to discuss 30 plans in the settlements, for the construction of 2,860 housing units, 90% of them are in settlements deep in the West Bank, which Israel will have to evacuate under a permanent agreement (according to the agreement model of the Geneva Initiative).

Among other things, the Planning Council intends to approve a massive expansion of isolated settlements, such as: 377 housing units in Kedumim (near Nablus), 286 housing units in Har Bracha (adjacent to Nablus), 628 units in Eli (between Ramallah and Nablus) and a plan for 399 housing units in Revava in the Salfit area.

Two outposts are been legalized in the plans: the plan in “Michmash East” which is a code name of the illegal outpost of Mitzpe Danny, and the plan for Haroeh Haivri outpost, that was built very close to Khan Al-Ahmar, and now is being approved as an educational institution. 1,227 of the housing units will be brought for approval for deposit, which is the first step in the planning process; And the rest are brought for final approval for validity. For more on the planning procedures in the West Bank, click here. 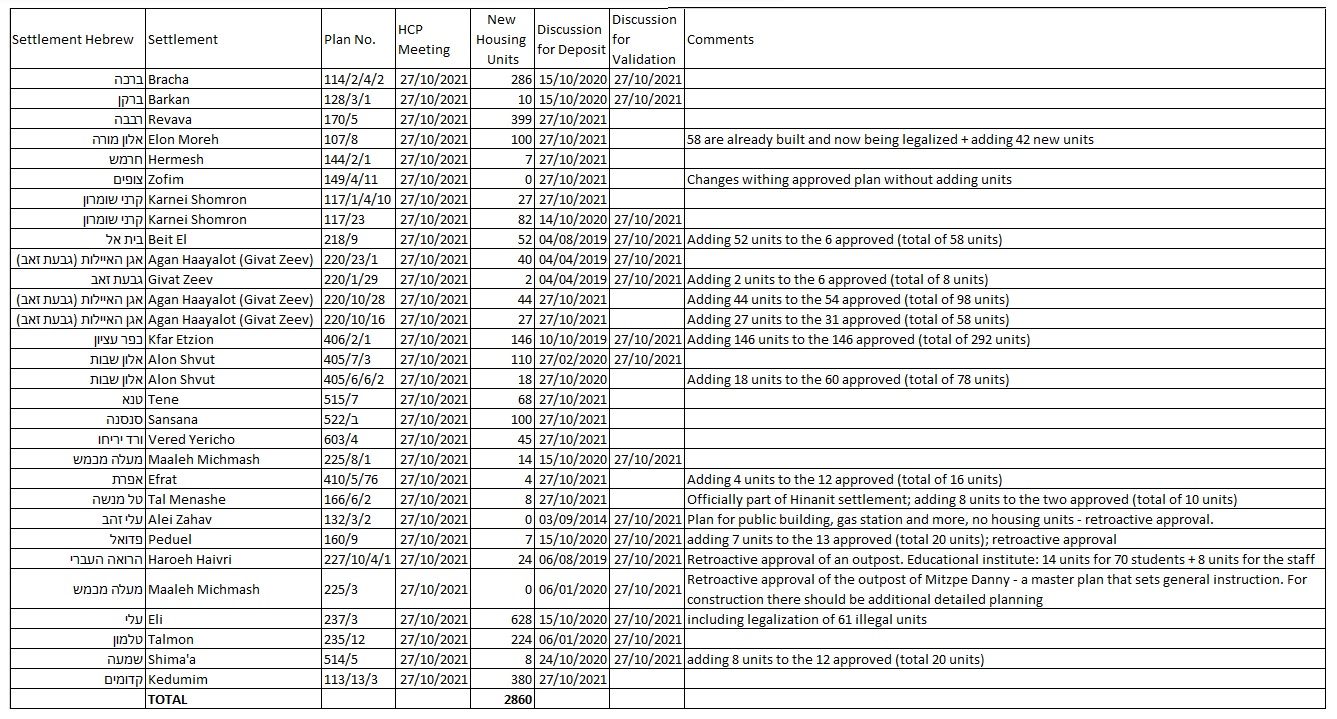 The Civil Administration’s press release lists 3,144 housing units, while Peace Now’s count is of 2,860 units. This is because some of the plans are plans for adding additional units to already approved units. for example, a plan to add 2 units to a building with 2 units is a plan for 4 units, but Peace Now counts only the 2 new units to avoid double counting of housing units.