The Army radio exposed today that on March 10, 2016, during Vice President Biden’s visit to Israel, the Civil Administration’s Head of the Government Property signed a declaration according to which 2,342 dunams (580 acres) south of Jericho are now government property. This declaration of state land comes two months after it was reported that the Minister of Defense approved a declaration of 1,500 dunams as state lands in an area south of Jericho. It appears that the January approval by the MoD permitted the land declaration which is now being implemented. However, the size of the land declared is larger than what was published in January and includes 2,342 dunams. The declaration, which is in fact a confiscation, was meant for the expansion of nearby settlements as well as for trade and tourism projects operated by the settlers. This is one of the largest declarations in recent years, and it is another illustration of the government’s policy of land confiscation, including those far beyond the green line and the separation barrier.

Peace Now: This declaration is a de-facto confiscation of Palestinian lands for the purpose of settlement. Instead of trying to clam the situation, the government is adding fuel to the fire and sending a clear message to Palestinians, as well as to Israelis, that it has no intention to work towards peace and two states. Netanyahu proves yet again, that settler pressure is more important to him than the deteriorating security situation. 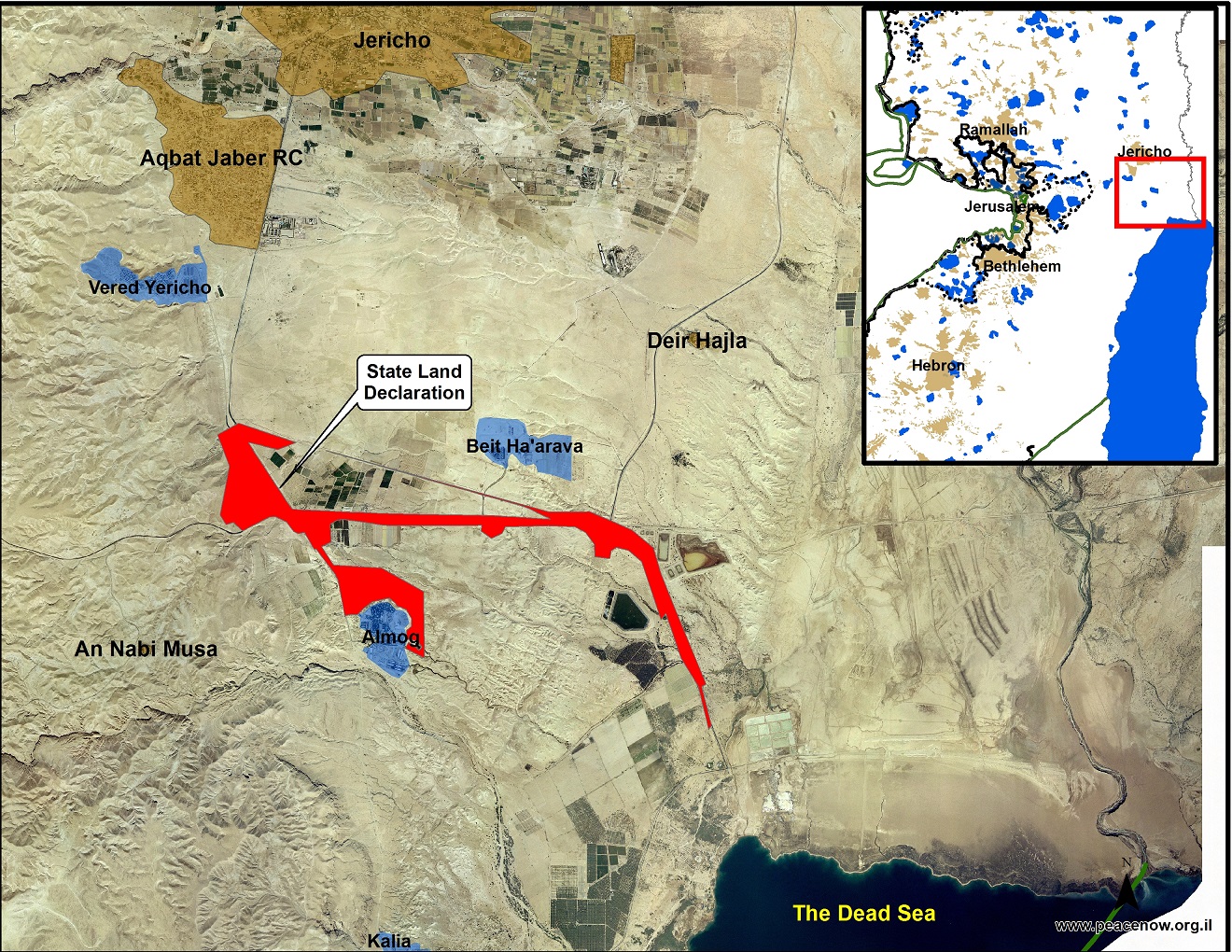 In August 2014, close to 4,000 dumans were declared as state land in the Bethlehem area, something which lead to massive international criticism on the Israeli government. In April 2014, another 1,000 dumans in the Bethlehem area where declared as state lands. These two declarations where highly unusual, as in the last several decades Israel’s policy was not to take over additional lands for the purpose of settlements. The current declaration illustrates the fact that Israel has changed its policy and returned to the method of land confiscation through large-scale declarations of state lands implemented in the pre-Oslo period during the 1980s.

Purpose of the declaration:

Peace Now’s assumption is that the purpose of the declaration is to maximize land takeover in the Jericho region in order to prevent potential for Palestinian expansion in the area; and to allow for the promotion of several new plans. The existing plans that we know about in the declared include:

1. Plan number 604/3 – for the construction of 358 housing units in the settlement of Almog on 687 dunams. The plan was approved for validation, but was pending until the land ownership issue is resolved.

2. Plan number 600/4 – 5,000 dunams along route 1 (Jerusalem-Jericho) for trade and tourism. The plan was approved for validation but was pending until the land ownership issue is resolved. Some touristic sites and souvenir shops are already operating in the area.

3. Plan number 600/2 – for trade and roadside services over 21 dumans. This plan is for the gas station “Almog Al HaDerech” which has been operating in the area for many years. It seems that here too, there has been an issue of land ownership.

Location of the declaration:

The area south of Jericho is located deep in the West Bank and far beyond the green line and the separation barrier. In recent years the struggle over control over the corridor between Jerusalem and Jericho has highly intensified. The Israeli governmentincreased demolitions of Bedouins along route 1 (between Jerusalem and Jericho) and at the same time it continues to promote plans for the expansion of settlements along the road, including in Ma’ale Adumim and in E-1. The declared area is at the eastern edge of this corridor, and control over this area is meant to split the West Bank in half and prevent the possibility to establish a viable and contiguous Palestinian State. 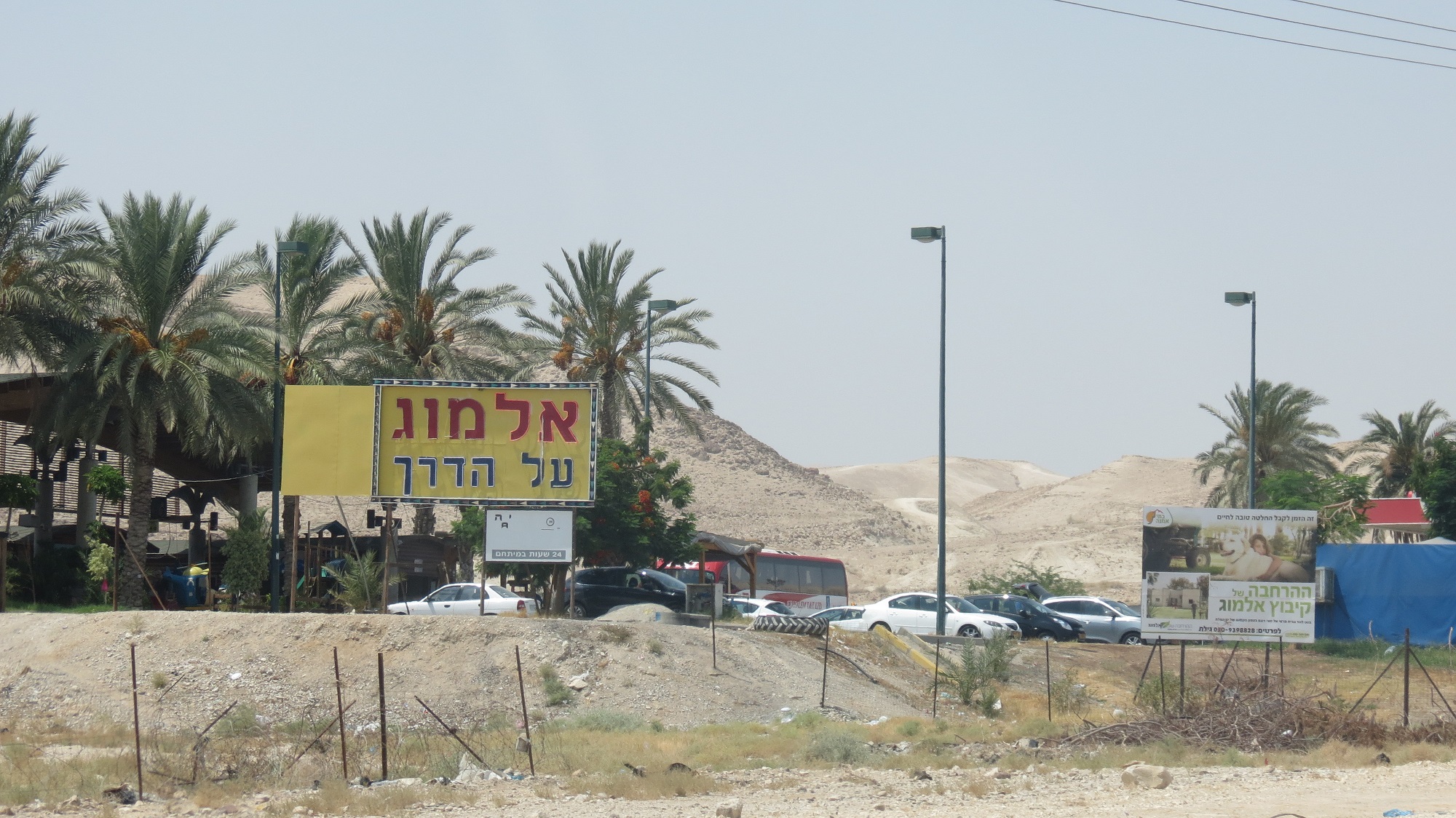 The Commercial Area in plan 600/2, legalized by the declaration.