Deepening of the settlement project, dispossession and oppression

This report shows that despite its explicit commitment to a status quo with all matters related to the occupation, a year after the government is founded, the policy of this current government not only continues the policies set by the previous Netanyahu governments, but deepens the settlement project, the dispossession and the oppression of Palestinians in the Occupied Territories.

Planning – There was a 26% increase, with the promotion of plans for 7,292 housing units in the settlements, compared to an annual average of 5,784 housing units in the Netanyahu governments (the average includes the years 2012 to 2020 in which information is available).

Tenders – The Bennett-Lapid government has issued tenders for the construction of 1,550 housing units in the settlements, compared to an annual average of 1,343 housing units per year in the Netanyahu governments (an increase of 15%).

Construction Starts – A 62% jump in construction starts in settlements with the entry of the new government. 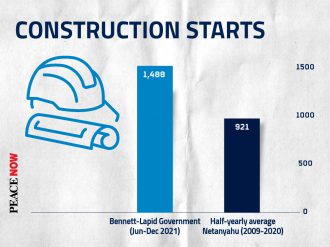 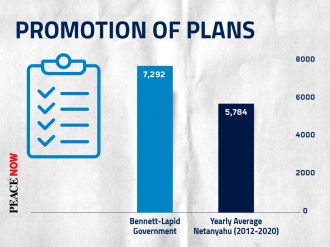 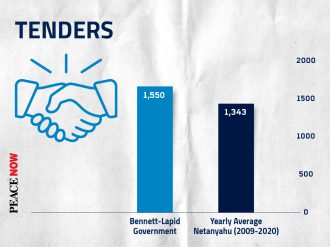 Strategically Lethal Plans – The Bennett-Lapid government furthered a number of strategically lethal plans that especially harm the chance for Palestinian development and continuity, the two-state solution and reaching a political agreement. Among other plans the government promoted a new settlement in Atarot, the E1 plan, the expansion of the National Park around the Old City, a new settlement near Ariel, a plan that connects Har Homa and Givat Hamatos, the beginning of the construction of a new settlement in Hebron (for the first time 40 years) the completion of the plan in E2, and more.

New Outposts – Under the Bennett-Lapid government there were six new illegal outposts founded: Givat Hadegel in the South Hebron Hills, Karnei Re’em in the Salfit area, Mevo’ot Jericho Farm north of Jericho, Julius Farm in the North of the Jordan Valley and the Ohavey-Ya outpost West of Bethlehem.

Support for the eviction of families in East Jerusalem in favor of settlements – The Bennett-Lapid government has been called upon several times for the burning issue of displacing Palestinian families in East Jerusalem. The Supreme Court sought the Attorney General’s position on the issue, and in fact gave the government a convenient opportunity to assist in preventing the massive expropriation. However, the government preferred not to intervene and even to support the evictions.

Demolitions – The Bennett-Lapid government deepened the policy of expulsion of Palestinians and their restriction to the constrained enclaves in Areas A and B. As of the 6/6/22, the Civil Administration had demolished 639 Palestinian owned structures in Area C, causing 604 people to lose their home. This is a 35% increase compared to the average of demolitions in the Netanyahu years (474 structures per annum). In East Jerusalem there were 189 structures demolished and 450 Palestinians had consequently become homeless. This is a 59% increase compared to the Netanyahu years. In addition, there had been attempts to displace entire communities in Humsa and in Ras a-Tin in the Jordan Valley, and in Masafer Yatta in south Hebron Hills. 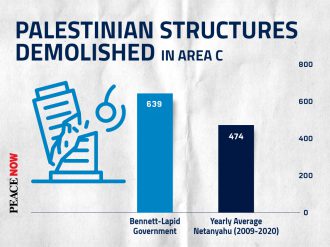 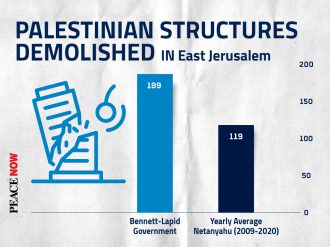 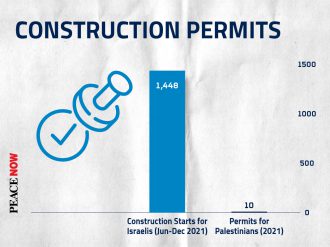 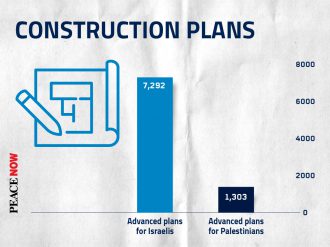 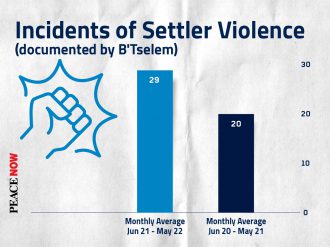 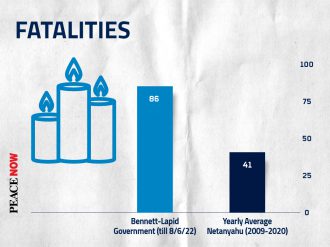 Construction Permits – In the entirety of 2021 there were only 10 building permits granted for Palestinians, compared to 1,448 housing units that started to be built in the settlements in the second half of 2021 only (and 2,526 in the entirety of the year). This shows the discrepancy between the two different policies aimed at the two populations in the Occupied Territories, Palestinians and Israelis, i.e. the apartheid tendencies continued by the current government.

Plans – Whereas in the settlements 55 plans were approved for 7,292 housing units, the government approved only 6 plans for Palestinians with 1,303 housing units in the entire Area C.

Settler Violence – Under the Bennett-Lapid government there has been an increase of approximately 45% in settler violence incidents against Palestinians and their property, (from an average of 20 incidents per month to 29 cases, documented by B’tselem).

Declaration of Nature Reserves – In an unusual step, the Bennett-Lapid government declared 22,000 dunams of land as a ‘nature reserve’ in the Nachal Og area south of Jericho.

Fatalities – Under the Bennett-Lapid government there were 86 Palestinians killed by security forces in the West Bank alone, in comparison to the average under the Netanyahu governments that was approximately 41 killed per annum (according to B’tselem count).

The Temple Mount/Al-Haram A-Sharif – The Bennett Lapid government continued the trend of the Netanyahu government in changing the reality in the Temple Mount and the erosion of the status quo.