The lawsuits are part of a series of dozens of eviction lawsuits filed by people from Ateret Cohanim settlers group against some 84 Palestinian families living in the Batan al-Hawa in Silwan, putting a community of 700 people in danger of being evicted. The settlers’ claims are based on the fact that in the late 19th century the land was allocated by its Jewish owners to a Jewish trust for the benefit of the poor Yemenite Jews of Jerusalem. Today, in the name of the same trust, settlers seek to evict the Palestinian families who built their homes lawfully on that land after 1948.

Since 2015, 14 families have been evacuated from Batan al-Hawa. The three judgments this month ordered the eviction of another 11 families with 67 persons, and another some 80 other families are in court in eviction cases. In all cases of the past month, families intend to appeal to the district court, a procedure that usually takes several months to a year.

For more information on the lawsuits and the assistance of the authorities to the settlers, see the Peace Now and Ir Amim report here.

Peace Now: “This is an attempt to displace a Palestinian community and to replace it with an Israeli one, in the heart of a Palestinian neighborhood in East Jerusalem. The settlers could not have succeeded without the Israeli authorities’ close support and assistance. In addition to the hard blow to the prospects for a two-state solution by preventing a Palestinian capital in East Jerusalem, this is an injustice and an act of cruelty to throw out families who have lived lawfully in their homes for decades. The settlers are using the right of return to Jews to properties lost in 1948 War, and by doing so they lose any moral ground for the Israeli claim that Palestinian property lost in 1948 will not be returned to their owners”

The pressures exerted by the settlers

The Duweik family is one of the first families to receive an eviction lawsuit from the settlers, back in 2007. Since then, the family has been fighting in court, in long, exhausting and very expensive proceedings, under heavy pressure from the settlers, in an attempt to save their home.

The settlers exert pressure as part of a strategy aimed at exhausting and impoverishing the Palestinian families until they “voluntarily” agree to leave the house and receive some financial compensation. For the settlers, it is best that the evacuation will be done by consent: first, because they are thus legitimized, and can present the situation as if it were a “normal” real estate transaction between two equal parties: one party wanting to buy and another wanting to sell. It is as if the settlers’ motivation is only a matter of real estate, and as if it is not in the area at the heart of the Israeli-Palestinian conflict, hundreds of meters from the Temple Mount, Al-Haram a-Sharif.

Besides this tactic to create an air of legitimacy, consent can save settlers from court proceedings and the risk of loss. Therefore, even when the legal basis for the eviction claim is alleged to be legal rights that have come to the settlers (in this case, ownership of a Jewish trust from before 1948), they will always prefer to reach some kind of agreement with the families.

In order to get the Palestinians to agree to a sale, they put pressure. Four years ago, Nir Hasson of the Haaretz newspaper revealed some of the actions of Ateret Cohanim to exert pressure on the Palestinians, two years later Hasson revealed more of the way the settlers work.

The Duwiek family had to spend a fortune out of pocket to pay attorneys, experts and all legal expenses to defend themselves in the courts for 13 years. The long struggle is exhausting and impoverishing, and the settlers are taking advantage of this by presenting enticing offers – promising large sums of money, insurers finding alternative housing, and a foundation for a new life for the family. In the case of Mazen Duweik, the father of the family, who is also a dialysis patient, they even offered to arrange for him a kidney transplant donor, if he only agreed to sell the house to them.

And alongside the tempting offers, there are also the threats. The settlers send messages to families saying that if they would not willingly evacuate, not only would they lose in court and be thrown into the street with nothing, the settlers would also sue them for “usage fees” for all the years the Palestinians sat in the property, as a kind of rent.

This is what happened to Abdullah Abu Nab, a member of the family of Palestinian refugees who came from West Jerusalem in 1948 and settled in Batan Al-Hawa, who was one of the first to be sued by the Ateret Cohanim people in the name of the Jewish trust. Abu Nab knew that if he lost in court he would not only lose the house but would have to pay huge sums, and yet he would not surrender and refused to sell the house.

In the end, the court ruled to evict Abdullah and his family from the house, and that he should pay the settlers a sum of about NIS 500,000. In 2015, police evicted the Abu Nab family from its home and settlers came in. The settlers chose to insist, even after receiving what they wanted and entering the house, and opened proceedings against Abdullah Abu Nab to receive the NIS 500,000.

They did so even though they knew that it was a poor family that would not be able to pay off the huge debt, and all they would gain would not be the debt payment, but that Abdullah and his children would go bankrupt and find it difficult to recover for years to come. But for them the message to all the neighbors was important: If you do not agree to sell the house and insist on fighting in a court of law – you will end up not only without a home but also with huge debts, like Abduallh Abu Nab. 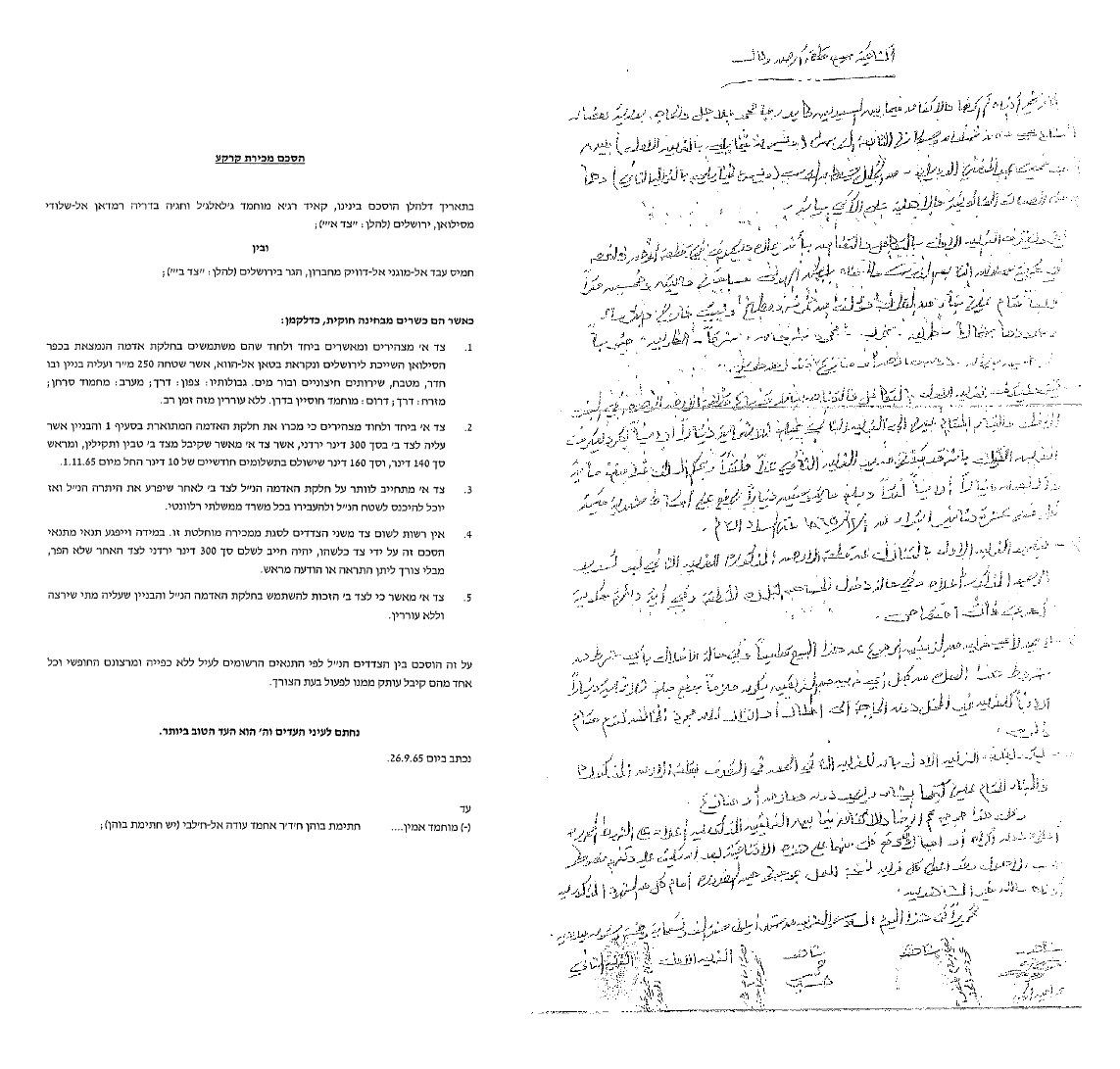 The Purchase Deed of the Duweik family from 1965

A Discriminatory Law: The Legal and Administrative Matters Law 1970

The Duweik family’s home in Silwan began to be built before 1967 when East Jerusalem was under Jordanian rule. The father of the family purchased the land in two deals in 1965 and 1967, from a Palestinian landowner who held the land for years. Fortunately for the Duweik family, the purchase documents were kept and they were able to present them in court. The court did not deny the purchase but ruled that even though they had purchased the land properly, and even though more than fifty years had passed since the purchase and no one had questioned their ownership, the right of the settlers who represent a Jewish trust from over a century ago is stronger than the Duweik’s.

The Duweik family ruling, as well as the other judgments, goes down to the details of the statute of limitations law and the real estate laws to show that according to the wording of the various clauses in the law and in light of the role of the Israeli General Custodian in the Jewish properties in East Jerusalem, the families should evict their homes.

All of the settlers’ cases are based on the Legal and Administrative Matters Law that was enacted by the Knesset in 1970. The law was legislated in order to deal with many different issues concerning the areas and people annexed to Jerusalem in 1967. One of those issues was the status of properties owned by Jews before 1948.

In the 1948 war, some 35,000 Palestinians fled or were forced to flee their homes in West Jerusalem, and about 2,000 Jews fled or were forced to flee East Jerusalem, mainly from the Jewish Quarter of the Old City. The Legal and Administrative Matters Law was intended to correct what it considered to be a historical injustice by restoring the property to its original Jewish owners. However the law was not applied to Palestinian properties. It turned out that in the same city, as a result of the same war, two populations lost properties but only one is entitled to repair the historical injustice and return to its property, while the second , which sometimes lives a few hundred meters from its properties, cannot return them. This is the original sin of the law and of the settlements in Batan al-Hawa.

An examination of the protocols of the legislative process indicates that the legislators viewed a situation in which Jews would be able to return vacant properties, while in cases where the properties were occupied, they would receive financial compensation. The legislators took into account the personal connection of a person to his property, but in practice, the law is being used by settlers who have nothing to do with the original owners. In the end, a mechanism was created by the government and the Custodian General to exploit the law in order to take control of Palestinian populated areas and to transfer them exclusively to settlers. This is a governmental action, and the attempt to present it as a personal conflict of property restitution is nothing more than feigning innocence. The individual right that the law sought to protect was made by the settlers and with the assistance of the government for the right of one collective (Jewish) at the expense of another collective (Palestinian).

In addition, it turns out that in December 2005, the Custodian sold to the representatives of the Jewish trust four additional plots that were owned by other Jews in Batan Al-Hawa, without a tender and at a suspiciously low price. If the Custodian was indeed interested in selling the assets in good faith, he would have had to make a tender and offer the Palestinian residents of these properties the chance to purchase them. But instead, the Custodian quietly transferred four plots on which dozens or even hundreds of Palestinians live in the Batan Al-Hawah neighborhood to settlers who seek to evict the Palestinian residents and settle Jews there.

Granting Control of Jewish Trusts to Settlers – Through the years, settlers have been able to take control of many Jewish trusts from before 1948. This includes taking control over many properties in the Old City, and all the pending claims now against families in Batan Al-Hawa are settler claims in the name of a Jewish trust (The Benvenisti Trust) from the end of the 19th century, which was dedicated to provide residential units for poor Yemenite Jewish families. Many decades after the trust was abandoned, the Ateret Cohanim settler association appealed to the court and offered to administer the trust. The state supported the idea, although the interest represented by the settlers had nothing to do with the original purpose of the trust which was aiding the poor of Jerusalem in those days. Despite this, the court granted them control over the trust.

Police Assistance – The Israeli police are assisting settlers in many areas. In the past, there were cases where the police refused to help evacuate Palestinian families for security reasons. Today we see close cooperation with the settlers. Thus, for example, in October 2015, during a time of severe violence in Jerusalem when the police were very busy, police officers helped evict the Abu Nab family which involved imposing a curfew on the Batan Al-Hawa neighborhood.

Nir Hasson of Haaretz newspaper revealed that the police had also accompanied the settlers in threatening calls on tenants in an attempt to get them to leave the homes.

Mazen Duweik near his house in Batan Al-Hawa