A year and a half ago the Ministry of Housing and Construction published planning tenders for 20,000 housing units in the settlements, among which a tender for planning 800 housing units in A-Nahla (Givat Eitam), located north-east of the settlement of Efrat. After the revelation of the tenders and following public criticism, Prime Minister Netanyahu ordered to cancel the tenders. Nevertheless, in a response submitted to court last week, the state exposes that the Civil Administration allocated approximately 300 dunams, owned by the JNF subsidiary Himanuta, to the Efrat Municipality for planning.

The plan in A-Nahla is considered to be a significant obstacle to the two states solution, and has received massive international criticism. The plan has been referred to as “E2” to emphasize its harsh consequences on the two state solution. 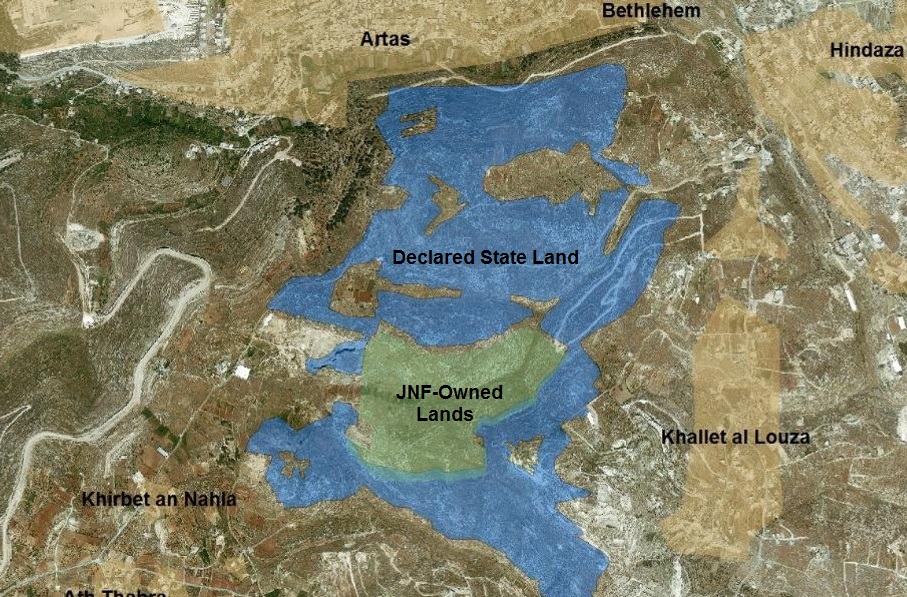 On Wednesday, July 8th 2015, the State submitted a response to a of Palestinian owners against the deceleration of 1,300 dunams of their lands in A-Nahla as state lands. In its response, the State indicates that: “the only contractual communication in Givat Eitam is the planning authorization given to the Efrat Municipal Council regarding the land registered to Himanuta”, thus exposing continued planning in the area despite the Prime Minister’s orders to cancel the tenders in 2013.

One of the petitioners’ arguments in this case was that the declaration of state lands was made in advance in order to establish a settlement and thus it should be invalidated. The petitioners’ also argued that the Ministry of Housing has already hired planners to prepare a construction plan for Givat Eitam. In response to this, the State argued that the planners were hired to plan near Givat Eitam, and added that the land allocated for planning in Givat Eitam is not a part of the area which was declared as state land but an area belonging to Himanuta, the JNF’s subsidiary.

Six month ago, the High Court rejected most of the petitioners’ pleas in the case mentioned above and decided to only discuss the question of the partial cultivation of some of the parcels declared as state land. The petitioners submitted a map of the parcels which they believe should be re-discussed and the State now requested that the court will reject this petition because the map was too general and in-fact included all of A-Nahla’s declared lands which is, according to the state, far from the original intention of the court’s interim decision. In the coming days the high court will decide on the future of this petition. If rejected, the state will be able to allocate the lands to the planning and construction of a new settlement.