It has been reported that the Attorney General (AG) Mendelblit has approved the legal opinion that allows the declaration of about 60 dunams near the village of Beita as “state lands”. The approval comes after the Civil Administration conducted a land survey and determined that the land could be declared as “state land” and be allocated to a settlement. The decision whether to proceed with the procedure is now in the hands of the government: The Minister of Defense must approve the declaration before it can happen. Now is the time to stop the settlement before the proceedings begin.

Peace Now: Instead of stopping the ideological delinquency of a handful of settlers who allow themselves to establish facts on the ground against the law, and contrary to the Israeli interest, the government seeks to encourage them and give them a reward. The establishment of a new settlement in the depths of the West Bank is a security burden, and a threat to the chances for peace. Coalition members who oppose the occupation and support two states must demand that the Defense Minister stop the madness and not approve the settlement in Eviatar. 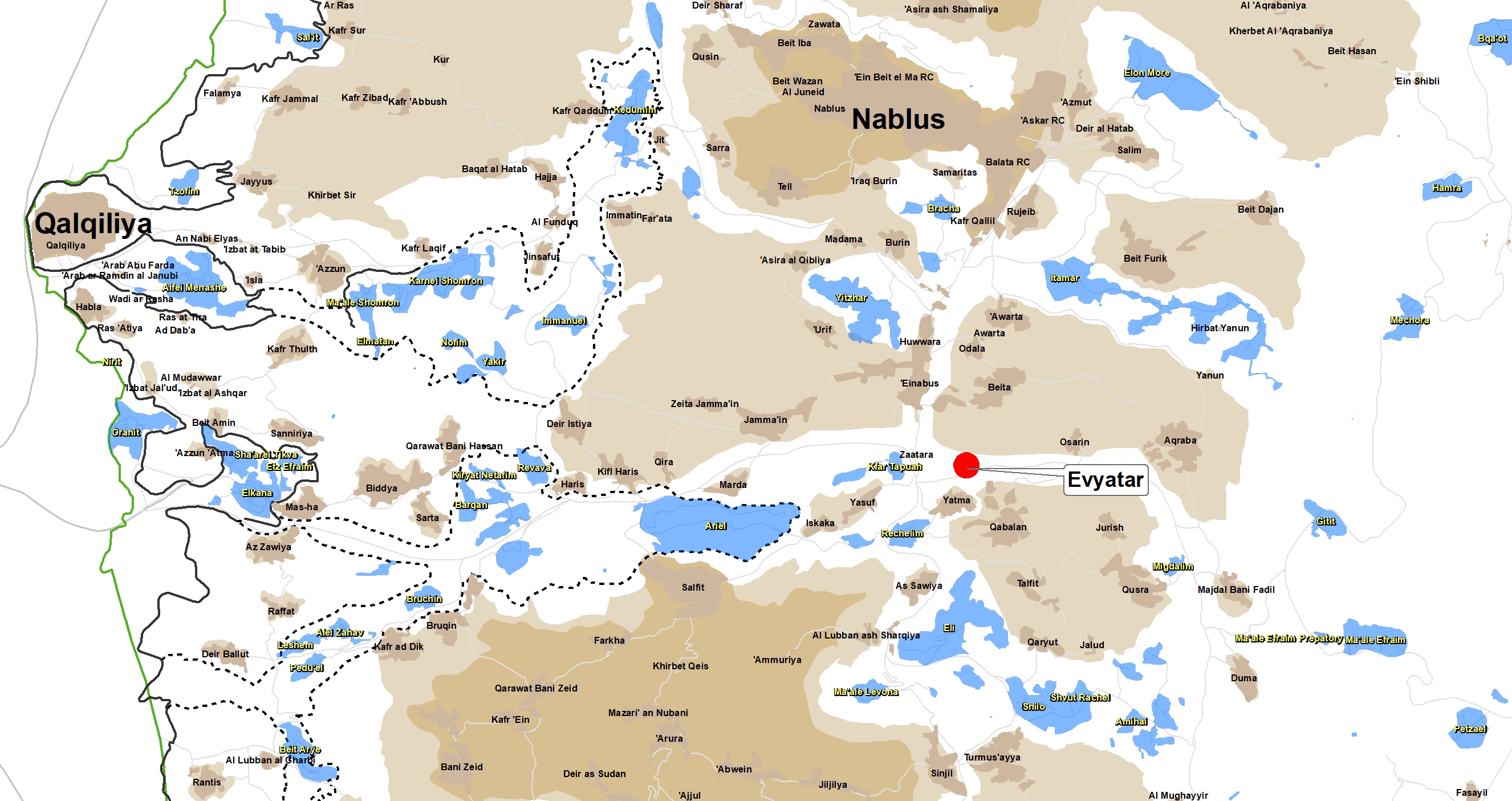 During the last week of May, settlers set up a new illegal outpost at Jabal Sabeih near the village of Beita, and presented a fact on the ground to the new government that was set up in early June. Defense Minister Gantz reached a “compromise” with the settlers, according to which they will agree to evacuate the outpost, and an IDF force will be stationed in the area to guard the structures they erected, that will remain on the ground until the status of the land is checked. Since then, the residents of the village of Beita, on whose land the outpost was established, have launched daily protests against the outpost now manned by IDF soldiers. In these protests, 9 Palestinians have been killed by IDF fire so far.

However, according to reports, the defense minister intends to establish the settlement immediately after the declaration, even before the appeals are heard. It is hard to legally justify such an act, maybe with the excuse that the structures are temporary and that in case the appeals are accepted the settlement will be evacuated. Anyway, this is another legal acrobatics that is added to the entire problematic outline. It should also be noted that the structures in Eviatar are already standing on the ground after being built illegally, they were not demolished, as was agreed with the settlers. These structures are not really temporary structures. The truth is that the next approval of the Minister of Defense, the approval to use a special military order for the purpose of establishing the educational institution without the due planning process, is also based on the assumption that these are temporary structures. Apparently, on the way to allowing the settlers what they want, the government has no problem bending the rules (which are already stretched out anyway).

The Process of State Land Declaration

The declaration of state lands is a procedure that was used by Israel since the 1980’s in order to take over nearly one million dunams in the occupied territories. The declaration is based on a draconian Israeli interpretation of the Ottoman Land Law according to which if land is not cultivated for a certain period it becomes public land and is managed by the state (and in the case of Israeli occupation of the territories, it is managed by the Civil Administration).

1. Land Survey – the professional bodies (“the blue line team”) within the Civil Administration conducts a survey examining the lands, aerial photos, land registrations etc. to determine whether the land can be considered as state land. Their conclusion should be approved by the Attorney General.

3. Publication of the declaration – After the approval of the Minister of Defense, the Custodian of Government Property in the Civil Administration, publishes a notice declaring that the land is state land, and gives those who wish to appeal it 45 days to file an appeal.

4. Appeal – Those who oppose the declaration and claim ownership of the land may file an appeal against the declaration before the Military Appeals Committee. The Appeals Committee consists of three judges-officers, who examine the appeal in a legal proceeding, hear witnesses and make a decision. The appeal procedure usually takes two to three years and sometimes longer, but if the committee works hard and fast it can theoretically be completed within a few months.

Construction before the final legal approval – settlers are already arguing that the new settlement should be established immediately upon the declaration without waiting years for the appeals to be heard. It is possible that the government will accept this argument and allow the immediate establishment of the settlement and claim that if in the end the court will cancel the declaration – the settlement will be evicted.

The planning procedure for establishing settlements is a procedure that usually takes several years. To circumvent it, the proposed outline is to establish a Yeshiva (an educational institute for Jewish studies) in Eviatar through a military order that allows educational institutions to be established even without a full planning procedure (Regulations of approval, establishment and licensing exemption for a temporary education structure, 2010). It is important to emphasize that a Yeshiva is in fact a settlement: it has a regular presence of several dozen students and staff and their families who live in the place. Simultaneously with the establishment of the Yeshiva, it will be possible to begin the planning process and after several years turn the settlement into a large settlement.

Read more about the outpost of Eviatar here.