The tenders published are: Beit El – 346 units; Adam – 96 units; Ariel – 731 units; Karnei Shomron – 22 units; Emanuel – 57 units; Elkana 102 units; Beitar Illit – one housing unit. 92% of the housing units in the tenders published today are in settlements deep in the West Bank that Israel will have to evacuate under a permanent agreement (according to the Geneva Initiative model).

Peace Now: Unfortunately, there is no longer any doubt that this government is not a government of change but rather a government of annexation. The commitment to a political status quo in settlements turned out to be a lip service on the way to continuing Netanyahu’s annexation policy. It is unfortunate to see how while the right is celebrating another step towards the total prevention of a Palestinian state, supporters of the two states within the government are silent. Labor and Meretz must wake up and demand an immediate halt to the construction rampage in the settlements that harms the prospect of a future political solution. 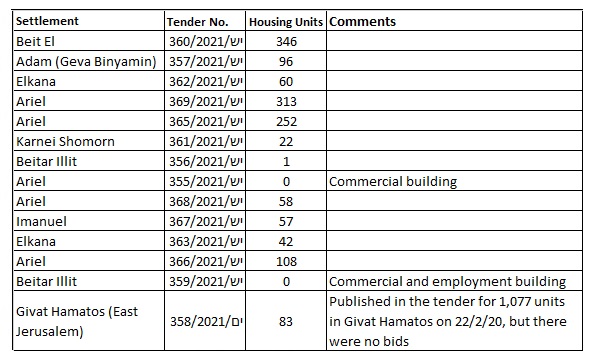 There are three main (non-exclusive) parameters that examine Israel’s policy in the settlements:

Promotion of plans – plans that are approved by the planning institutions of the Civil Administration for construction in the settlements. Each stage of the planning process (approval of the deposit, publication of the deposit, approval of validation and publication of the validation) requires the explicit approval of the Minister of Defense. In this way the government has full control over the promotion of the plans and it can avoid it. In recent years, there has been a significant increase in planning, and in 2020, plans were advanced for 12,159 housing units. Since the formation of the new government on 13/6/21, no plans have been approved in the settlements, but this coming Wednesday about 3,000 housing units are expected to be approved. In addition, under the current government, the objections to the plan in E1 were discussed.

Tenders – Tenders are the housing units that the Ministry of Housing markets for construction. In most settlements, after a plan is approved, construction will depend on the private initiative of the settlement and the settlers (with the assistance and encouragement of the government). However in 13 settlements, mainly urban and large settlements, where construction is managed by the Ministry of Housing, there must be tenders for the selection of contractors before the construction may start. This is a direct initiative of the government that initiates and manages the construction. The government can avoid construction or even stop it after the winning bids were selected. In January this year, tenders were published for 2,112 housing units in the settlements; together with the 1355 units published today the number of tenders in 2021 (3,467 units) is the second after the record number of the tenders in 2018 (see graph below).

It is important to note that Israel’s policy in the settlements is not only measured in quantitative indices (how many built or approved each year), but also in the location and nature of construction, the establishment of new settlements, paving roads and infrastructure, land expropriation, land allocation, lack of permits for Palestinians and house demolitions, construction of illegal outposts. Land takeover, legal changes and more.

For more information on the planning process in the settlements, see here.

The data for the years before 2005, include construction starts of housing units in settlements in the Gaza Strip.