Right wing political members of Knesset are pushing through the parliament a bill banning anyone from boycotting products made in the settlements for ideological reasons.

Peace Now opposes strongly this law and is raising the issue in the public eye –it is important to understand that this struggle is not against the settlers.
It is a struggle against the continuing wave of anti – democratic legislation, whose purpose is to limit the very right of legitimate public nonviolent protests.

It is ironic that when Israel is being swept up by a consumer boycott of food products (cottage cheese) which is welcomed as a positive civil action, while at the same time the MK’s are using the Knesset to ban such boycotts – but only when based on left-wing ideology!

It doesn’t matter if you agree with a boycott or not, Israeli citizens must have the democratic right to boycott what they want – and not live in fear of the legal authorities should they organize a protest based on their ideology.

It is not a matter of right and left, but a struggle against this shameful law and lawmakers ransacking our democracy of content! 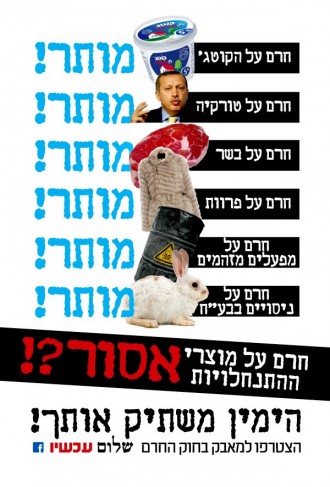 The Right is Silencing You! Join the Battle Against the Boycott Law – Facebook.