*** Update from April 1, 2022: The settlers left the place one week after the establishment and now there is no outpost there. ***

Last week a group of settlers established a new agricultural outpost, around 400 meters from the houses of the Palestinian village of Battir, west of Bethlehem. The outpost is located at the heart of an area that was declared in 2014 by UNESCO as a World Heritage site in Danger.

The location of the outpost is part of the settlers’ attempt to create a corridor of Israeli presence between the city of Bethlehem and the Palestinian villages west of it, including Hussan and Battir, and to undermine the territorial continuity of a future Palestinian state (See map). During the last two and a half years, two more outposts have been established in this same area: the Makhrour outpost, the Eden Farm outpost. On October 2020, a plan to double the Har Gilo settlement was promoted (‘Givat HaGamal’).

It should be noted that the land on which the outpost was established was declared “state land” back in the 80s. Still, its borders did not undergo the required delineation of the Blue Line team, which is responsible for examining the old delineations before someone makes use of the land. Battir residents argue that they are the legitimate owners of the land and that they have a Turkish Kushan-land ownership document.

Peace Now: “It is no coincidence that this illegal outpost is established while most of the public’s attention is drawn towards the war in Ukraine. The current government has already failed several times in stopping a handful of settlers in Eviatar, Homesh, and other places and has refrained from evicting illegal outposts immediately upon their establishment. The government must not fail this time, so the outpost will not be established.” 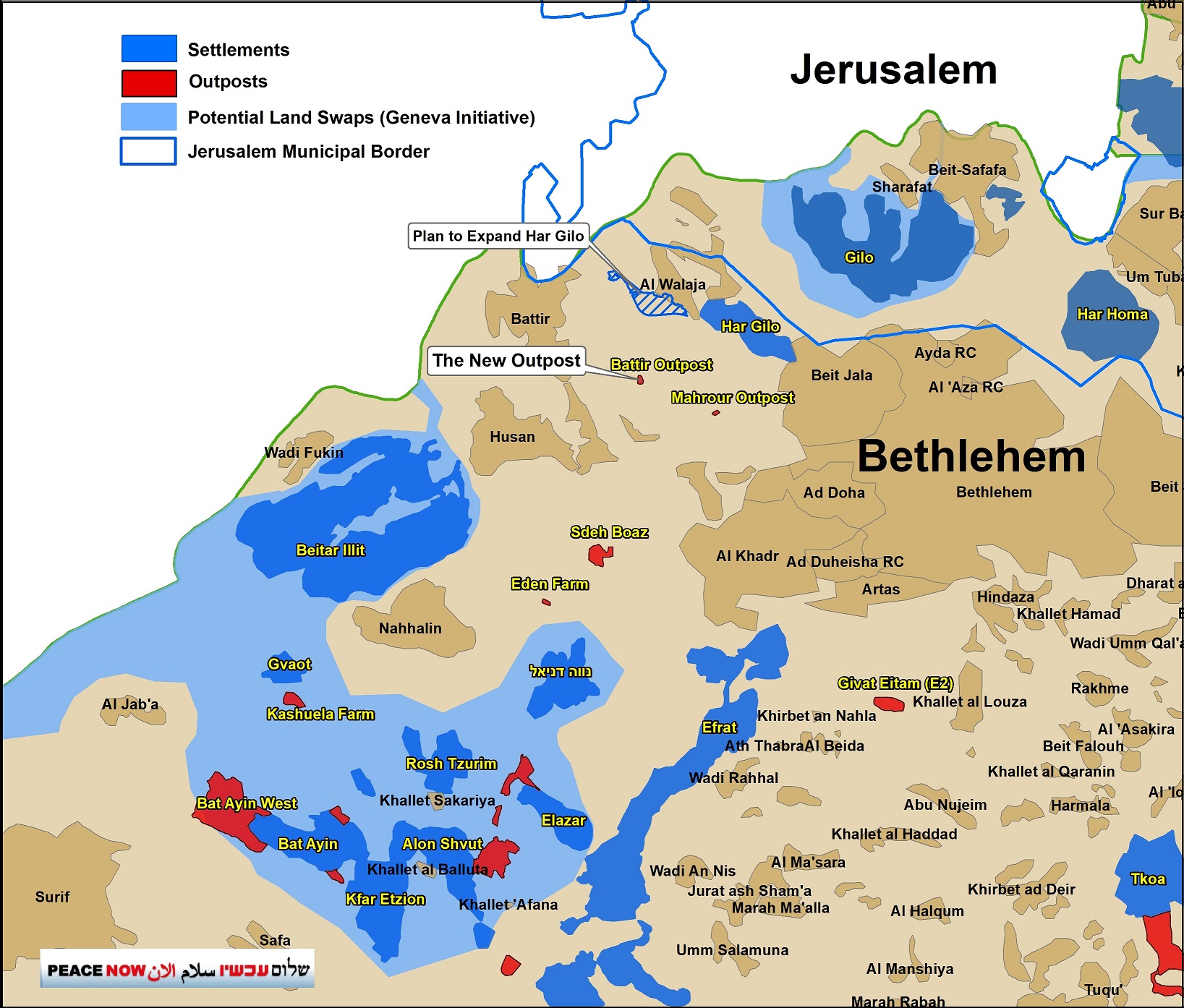 In 2014 UNESCO declared an area of c. 2,756 acres (11,135 dunams) as a World Heritage in Danger site. The site is called “Land of Olives and Vines – Cultural Landscape of Southern Jerusalem, Battir” and it is unique in its traditional farming, ancient terrace and irrigation channels.

It is described by UNESCO as follows:

“Palestine: Land of Olives and Vines – Cultural Landscape of Southern Jerusalem, Battir.
This site is located a few kilometres south-west of Jerusalem, in the Central Highlands between Nablus and Hebron. The Battir hill landscape comprises a series of farmed valleys, known as widian, with characteristic stone terraces, some of which are irrigated for market garden production, while others are dry and planted with grapevines and olive trees. The development of terrace farming in such a mountainous region is supported by a network of irrigation channels fed by underground sources. A traditional system of distribution is then used to share the water collected through this network between families from the nearby village of Battir.”

The new outpost, like the Makhrour Outpost that was established in 2019 one kilometer from it, are both at the core area of the World Heritage Site. 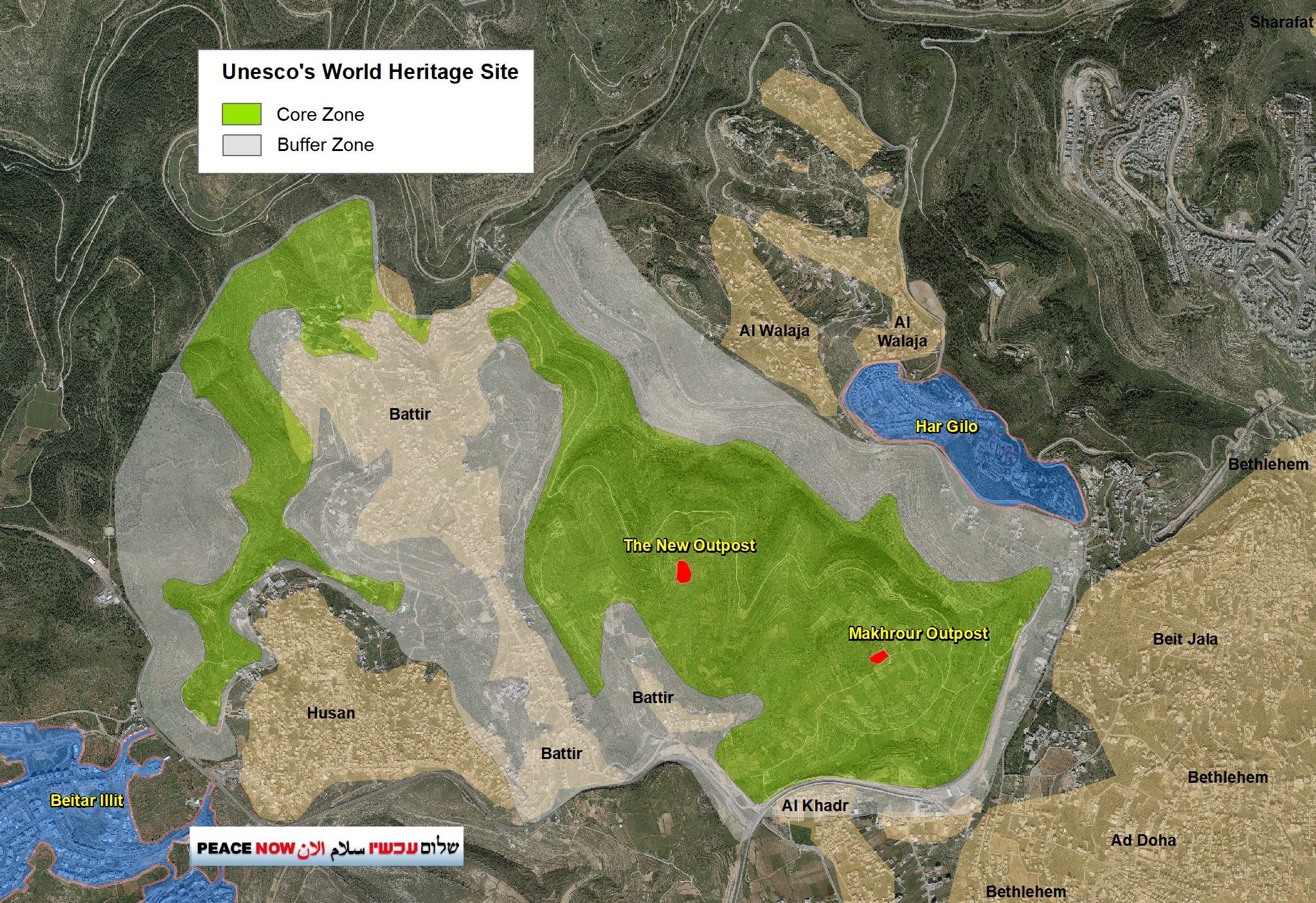 Three years ago, settlers tried to establish an outpost in this same place. In December 2018, an illegal road was paved to the hill, and on the night between 23 and 24 December, dozens of settlers arrived in the area and built a structure overnight. The next morning, they were evicted by the IDF. This week, the settlers returned to the site,  upgraded the illegal road they opened, build a sheep’s pen and brought an old truck for housing.

It is important to note that in September 2019, another illegal agricultural outpost, the Makhrour outpost, was founded nearby, with the involvement and support of the Gush Etzion Regional Council and Amana movement.

The settlers built a sheep’s pen, brought an old truck for housing and widened the illegal road that was paved to the outpost a few years ago.

In recent years about 50 agricultural outposts were founded in the Occupied Territories, and they control tens of thousands of acres. Thus, with a relatively small investment (one family and a few youngsters who herd sheep or cows upon a hill), settlers are able to take over huge amounts of land and dispossess Palestinian farmers from that same land. For some agricultural outposts, violence is a core practice for taking over the land.

In February 2021, the director of Amana, the organization behind many of the illegal outposts, Zeev Hever, stated at a conference on the subject of agricultural outposts, (or “Shepherds’ farm”) that:

“Nowadays, the settlements occupy from fifty to one hundred thousand dumans… Construction [of houses] occupies little space because its development is expensive, and therefore we have reached [only] one hundred thousand dunams after fifty years. During the last three years, the Shepherds’ farm took control over an area twice bigger than the already built settlements.”

For more information about the agricultural outposts, click here. 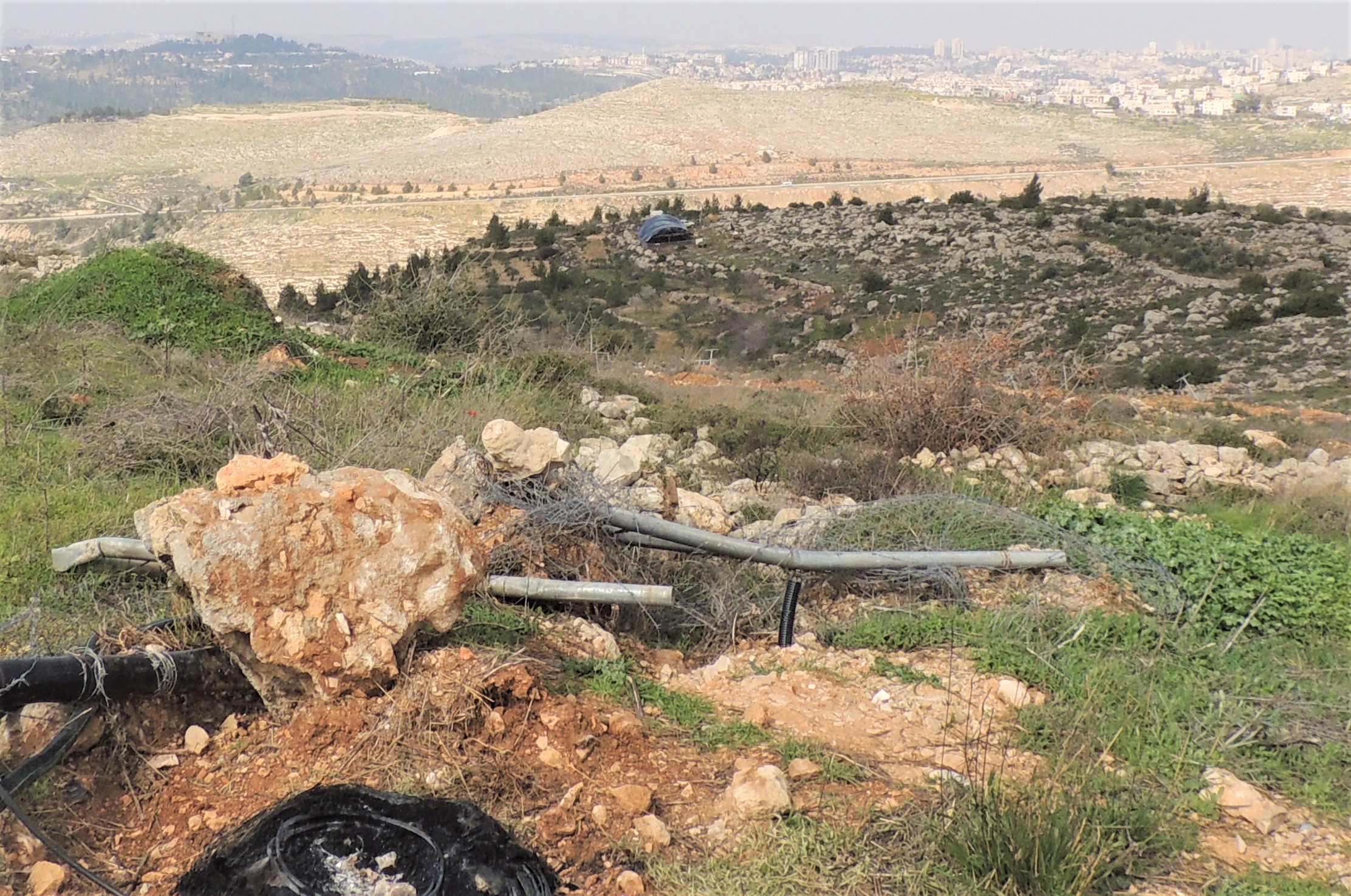 A fence established by Palestinians that was demolished by the Israeli authorities, with the new outpost in the background.