Elad, also known as the Ir David Foundation, is a settler organization engaged in settling Palestinain neighborhoods in East Jerusalem, developing tourism and archaeology, and “strengthening the Jewish connection to Jerusalem.” This association is one of the strongest and wealthiest in Israel (in 2018, its operating turnover was NIS 116 million and its assets were valued at NIS 372 million). The State of Israel has granted Elad the license to operate one of the most nationally and religiously valued and politically sensitive sites: the City of David archaeological site, which is located inside the Palestinian neighborhood of Silwan near the Temple Mount and the Al-Aqsa Mosque.

“We are a foundation whose goals are to house Jewish families in the City of David. These are the foundation’s stated objectives with the Registrar of Associations for which we receive donations. This is a main part of the foundation’s goals,” the association’s CEO and founder, David Be’eri, told the court in one of the lawsuits filed by Elad against a Palestinian resident of Silwan.

So how do settlers get to the heart of a Palestinian neighborhood?

In the beginning of the process, it was the government that helped Elad acquire properties. A governmental mechanism was established in the late 1980s dedicated to transferring properties in East Jerusalem from Palestinians into the hands of settlers. This mechanism was founded under the leadership of then Minister of Housing, Ariel Sharon. Dozens of properties were transferred to Elad and Ateret Cohanim organizations without auctions and in violation of the rules of proper administration. Millions of shekels were handed over to these organizations; the organizations then established companies (which they owned) that charged the state for “handling fees” and project management fees for the “services” provided to the organizations; and the organizations used the powers of the Custodian of Absentee Property as a tool to declare properties as absentee and claim possession of them.

When the Rabin government was formed in 1992, it set up a commission of inquiry, the Klugman Committee, to examine the governmental assistance provided to the settler associations in East Jerusalem. The committee’s report revealed very alarming findings about the conduct of government officials in transferring properties to the organizations. Following the Klugman Report, the activity of the governmental mechanism was halted and the direct line of assistance from the government to Elad was weakened. However, Elad was already equipped with dozens of properties which served as the basis of settlement development in Silwan and beyond. For more information on the Klugman Report, see here.

In Silwan, the Absentee Property Law was used to take control of Palestinian homes. The law, enacted in 1950, stipulates that a person who leaves Israel for an Arab country is considered “absent” and permits the state to take the person’s property. Elad, together with the Jewish National Fund (JNF, the Keren Kayemet Leyisrael KKL), began a process of declaring the properties in Silwan as absentees’ properties, which were then given to them by the Custodian of Absentee Property (through either JNF or Amidar, a state-owned housing company). The Palestinian families living in these houses found themselves facing eviction lawsuits and lengthy, expensive court proceedings in which they were required to prove that they were in fact not absent, but were the legal owners of the property. This was the fate of the Sumarin family, who over the course of 30 year have struggled to remain in their home while battling lawsuits filed against them by JNF on behalf of the Elad settlers.

For more information on the use of the Absentee Property Law, see the Peace Now report “Annex and Dispossess.”

There were also approximately 25 dunams purchased by Baron Rothschild in Silwan before 1948 that were given to the Jewish National Fund (KKL-JNF). The JNF gave this land (including the few Palestinian houses that were built on them) to Elad in the 1990s for tourism and residential purposes. 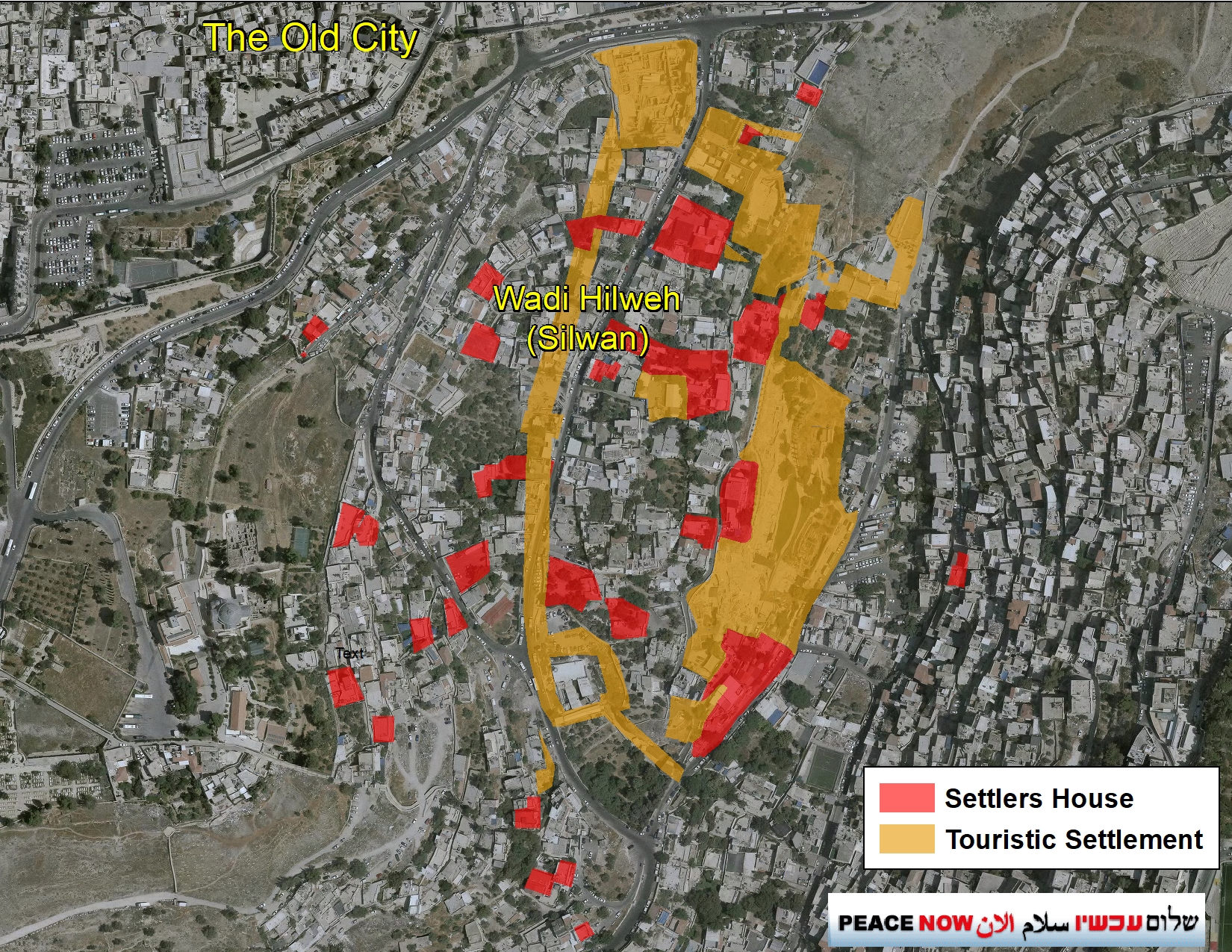 After the 90s, Elad’s main method of acquiring properties in the Palestinian neighborhood has been taking advantage of the hardships and poverty experienced by Palestinian families in order to close on deals with them. Convincing Palestinians to sell properties to Israelis in a place at the heart of the conflict requires manipulation, exploitation, pressure, and a great deal of money. All Elad needs is a signature of consent (sometimes from a person who does not even own the property in question), and the ball is in their court, exactly where they are most comfortable: the legal arena. And once Elad reaches the courtroom it is no longer a fair game: the strong and powerful oppose the weakened and disenfranchised.

Transactions are almost never made directly between Palestinian landowners and settlers. There are always Palestinian straw men who facilitate the process of paperwork and signatures. This creates opportunity for manipulation and forgery which Elad can claim to have no knowledge of, and can later sign on the dotted line with a supposedly clean conscience. Later in court, the Palestinian family will start at a disadvantage, having to prove that there was a forgery in the first place.

For example, some properties in Silwan have multiple owners, heirs of the original owner. Elad will seek out a weak link among them- someone who lives abroad and has a smaller connection to the national struggle, someone in especially difficult circumstances, someone who struggles with addiction or has a criminal record, and so on. Elad will entice this person to sell their share of the property by offering a large sum of money. Then, Elad will file an eviction suit in court. Sometimes Elad claims that the person sold the entire property. If the family perseveres through the long, expensive legal battle and succeeds in proving that they did not sell the property, and Elad only bought part of it from one of the owners, Elad would file another lawsuit to split up the property and claim its share (and sometimes also make sure that the custodian of absentee property will join the case to take the part of the heirs who happen to live in Arab countries in order to later buy the custodian’s share). Throughout this process, the Palestinian family must hire lawyers, acquire experts, and spend hundreds of thousands of shekels in court over the course of several years in the attempt to fight against a foundation that is willing to do whatever it takes – from appealing decisions to making endless requests – to get what they want.

In order to increase the pressure to sell, Elad will also demand “usage fees” – hundreds of thousands of shekels charged for the family’s use of the property that Elad claims to have purchased. When the family, facing a loss in court, has exhausted their funds, Elad increases the pressure and makes tempting offers: “You’re going to lose anyway, you’ll have to pay tens of thousands of shekels in legal fees and hundreds of thousands more in usage fees- make a deal with us instead.” Read here about the experience of the Siyam family for an example of how this process plays out.

Legal aid organizations and the Palestinian Authority help some of the families, but they face a heavy burden and oftentimes, the help is not enough to withstand the relentlessness of Elad lawyers.

Private security at the expense of the state

The Ministry of Housing budget includes a section called “East Jerusalem Security” which is intended to fund private security companies for protecting settlers’ complexes in East Jerusalem Palestinian neighborhoods. In recent years, the yearly budget for East Jerusalem Security has been nearly NIS 100 million (this amount is equivalent to spending NIS 3,000 each month on every individual settler in these complexes). Elad benefits from part of this budget, enjoying security guards at the expense of the state. These guards man permanent stations in settlers’ houses and accompany children from their houses to transportation.

In addition to the security paid for by the state, Elad also hires security at its own expense that engage in different security activities, including monitoring Palestinian residents. For example, one of the residents of Silwan (who is also a community leader who helped residents stand up to the pressures of Elad) was accused of assault. During the trial, Elad security guards surveilled the resident and took pictures of his home in an attempt- which eventually failed- to show that he violated the conditions of his home arrest. 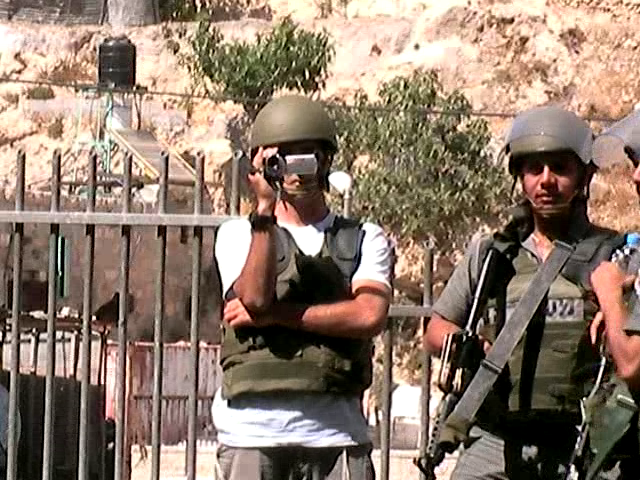 Tourism and archaeological activity by Elad

At the start, Elad focused on settlement, striving to bring as many settlers as possible to Silwan. This sparked controversy and public criticism, and Elad was considered an extremist fringe group. However, over the years Elad realized that the way to gain public and governmental support was through tourism and archaeology. Eventually, Elad became the director of archaeological excavations. Elad managed to raise large funds for its archaeological endeavors, and the Antiquities Authority became dependent on its grace and money. The CEO of Elad, David Be’eri, was recorded guiding a tour in Silwan and bragging about how he was able to outwit the Antiquities Authority, allowing him to expand excavations as he wished.

The excavations in Silwan received a great deal of professional criticism for their methods and lack of publicity, as well as for the intensity and tirelessness of the research. Even within the Antiquities Authority, some objected to the excavations, calling them “bad archaeology.” Cracks and damages have been discovered in many properties in the vicinity of the underground excavations being carried out by the Antiquities Authority under the management of Elad.

Tourism and archaeology have become central to Elad’s operations and they in fact constitute another type of settlement. In addition to the legitimacy that the tourism enterprise provides Elad, it also allows Elad to change the facts on the ground, making Silwan much more “Israeli.” Through tourism, Elad is able to bring hundreds of thousands of Israelis as visitors to Silwan and tell the story of the area as they see it. For more information about settlement tourism, see “Invisible Settlements in Jerusalem.”

It is important to note that an important and sensitive site like ancient Jerusalem in Silwan could be managed differently. It could be a place with enough space for the heritage of all people and all the relevant cultures, shared with the residents. But instead it is used as a political tool. For more on possible alternatives for managing archaeology and tourism in Jerusalem, see the work of Emek Shaveh.

In 2016, the Israeli State Comptroller sharply criticized the fact that important archaeological sites in Jerusalem were given to Elad without an auction and the fact that state authorities, including the Nature and Parks Authority and the Antiquities Authority, do not supervise Elad’s activities.

Not Just in Silwan

Elad has expanded its activities much further than Silwan. It has purchased homes in Jabel Mukaber and A-Tur and is involved in the construction of settler residences in Ras Al-Amud and in the a-Swaneh neighborhood. Its tourist activity extends from the Tzurim Valley through the Mount of Olives and the Kidron Valley to the Ben Hinnom Valley and the High Commissioner’s Palace (Armon HaNatziv) Ridge. In recent years, Elad has also become established in the Peace Forest, on the border of the Abu Tor and Jabel Mukaber neighborhoods.

The BBC recently revealed that one of the biggest contributors to the Elad Association is Roman Abramovich, owner of Chelsea Football Club, who has donated more than $100 million to Elad in 12 years.