Read the report here as a PDF

A. Highlights – Settlement Construction In The West Bank, 2019

11 New settlement outposts (illegal agriculture farms) were established in 2019, all of them in areas that Israel will need to evict under a two state solution (east of the Geneva Initiative proposed border)

Nearly 63% (1,200 housing units) of the new construction was in settlements east of the proposed Geneva Initiative border, i.e. settlements likely to be evacuated in a two-state agreement.

At least 10% (195 housing units) of the construction was illegal, in illegal outposts.

The vast majority of new construction, 91% (1,764 housing units), was for permanent structures, while that the remainder was mobile homes both in outposts and in settlements.

61 new public buildings (such as schools, synagogues etc.) started to be built, alongside 87 structures for industry or agriculture (53%! of them in illegal outposts).

Advancement of Plans and Tenders in 2019 (January-December)

8,457 Housing units were advanced through plans in 58 settlements. Almost 68% (5,783 housing units) of the planned units were east of the purposed Geneva Initiative border.

Tenders were published for 1,761 housing units, 956 of them in settlements and 805 units in East Jerusalem Israeli neighborhoods.

It should be noted that since January 2020 and before the election on March 2nd, the Israeli government managed to advance plans for 7,582 units (including 3,401 units in E1) and to publish tenders for 3,332 units (1,785 of them in settlements and 1,547 in East Jerusalem, including in Givat Hamatos).

Appendix: The construction in the settlements in the Jordan Valley 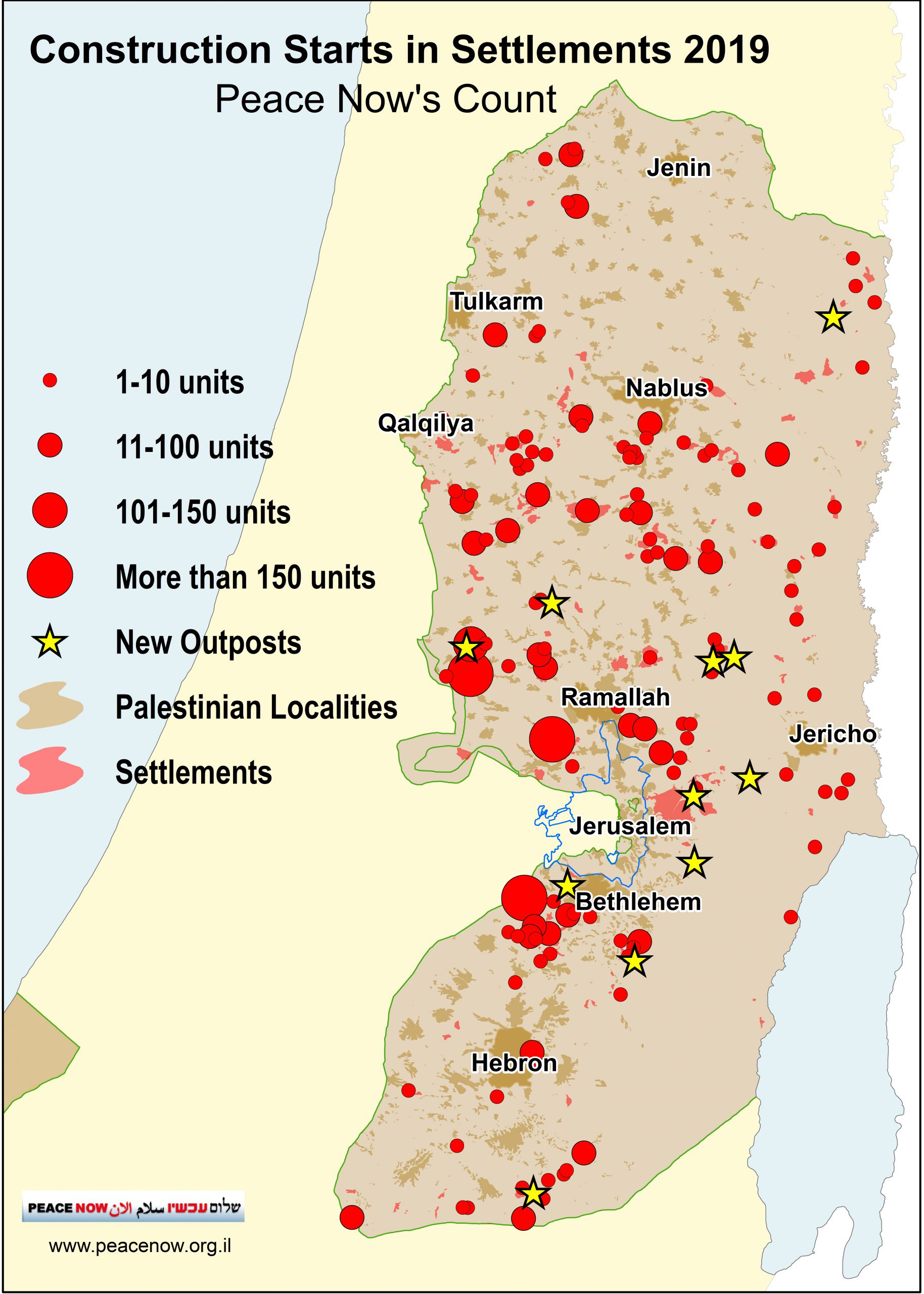 In 2019, 11 new outposts were established throughout the West Bank: two in the Bethlehem area; three east of Jerusalem in the vicinity of E1 and Khan Al-Ahmar, one in the southern Mount Hebron region; one in the northern Jordan Valley, four in the vicinity of Ramallah. In recent years, illegal outposts have again become a choice method, whereby settlers establish facts on the ground by building unauthorized settlements knowing fully well that the government will allow them to remain and to try to retroactively legalize them while tacitly encouraging their growth.

The 11 new outposts set up in 2019 are all styled as farms. The farms allow settlers to take over vast areas (pasture and agricultural cultivation) with only a small group of people—one family and several youngsters—who maintain the farm and take control of land. This control often involves them additionally driving off Palestinian farmers from the area. For more information on the return of the outpost phenomenon, see here. 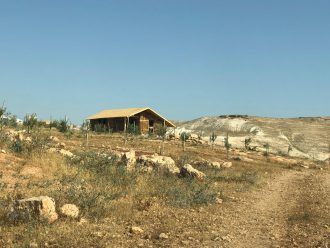 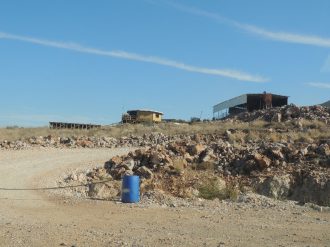 C. Most Of The Construction Is In Settlements That Israel Will Need To Evict

Peace Now’s Settlement Watch annual construction report for 2019 reveals that the construction was largely focused in isolated settlements and in areas that are highly problematic in terms of a two-state solution. 63% (1,200 housing units) of the new housing starts were in areas that are east of the proposed Geneva Initiative border. 1,200 units are the potential for another 5,000-6,000 settlers to move in those houses when completed, which means Israel will need to evict many more settlers in order to implement a two-state conflict-ending resolution.

The Geneva Initiative is a model of an Israeli-Palestinian permanent agreement that has been informally agreed upon by both Israelis and Palestinians of significant status in a variety of professions and is currently the only document for which there is agreement, albeit informal.

According to the model, Israel will be able to annex a minor amount of Palestinian land encompassing most settlers in return for exchanging to the Palestinian state land out of Israeli territory.

Consequently, the Israeli government is digging the pit where Israel is on track to fall. Every house built in the settlements and every family that moves to live there will cost Israel a painful and difficult evacuation. Even if one does not believe that peace can be reached in the near future, it makes no sense to build settlements and to make the conflict insoluble.

D. Settlements With The Most Construction

Nearly 40% of construction starts in 2019 were in four ultra-Orthodox settlements (741 housing units in Modi’in Illit, Beitar Illit, Givat Ze’ev’s Agan HaAyalot neighborhood, and Tel Zion in Kochav Ya’akov). The ultra-Orthodox, or Haredi, population has a high growth rate (many children in each family), leaving a lot of young couples each year in need of housing, and they prefer to live in separate, ultra-Orthodox neighborhoods, which the government designates and builds for them. Living beyond the Green Line for them is not generally the preference; they come to the settlements because the state builds suitable and cheap housing for them (for more on the ultra-Orthodox settlements, see here):

Only a small part of the construction in 2019, about 5%, was in secular or mixed urban settlements. Apart from Ariel, where 73 housing units were built, mixed or other secular settlements had little construction—11 housing units in Adam, 5 in Hinnanit, 6 in Naomi, etc.). This may indicate that in the end, national-religious motives for moving to the settlements still play a central role, and that the broader Israeli public, which does not see an ideological obligation to settle in the Occupied Territories, is not flocking to live in them. The exception is, as mentioned, the ultra-Orthodox public, which the state encourages through affordable housing in predominantly Haredi settlements. 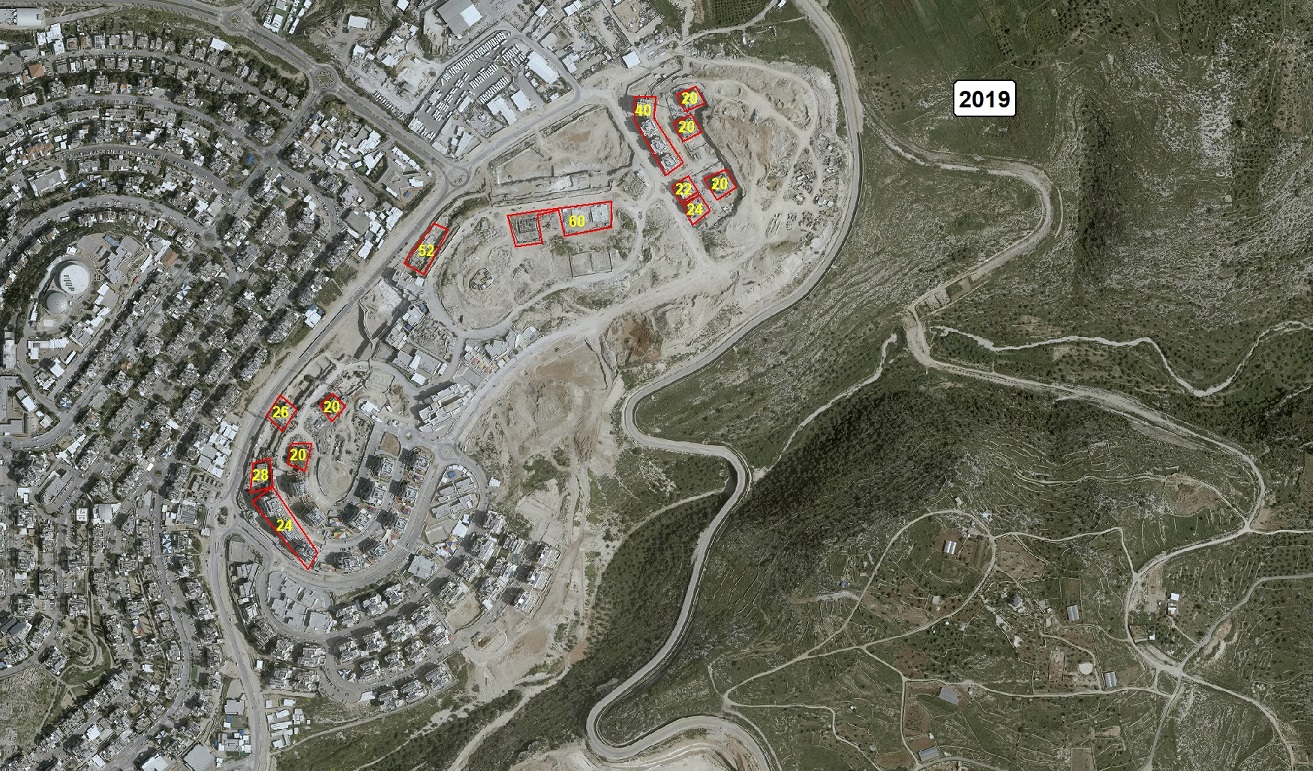 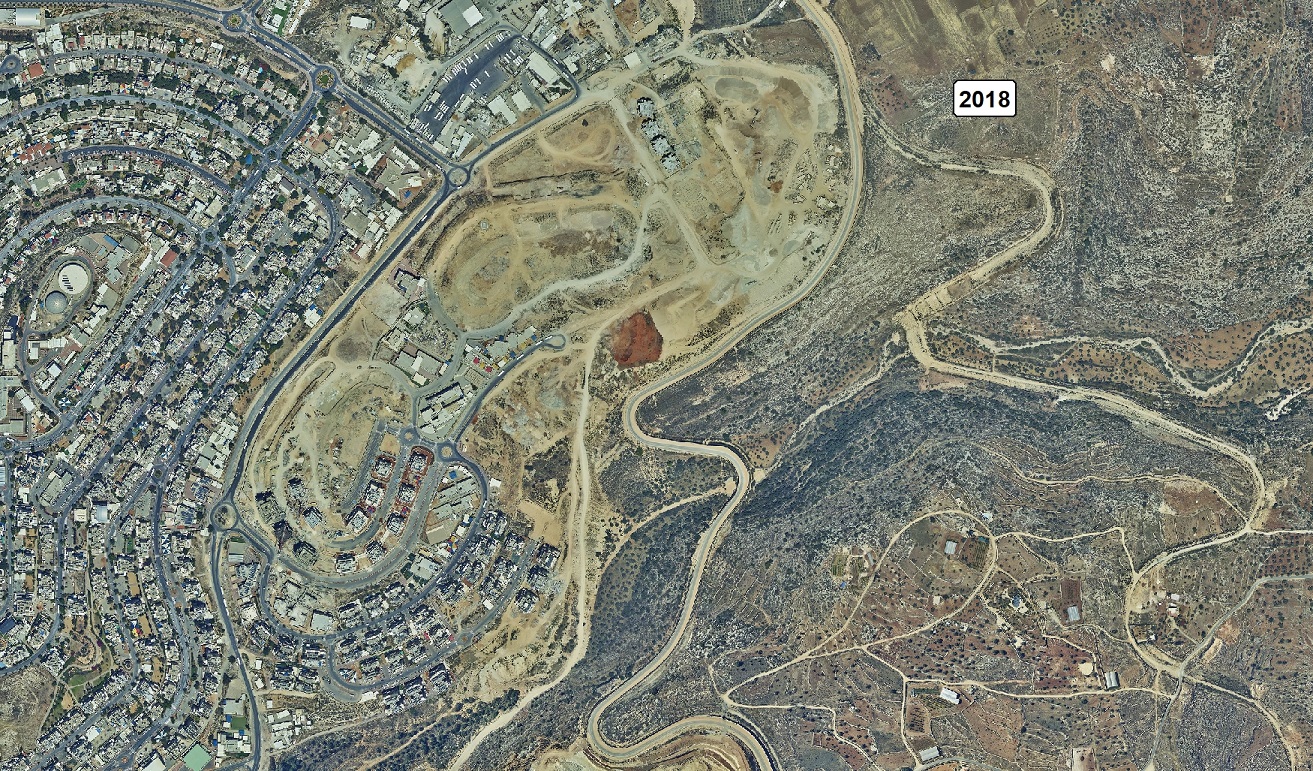 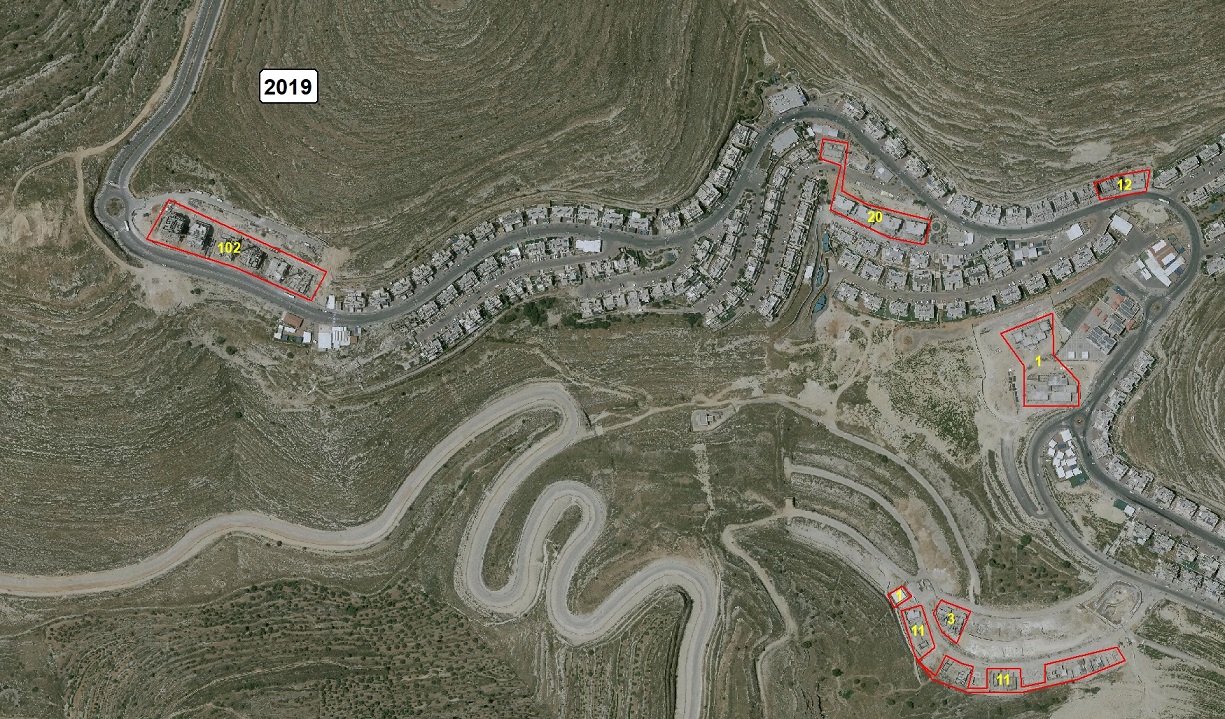 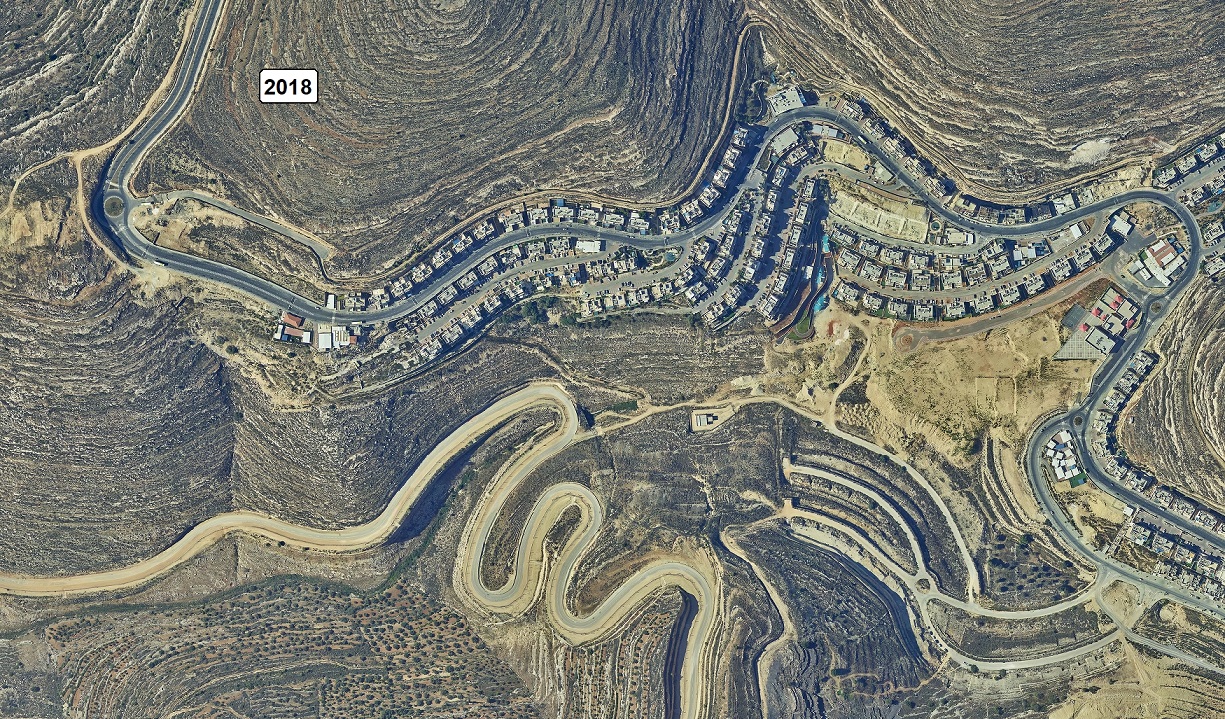 Bruchin settlement, established in the 1990s as an illegal outpost and retroactively authorized as a legal settlement by the government in 2012, has enjoyed tremendous construction momentum. No less than 94 new housing units have been built in 2019 (in addition to 77 housing units built in 2018), a very large amount for a small settlement. The area where Bruchin is located, in the Salfit region southeast of Qalqiliya, is very difficult for land swaps (Bruchin is 10 km from the Green Line), which would highly disrupt and in some places sever the territorial contiguity between Palestinian towns in the area. The settlements in the area have witnessed an explosion in settlement expansion in the last decade. For example, in addition to Bruchin, the settlement of Leshem was established in recent years, although formally it is defined as an extension of the settlement Alei Zahav. In 2019, 61 new housing units were built, after 180 were built in the previous two years. 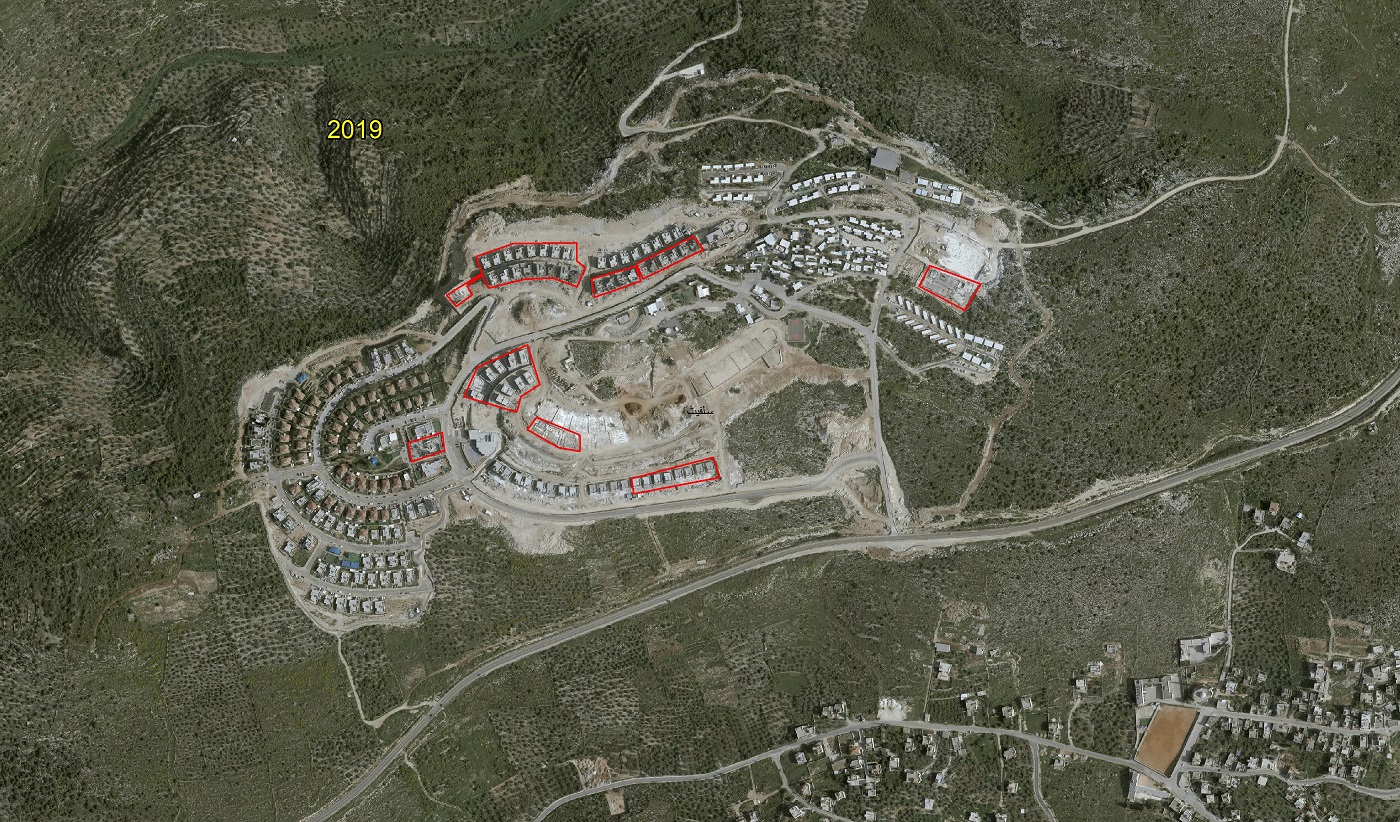 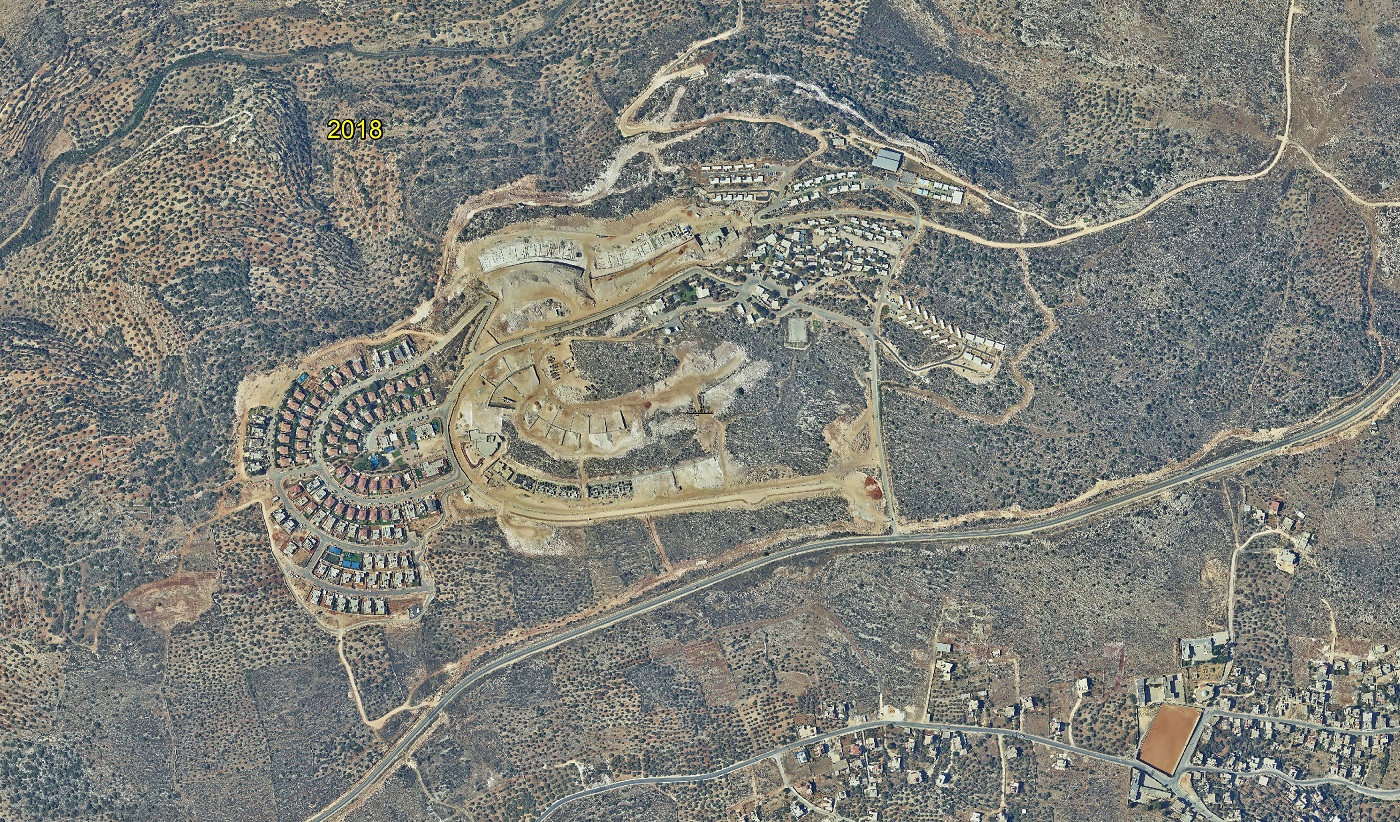 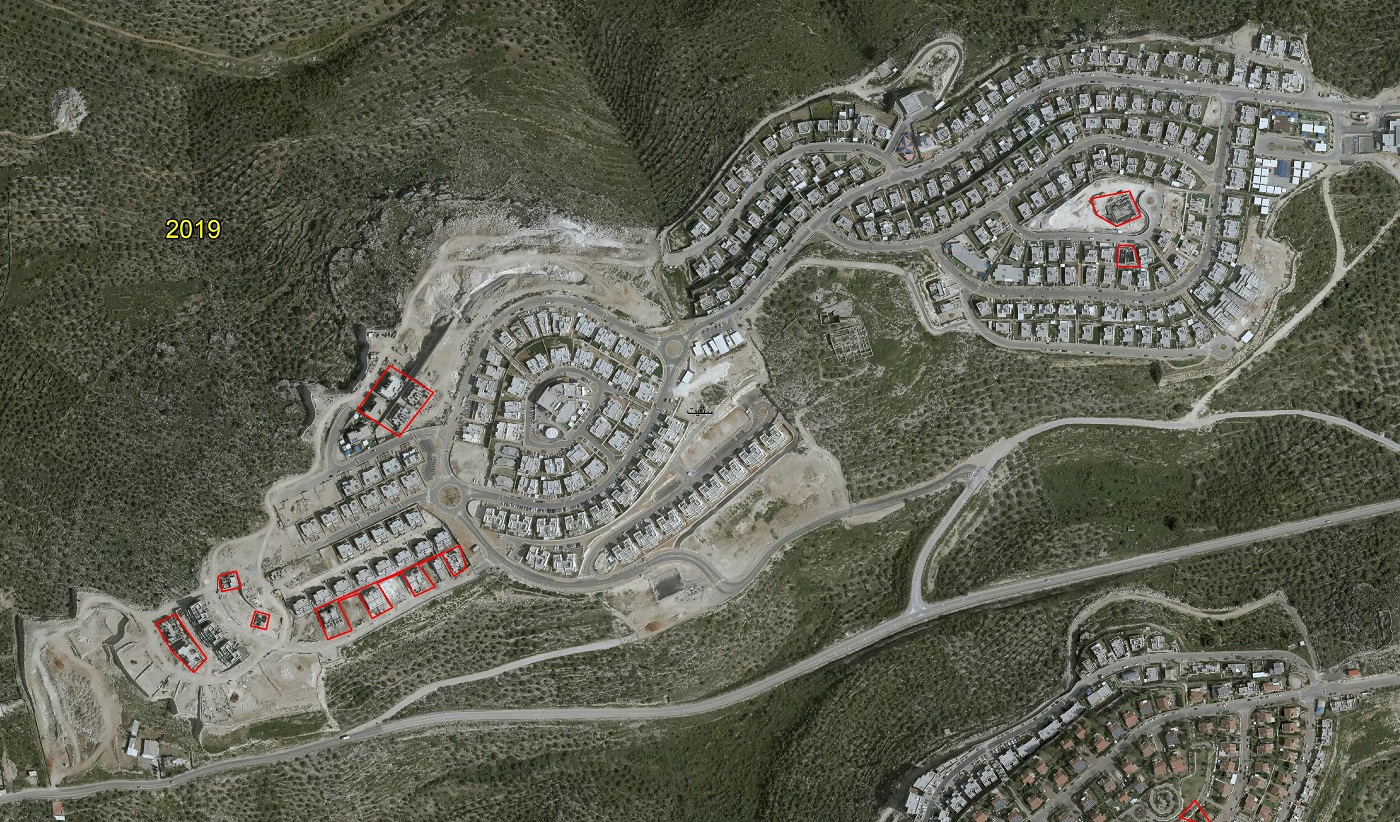 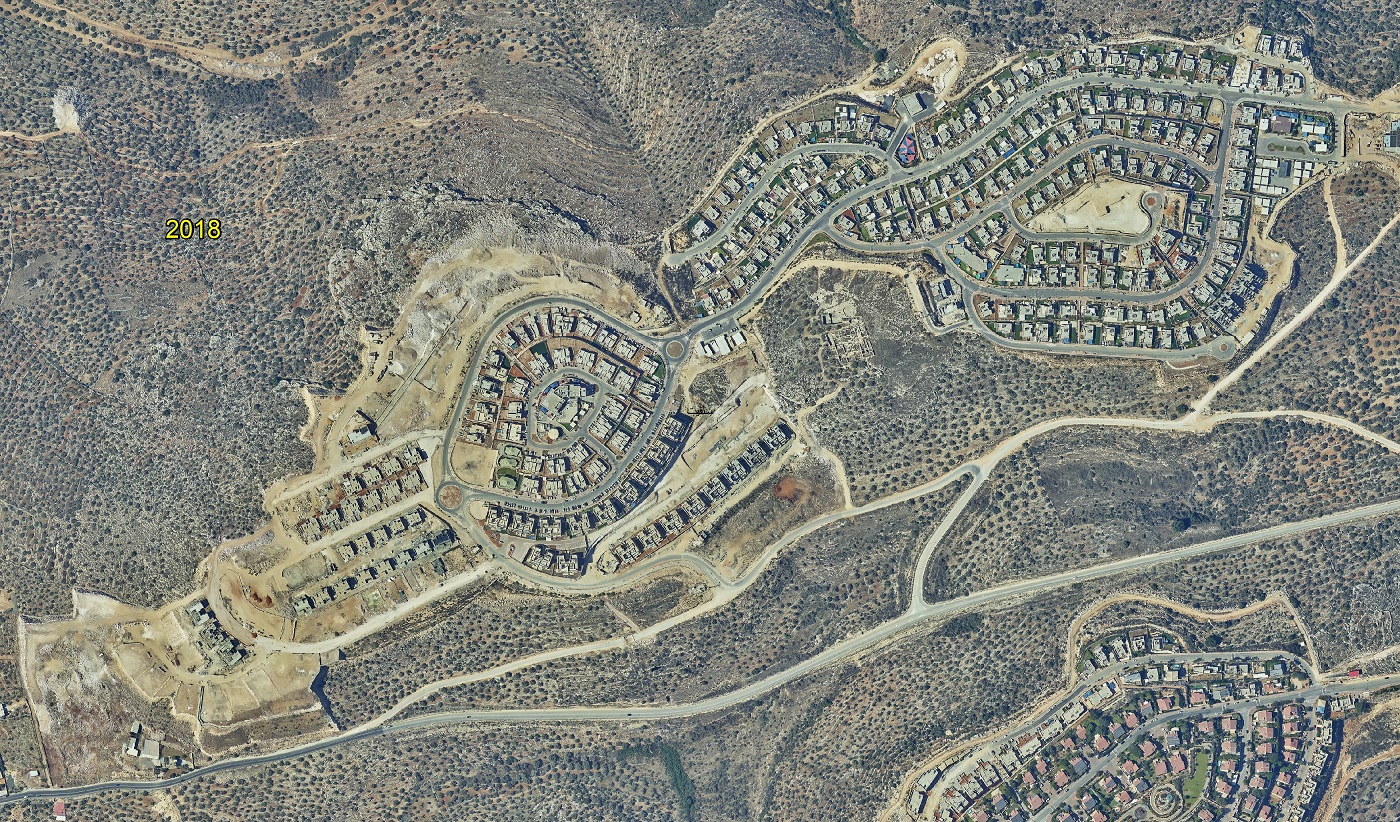 Nokdim and Kfar Eldad – In the Nokdim settlement, infrastructure work began on a new large neighborhood, as well as in a nearby settlement called Kfar Eldad, which formally is defined as part of Nokdim. This construction is part of a continuing trend of building and development in the Nokdim and Tekoa settlement area in the wake of the completion of the Za’atra bypass road (aka the “Lieberman Road”). The increased pace of construction continues to this day (for more see here). In addition, a helicopter landing pad was built for then-Defense Minister Avigdor Lieberman, who lives in the settlement. 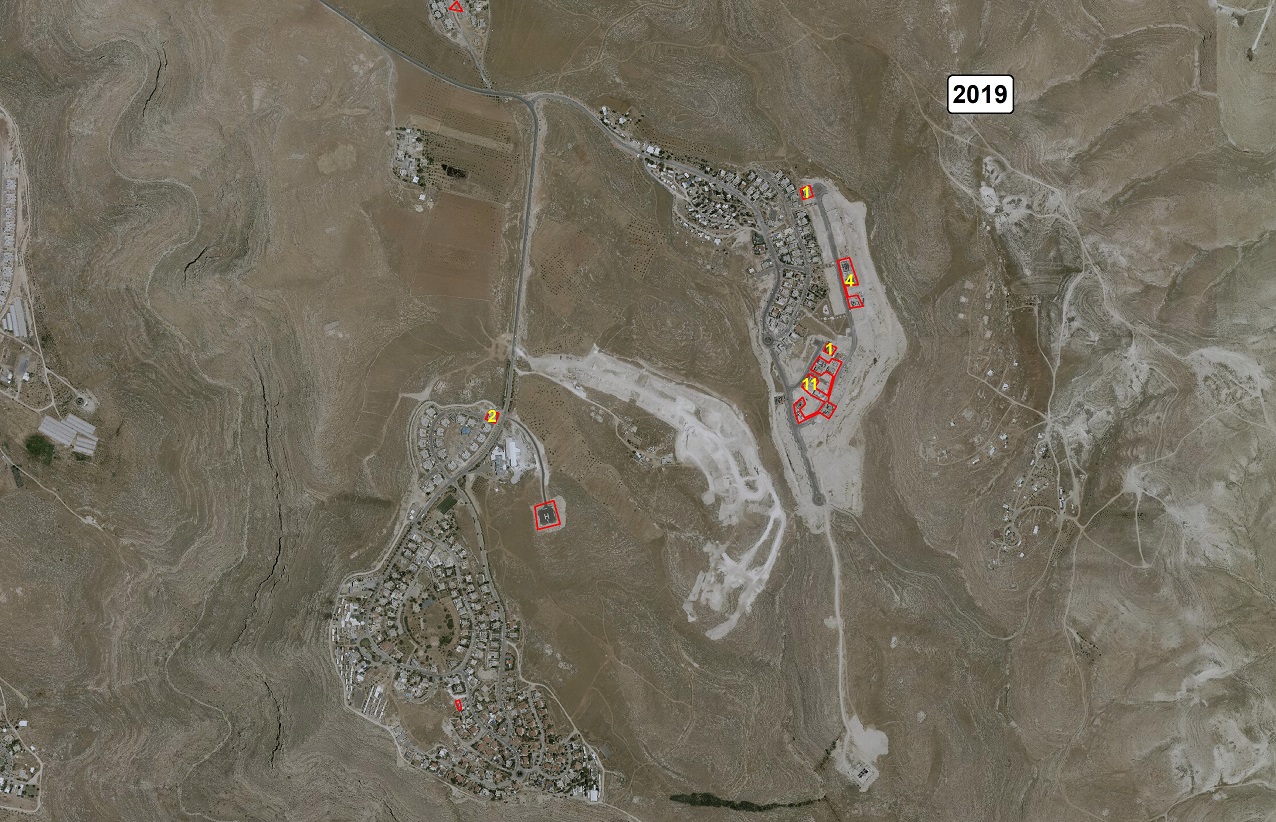 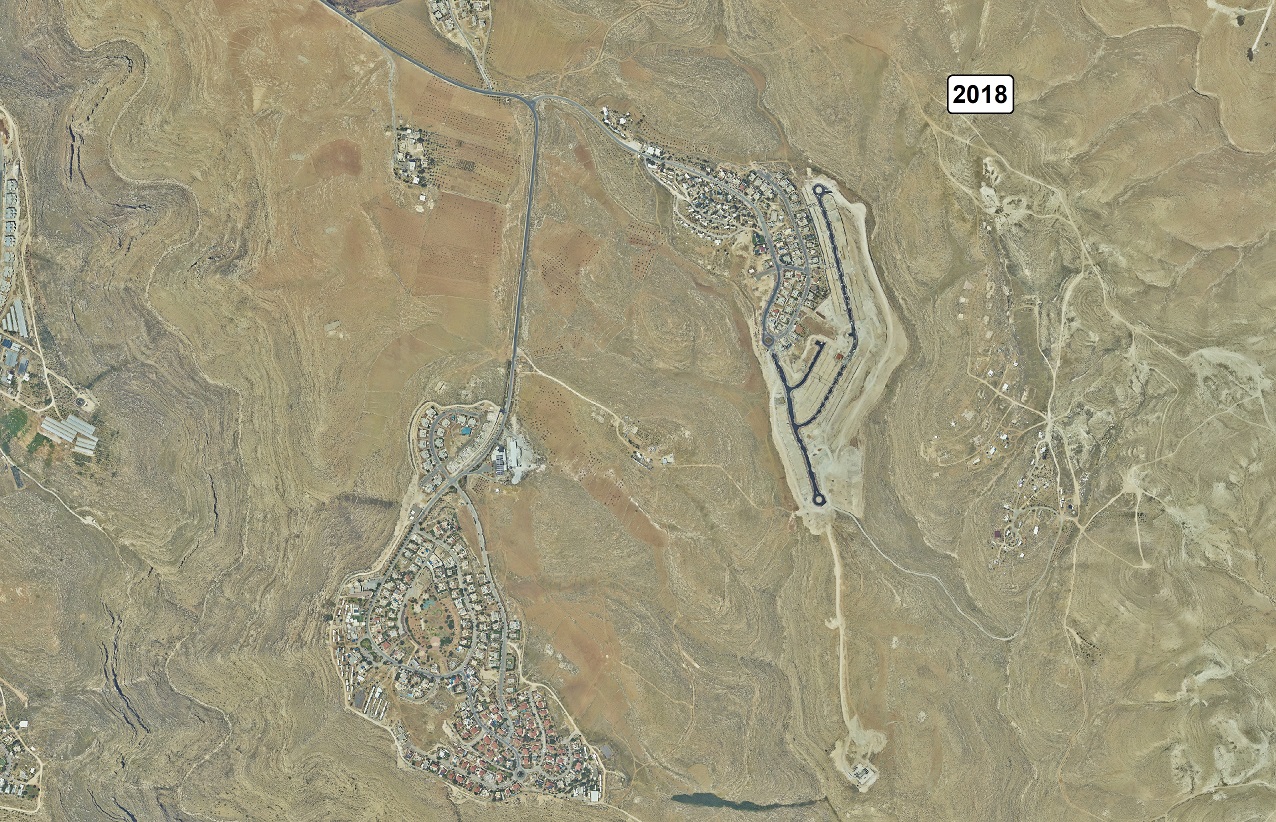 The following is an appendix to the 2019 yearly settlement construction report of Peace Now.

Despite the efforts of various governments, all failed to bring a massive amount of settlers to the Jordan Valley. Currently, only 12,788 settlers live in the Valley—about 3% of the settlers (interestingly, in the East Bank, Jordan, the Jordanian government managed to bring hundreds of thousands of residents to the area with the same climate and distances from Jordanian populated centers).

At the same time, the takeover of the Jordan Valley lands is almost complete. Since 1967, Israel has implemented a policy of dispossession of the Palestinians – an absolute majority of the land was seized for firing zones and training purposes, and hundreds of thousands of dunams were allocated to settlers for agricultural use. The Palestinians have limited areas where Israel allows them to build and live in small enclaves of about 5% of the Valley—in the Jericho area that is Area A, and in some small villages considered Area B. 95% of the Valley is considered to be Area C, under full Israeli control, and Israeli policy is not to permit any construction and development for the Palestinians.

Thus, the reality in the Jordan Valley is one whereby a small minority of residents (12,788 settlers) control 95% of the land, while the Palestinian majority (52,950 – 81% of the Valley’s population) are confined to small enclaves in the remaining 5% of the area.

2. Construction of the settlements in the Jordan Valley in 2019

In the past decade, an average of 103 housing units have been built in the Jordan Valley settlements, with most of the construction located in relatively large settlements on its western edge: in the Kochav HaShachar, Alon, and Mitzpe Yericho.

In 2019, there were 110 housing unit construction starts in the Valley’s settlements and outposts, slightly above average. It is possible to say that in the last three years there has been a relative increase in such construction starts, but it is still early to be determined as a trend.

Among other things, 10 new units were established in the Kedem Arava outpost, making it a large outpost with dozens of families. In Mul Nevo outpost, which consists of a single farm with one resident and several employees, about eight families were added in the last two years, and in the last two years five new caravans taken root (provided by Amana). 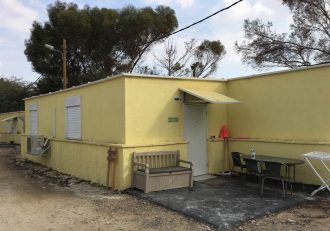 In 2012, the phenomenon of building new illegal outposts renewed, mainly as agricultural farms consisting of a limited number of settlers, allowing them to take control of large areas through grazing and removing Palestinian farmers from their land. (For more information on the return of the outpost phenomenon, see here. For more information on the mechanism behind illegal outpost building, see here.)

Of the 40 outposts established since 2012, 30% (12 outposts) were in the Jordan Valley. The takeover of vast areas, and the harassment and driving out of Palestinian farmers by settlers from these newly established outposts, is rampant throughout the area.

In 2019, four new outposts were established in the Jordan Valley: Mitzpeh HaTorah (farm for haredi yeshiva students, adjacent to Mitzpe Yericho settlement), Rimonim North and Mitzpe Kramim East—farms in the vicinity of Kochav Hashahar (note: these farms sometimes “migrate” from place to place); and Maskiyot South (agricultural farm south of Maskiyot settlement in the north of the Valley, west of Alon Road). 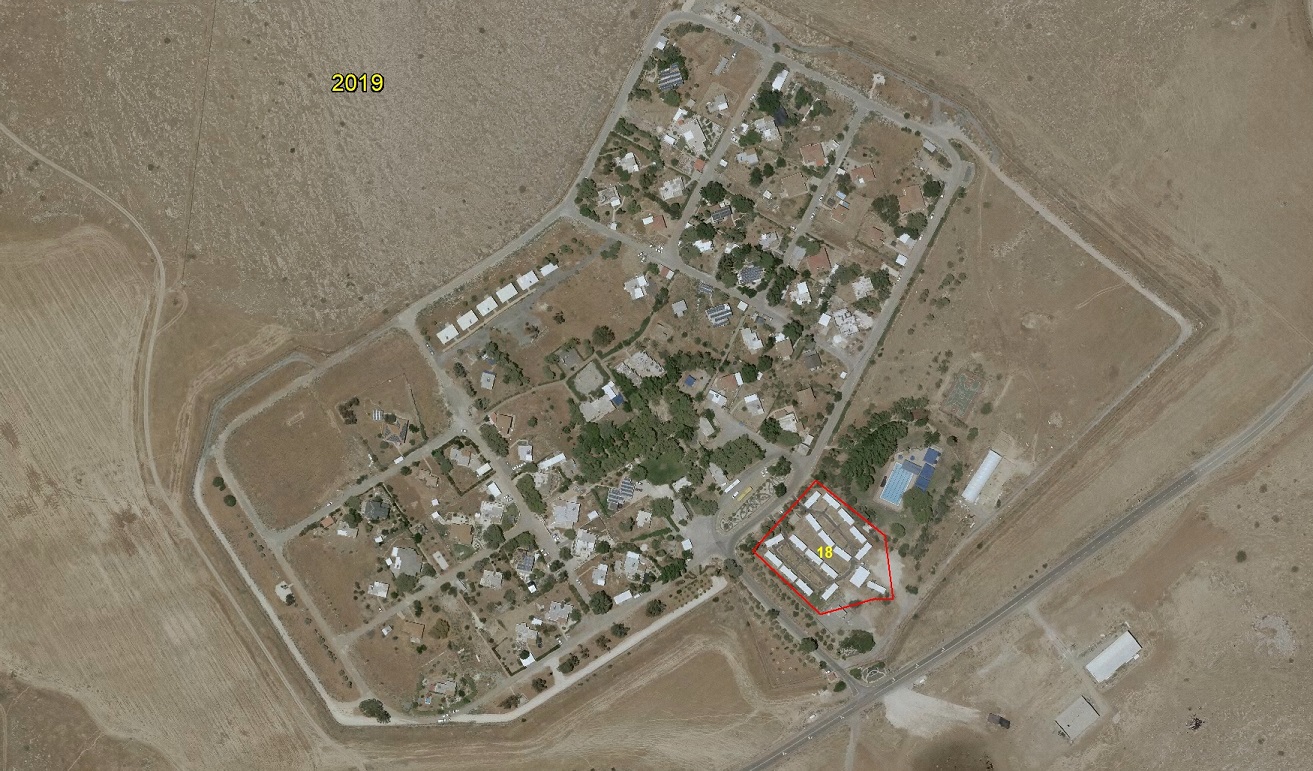 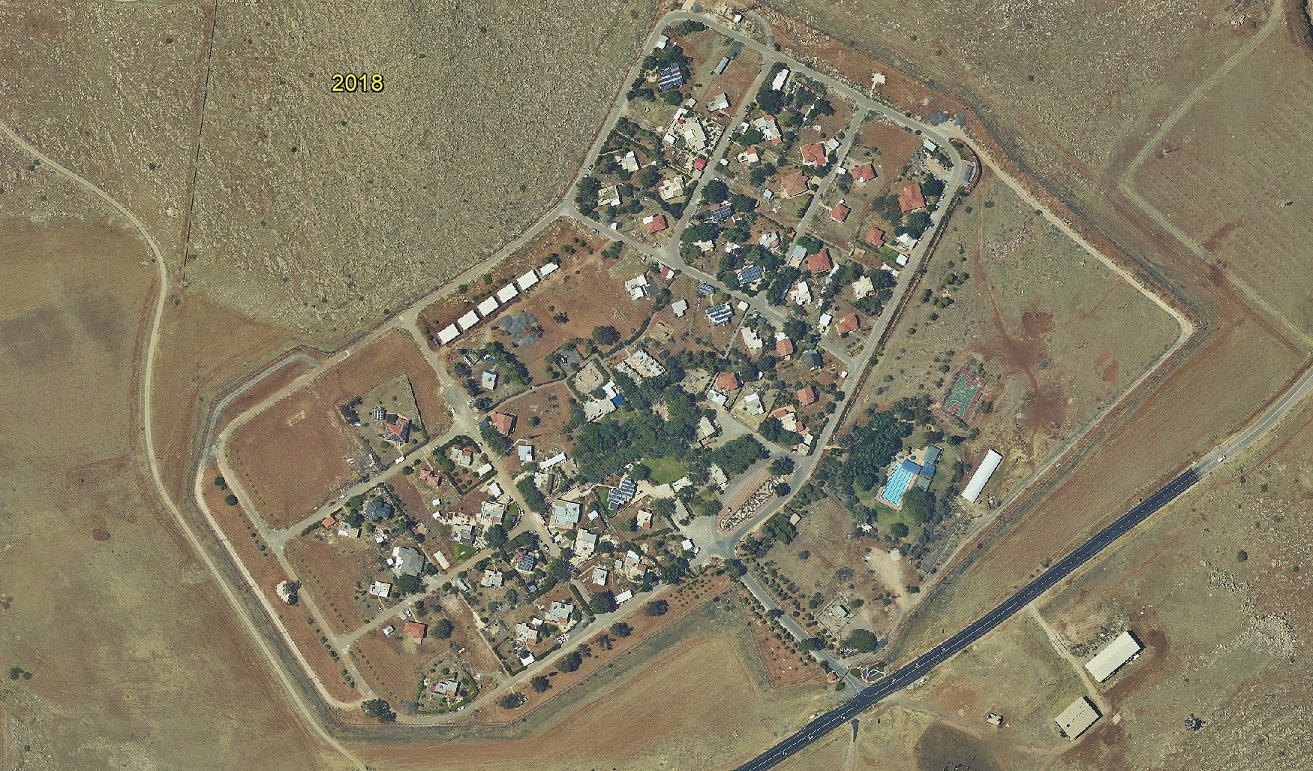 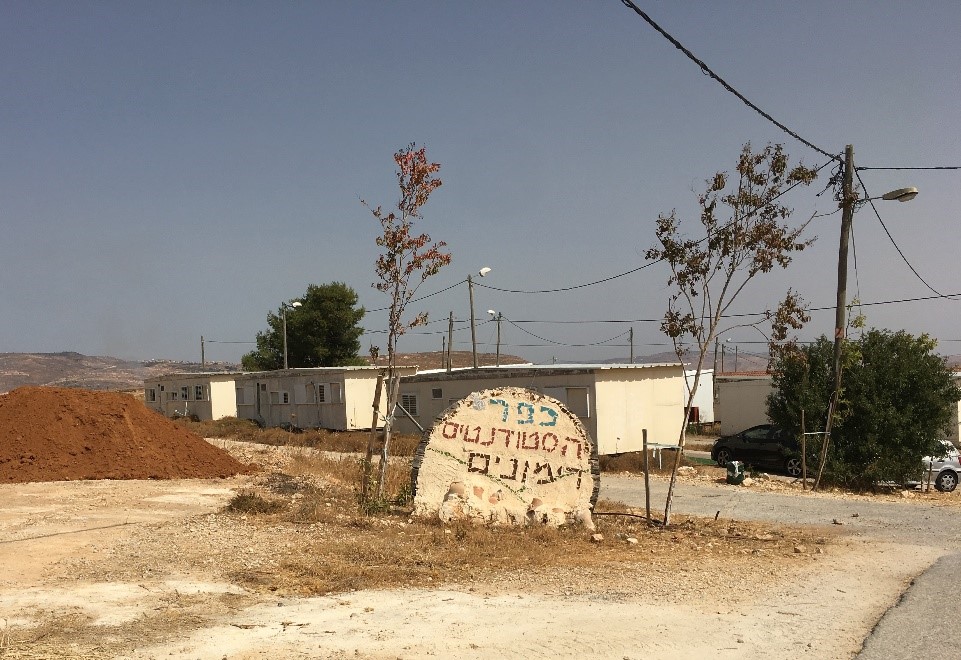 Read the report here as a PDF