On 9 March 2020, Israeli news reported that Defense Minister Naftali Bennett approved a plan for a new road for Palestinians that would allow Israel to build the separation barrier around Ma’aleh Adumim, and annex the “Adumim bloc,” including the contentious E1 area. Previously, on 20 February 2020, senior Defense Ministry officials met with planners who prepared for the office a detailed plan for the road. With the defense minister’s approval, the plan can now be brought to the Higher Planning Council in the Civil Administration. After the planning approval, it will be possible to start work.

The new road is defined as a “fabric of life” road for Palestinians, and is intended to facilitate the movement of Palestinian vehicles between the southern and northern West Bank, without passing inside the Adumim bloc (i.e. Ma’ale Adumim and surrounding settlements within the proposed West Bank barrier). As of today, the Palestinian movement from the southern to northern half of the West Bank involves traveling east of Bethlehem toward Abu Dis and al-Eizariya, eastward along the Ma’aleh Adumim settlement and then northward to Hizma and then to Ramallah. Because this is the only road that exists east of Jerusalem, Israel has not been able to build the planned separation barrier around the Adumim bloc to date, since the Palestinians have no road that would allow them to bypass the bloc that severs the West Bank in two.

Such a move to build this road should be understood in context of yesterday’s comments by Netanyahu that he had given the directive to promote major plans for building in E1. Today, the the two plans in question in E1 were deposited. It should also be taken in context of recent government actions to promote settlement construction in Givat Hamatos and Har Homa to sever the Bethlehem-Jerusalem continuum, and the early promotion of a plan to turn the decommissioned Atarot Airport into a new Jerusalem settlement that would work toward severing the Ramallah-Jerusalem continuum.

Peace Now: “This is bad news for Israel as it enables annexation toward rendering a two-state solution insoluble. The planned road would allow Israel to cut the West Bank in half, build up E1 and the West Bank barrier, and shut down the possibility of developing a viable Palestinian state.The only roads Israel paved for Palestinians in its 52 years of control over the Territories were designed to allow Israel to build settlements or barriers that block existing Palestinian routes. There is no desire here to improve Palestinian transport, only to expand the settlements.” 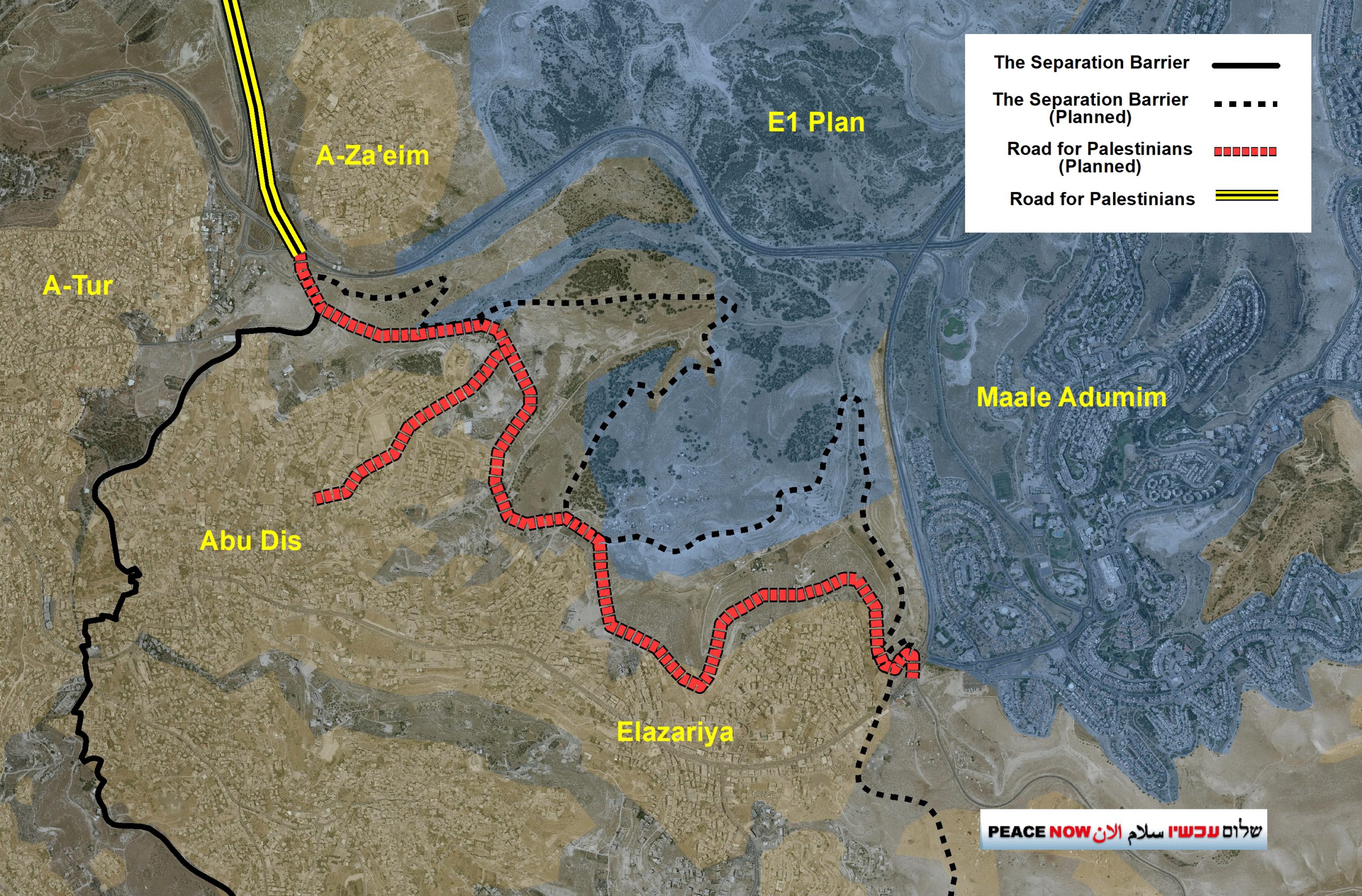 The new road is intended to allow Palestinians to pass under the route of the separation barrier, and to travel “inside” the Adumim Bloc along a wall without entering the “Israeli” side, as in a kind of tunnel. Once the road is paved, Israel can then claim that construction in E1, and the construction of the barrier around the Adumim bloc does not sever the West Bank because the Palestinians have an alternative transport route. This argument is preposterous. A thin line of road connecting separate territorial sections–transportational contiguity–does not meet the needs for territorial viability for the development and livelihoods of Palestinians in the critical Ramallah-Jerusalem-Bethlehem metropolitan area. Without actual territorial contiguity, an independent Palestinian state cannot be established and prosper, and therefore a two-state solution cannot be reached.

As explained in our brief years ago when this road was still just an idea, the road

“create only ‘transportational connectivity’- distinct communities with no real connection except via roads. Such a situation is different from ‘territorial contiguity,’ which implies a continuous area in which Palestinian life – commerce, economy, education, health services, political activity, etc. – can function and flow normally, and hopefully flourish, as required for Israel’s long-term security and regional stability. Moreover, such arrangements assume that Israeli-Palestinian peace and a two-state solution are possible without East Jerusalem being contiguous with and part of a Palestinian state – an assumption that no serous analyst would support.

It is possible that, within the context of a negotiated agreement, some of these challenges could be surmounted via mutually agreed-upon mechanisms, including innovative transportation schemes and land-sharing or land-swap agreements. However, unilateral acts by Israel that would impose this reality on the Palestinians are antithetical to the development of a stable, viable Palestinian state, undermining the legitimacy of moderate, pro-peace Palestinian leaders and empowering radicals.”

The two-state solution depends on the possibility of establishing a viable Palestinian state alongside Israel. The heart of the future Palestinian state geographically, economically, and culturally is in the metropolis between Ramallah, East Jerusalem and Bethlehem. One of the only potential development areas left for this metropolis are the areas east of Jerusalem, in the same area where Israel seeks to build the E1 settlement and create an Israeli territorial continuum from Jerusalem eastward that would effectively cut the West Bank in half.

Recall that about a year ago, the northern part of this fabric of life road (also known as “apartheid road”) was opened, and drew severe international criticism. 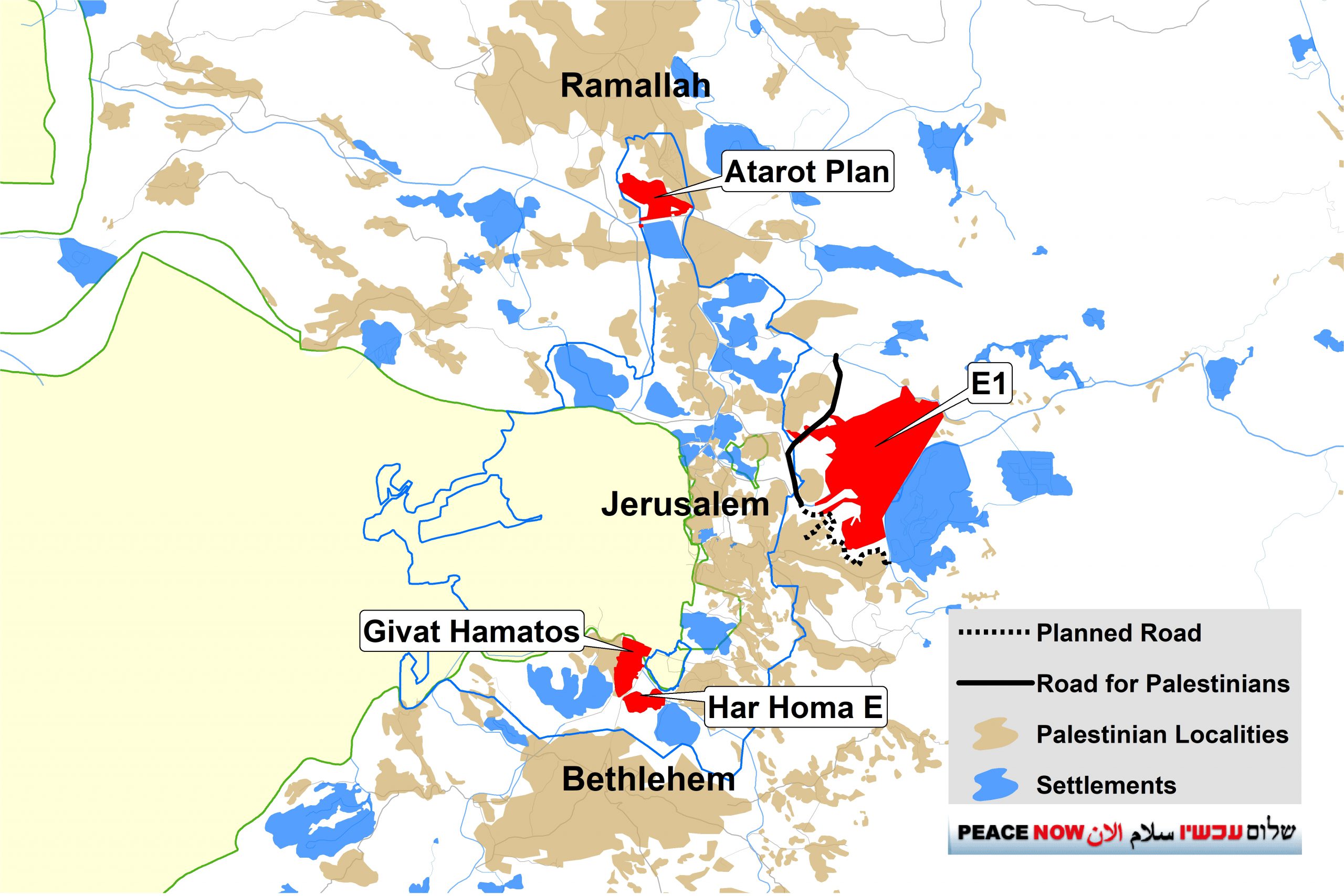