[Update from 17/1/22 – The District Planning Committee approved for depositing the “Lower Aqueduct Plan” for 1,465 units, on January 17. This means that the plan is on the track of approval which could take several months or a year till the final approval. The District Committee decided to conduct another hearing on the plans in the French Hill, and they were not approved yet.]

The local committee for planning and construction of the Jerusalem Municipality approved today, 5/1/22 five new plans beyond the Green Line in Jerusalem for 3,557 new housing units. One plan is between Har Homa and Givat Hamatos, and the other plans are on the edge of French Hill towards Mount Scopus. All of the plans are bad news for the stability of Jerusalem and for the chances for peace, but the most harmful plan in terms of the possibility to reach two states, is the plan known as the “lower aqueduct plan” south of Kibbutz Ramat Rachel near Givat Hamatos and Har Homa, for the construction of a new neighborhood with 1,465 housing units. The new neighborhood is intended to connect the settlement of Har Homa with Givat Hamatos and complete the Israeli southern ring that will block the potential Palestinian continuum between the Palestinian neighborhoods in East Jerusalem and Bethlehem.

Peace Now: As in the case of the Atarot plan, right-wing elements in the government are taking advantage of the lack of coalition agreement on the issue of settlements to advance far-reaching plans that post facts on the ground that undermine the possibility of peace. The plans add to the tension on the ground and highlight the blatant discrimination that the government is building in East Jerusalem for Israelis only, while the hundreds of thousands of Palestinians in the city can build almost nothing. The coalition parties that support the possibility of two states for two peoples must do everything so that these plans are not promoted and do not reach a discussion in the District Committee. 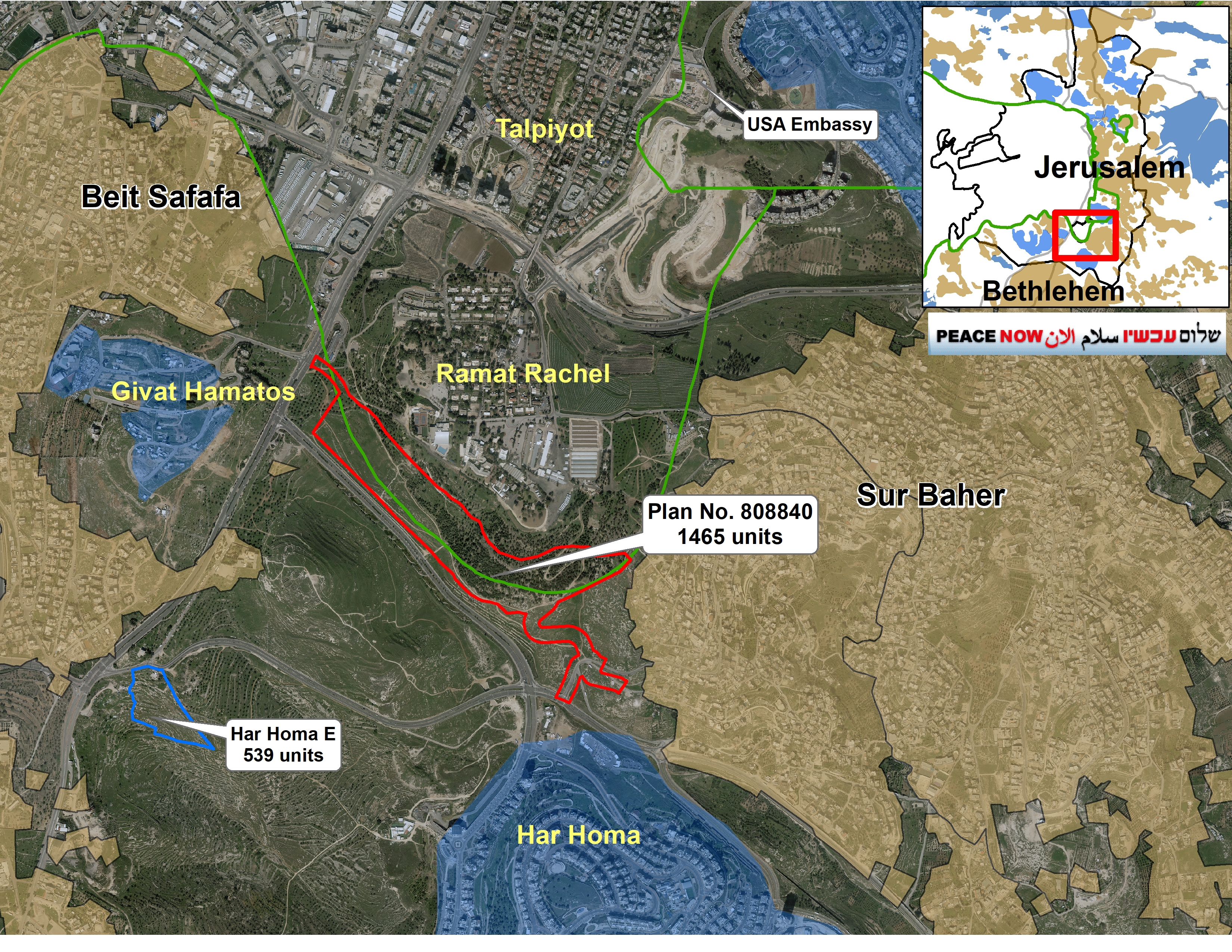 The “lower aqueduct” plan between Givat Hamatos and Har Homa

The plan to build a new neighborhood of 1,465 housing units was prepared at the initiative of the Israel Land Authority and promoted very quickly: it was put on the table of the District Planning Committee in July 2021, after the formation of the current government, and quickly went through bureaucratic preparation procedures. The Local Committee has approved the plan today, and the District Committee, which has the authority to approve the plan will discuss the plan on 17/1/22, unless it is taken off the agenda. After approval for deposit in the District Committee, the plan progresses like a snowball, there are expectations of various factors and reliance on the intention to approve it, and it is much harder to stop the plan, even if the planning process takes another year until final approval of the plan. For more information on the planning process in Jerusalem, see here.

It should be noted that about half of the plan’s land is beyond the Green Line, and about half within the Green Line, but its strategic location, between Givat Hamatos and Har Homa makes it particularly problematic politically and in terms of the possibility of Palestinian territorial continuity between East Jerusalem and Bethlehem.

Land ownership – the plan includes about 186 dunams. According to information we have, probably more than a third of them, about 52 dunams are managed by the Custodian General after being owned by Jews before 1948, similar to the land in the “Givat Hashaked” plan in Shorafat, Sheikh Jarrah and other places in East Jerusalem; About 21 dunams are owned by the JNF; about 10 dunams are considered absentees properties (owned by Palestinians living abroad), about 7 dunams are owned by the state and the rest is private land. It is interesting that the Israel Land Authority initiates a plan where most of the land is privately owned including a big amount of land administered by the General Custodian (similar to the trend revealed recently by Nir Hasson in Haaretz about the activities of the Custodian General in East Jerusalem).

About two years ago, the Jerusalem municipality promoted a plan to establish an employment center for Palestinians on part of lands of the new plan, but under pressure from the residents of Har Homa, it canceled the plan. The area is now included in the new construction plan for Israelis.

Plans for 2,092 housing units in the French Hill near Mt. Scopus

The Israel Land Authority is also promoting another four plans for 2,092 housing units in the French Hill on the edge of Mount Scopus. Most of the area is outside the Green Line near the student dormitories and the sports center of the Hebrew University on Mount Scopus. The plans also include the demolition of several hundred housing units that are currently used as student dormitories of the Hebrew University, and residential towers will be built in their place. 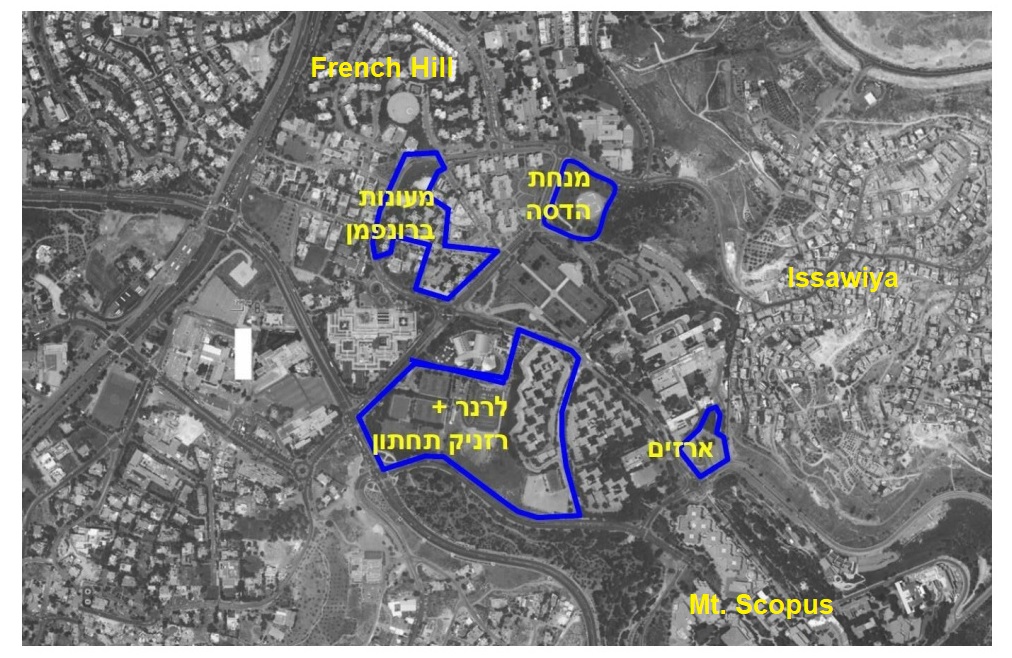 A map from the planning documents of the planned compounds for 2,092 units in the French Hill near Mt. Scopus

The area of the plan with Sur Baher at the background. Photo: Ofek-air.com