The Shamasne family, who resides in East Jerusalem’s Sheikh Jarrah neighborhood, recently received an eviction order from the Execution Office of Israel’s Enforcement and Collection Authority. The order states that the family must evict its home by August 9th 2017, or else it will be forcibly evicted.

This order follows a High Court verdict from August 2013, in which the court rejected the Shamasne family appeal, and ruled that family members are not considered protected tenants and that therefore, their landlords are allowed to evict them. The landlords are settlers who had managed to gain ownership over the property on the basis of the right of return to Jews only (see more information below).

This eviction is a part of a larger process the government is undertaking, of establishing settlements in Sheikh Jarrah. Only two weeks ago, four plans for new settlements in the neighborhood were promoted, which will change the face of the neighborhood and create a major obstacle for a compromise in Jerusalem. During these sensitive times, when violence in Jerusalem is at a peak, the government can and must stop the eviction of the family from its home. The government can decide not to send police to assist settlers with the eviction, as it has done in the past, and by doing so, prevent the eviction. 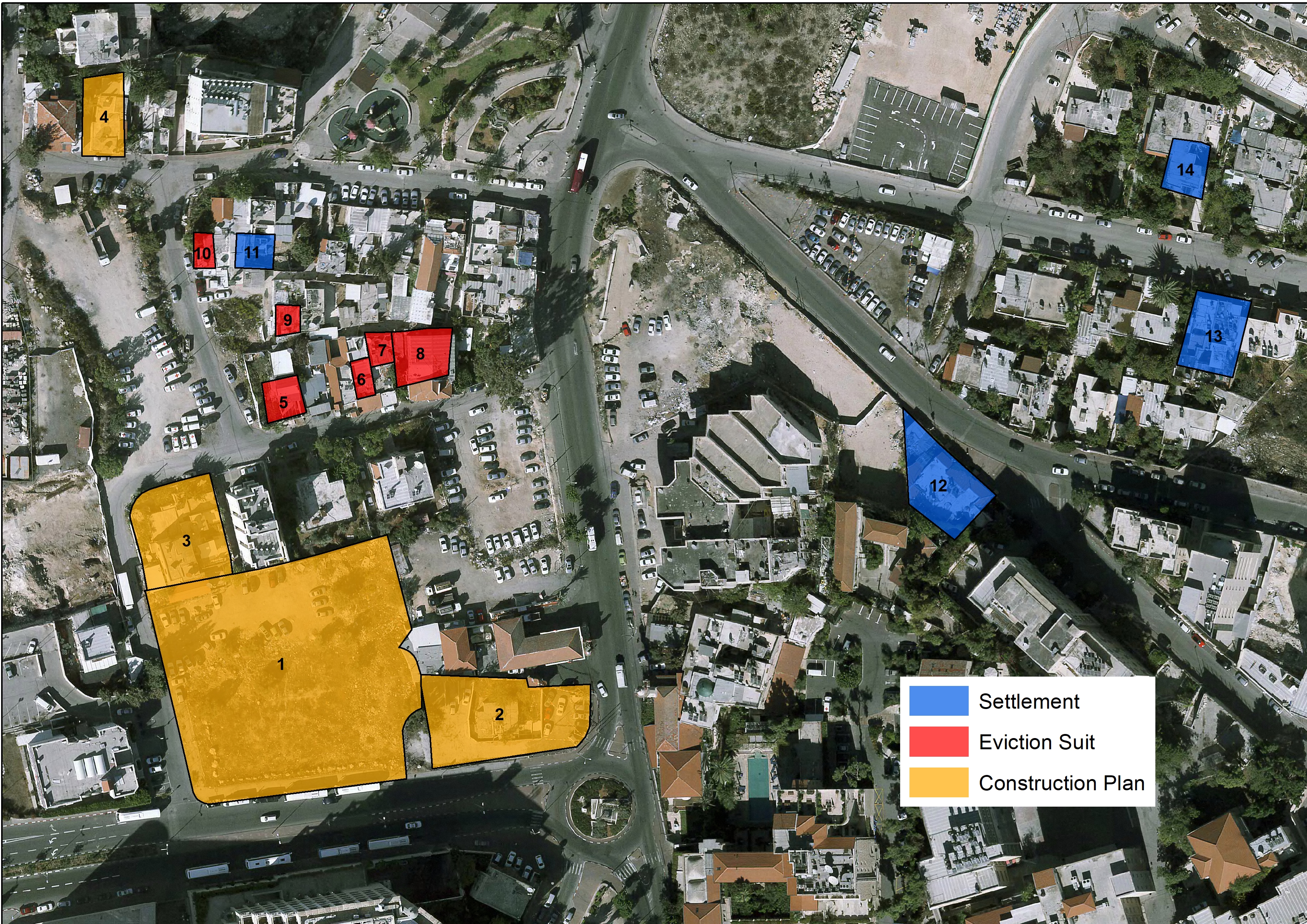 Map of Sheikh Jarrah and the Settlement Threats

The house, which is located in East Jerusalem, in an area within Sheikh Jarrah called Um Haroun (AKA Nahalat Shimon), was owned by Jews before 1948. After 1948, Jordan controlled Sheikh Jarrah, and the Jewish family had to leave its home. In the years that followed, the Jordanian government became responsible for the Jewish properties and the Jordanian Custodian for Enemy Property rented the Jewish houses of Sheikh Jarrah to Palestinian families, who became protected tenants. After 1967, the management of the properties was granted to the Israeli General Custodian, who continued the rental agreements with the Palestinian families which now became under Israeli rule.

In 1970 the Knesset legislated a law which determined that, if Jewish owners of properties in East Jerusalem, that were under Jordanian control after 1948, request their properties from the Israeli General Custodian, the latter must release their properties and grant them back their ownership rights. The law was legislated despite of the fact that Jews who lost their properties during 1948 received compensation and alternative housing (mostly in Palestinian neighborhoods that had been abandoned). Furthermore, the law does not allow Palestinians – who owned properties in Israel before 1948 to regain ownership over their properties, creating an unequal situation where only Jews may return to private properties lost during the 1948 war.

In 2009, the Israel General Custodian filed a suit against the Shamasane family, demanding their eviction. The Shamasne family has lived in the house since 1964, and obtained the status of protected tenants. Since 1967, the family has being paying rent to the General Custodian.

The Question of Protected Tenancy

The General Custodian argued at court that the Shamasna family does not have a protected tenancy status, and therefore, the lease can be stopped at any time. Apparently, the family subleased the apartment in 1964 and did not have a contract with the Jordanian Custodian of Enemy Property.

The General Custodian at The Service of The Settlers

The Magistrates Court of Jerusalem rejected the family’s claims and accepted the lawsuit of the General Custodian ordering the family to evict the house. Without a formal contract between the Shamasna family and the General Custodian, the court ruled that the family does not enjoy a protected tenancy status. The judge also emphasized the fact that the prosecutor was an administrative authority thus the case did not take place between two equals. The Shamasne family appealed to the District Court, but the court rejected the appeal.

The General Custodian explained to Peace Now that Attorney Mina represents the heirs and did not answer directly to whether it gave him the power of attorney or whether it had any involvement in the prosecution. However, it became clear that Attorney Mina was representing the interests of the heirs throughout the whole time, and that the General Custodian cooperated with the heirs by enabling them to use its name as an administrative authority something which helped them win the case and the appeal to the District Court.

The High Court rejected the appeal on August 28th 2013, and now, following proceedings of the execution office, the family’s eviction is scheduled for the beginning of August.