Two weeks ago, Israeli authorities started to work in order to open a traffic lane near the Keidar Settlement for Palestinians that had hitherto been used exclusively by settlers. Settlers who noticed the works decided to block the road and held a protest at the site for hours. Finally, after they achieved the support of right-wing politicians, they put the road divider back in place and prevented Palestinians from accessing the road.

An attorney on behalf of the Keidar Settlement sent an urgent appeal to the Defense Minister demanding to stop the road opening and declared his intention to file an urgent petition to the Supreme Court if there is no response within 24 hours.

Peace Now: For over 20 years, hundreds of thousands of Palestinian vehicles have been forced daily to drive on a slow and congested road while a handful of settlers have a parallel freeway. When Israeli authorities finally decide to open the road to Palestinians, settlers forcefully prevent it. This story is a microcosm of the occupation: the government is worried about the settlers’ security and comfort, and the Palestinians are always the ones who pay the price for it. The Israeli government must not surrender to these disrespectful and loud settlers demanding to continue the apartheid. 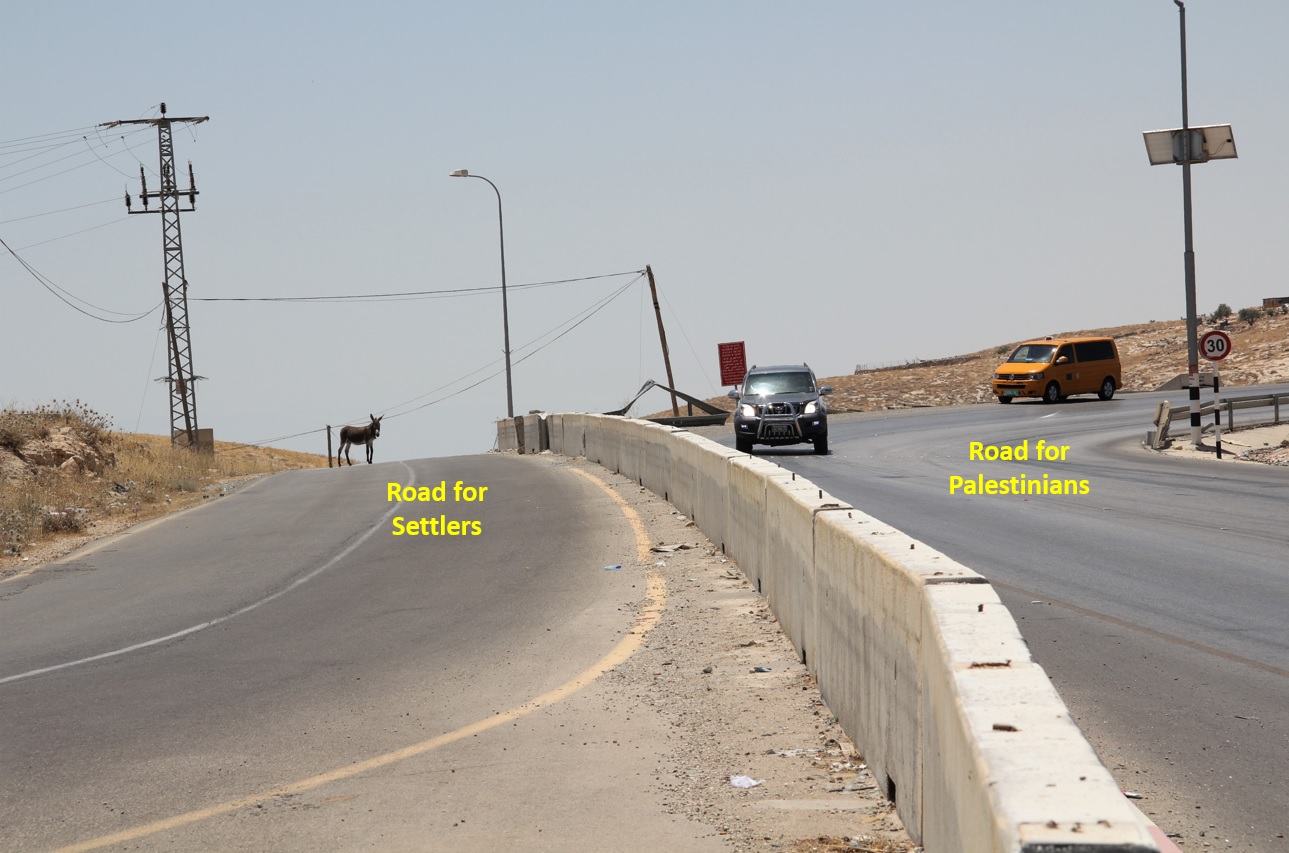 The bypass road and the road divider

Background: A main road for the Palestinians and a road to a small settlement

In the 80’s, the Keidar settlement was established southeast of Elazariya, and the road to it passed, like all the roads to settlements at the time, through the Palestinian towns along the way. In 2003, Israel paved a 4-kilometer-long road that bypasses Elazariya, on land that most of it was expropriated from Palestinians. This road had cost millions of Shekels and was intended to serve around 600 settlers who lived in Keidar at that time (about 200 cars). To this day, the road is exclusively for the use of settlers, and the potential crossing to it from the Wadi Nar Road was blocked by Israel.

Currently, around 1,600 settlers live in Keidar, and their road, which bypasses Elazariya and leads to the main road, takes about 6 or 7 minutes to drive at every hour of the day. On the other hand, the road that thousands of Palestinian vehicles are forced to drive on every day, leading from the same point to the main road is about 5 km long, passing through the crowded houses of Elazariya, and taking around 12 minutes and more than 20 minutes during rush hours.

The Wadi Nar Road, a winding sideroad with sharp ascents and descents, became the only Palestinian traffic artery from north to south due to the Israeli policy. There is no alternative road where one can cross from the north to the south of the West Bank. For this reason, this road is congested most of the time, and it has many safety challenges. Despite this, the Israeli government did not care about the Palestinians´ needs and safety, did not look after the road that most of it passes through Area C under complete Israeli control, and did not pave alternative roads for it.

Due to the great distress provoked by the heavy traffic that severely damages the Palestinian economy, some donor countries, especially the US, have mobilized to fund the expansion and upgrade of the Wadi Nar Road, as well as other roads. Now, the Wadi Nar road has two lanes but still does not meet all the expectations concerning the growing traffic among Palestinians. It turns out that the Israeli government is ready to afford to harm the Palestinian fabric of life, for settlements or security reasons, but those who pay for it are the taxpayers of foreign countries.

In this sense, the story of this road is a microcosm of the Israeli occupation: Israel harms the Palestinian economy on a daily basis, prevents its development, bans construction (and in the case of Gaza, shells and destroys infrastructure), and those who pay for it, and in fact, allow it, are the donor countries.

The Settlers’ claim: Security, as always…

The settlers claim that opening the road for Palestinians is a security threat and a safety hazard. According to them, the road was not built for the traffic loads that are expected on it, and that standing in a traffic jam among Palestinian cars is dangerous for them. The security justification was also Israel´s pretext to prevent the road from being opened to Palestinians during all these years that have passed since its pavement and construction.

But the truth is that those same Keidar settlers are driving on another road from Jerusalem towards Maaleh Adumim, which is used jointly by them and by Palestinians. Only when one enters Elazariya, the road to Keidar becomes a settlers-only road. Tens of thousands of Palestinian vehicles and thousands of Israeli cars drive on the Maaleh Adumim road every day, and there were no special security incidents. The public busses to Maaleh Adumim are not armored, as opposed to public transportation in many of the settlements, probably because it was never necessary.

The actual consequences of the opening of the road next to the Kedar settlement are mainly on two levels:

The traffic load  – It is possible that the number of vehicles on the road will indeed burden and slow down the traffic.

The Settlers’ sense of security – In a letter sent by Keidar residents to the Defense Minister, they lament that the road will harm, among other things, their ‘sense of security.’ Indeed, they have been driving on this road without Palestinians around for many years, and now that ‘sense’ will change.

The story of the bypass road to the small settlement of Keidar is, as was mentioned above, an example of the Israeli occupation: Israel settles within the Palestinian territory and does everything at hand so it will not feel like it is Palestine. 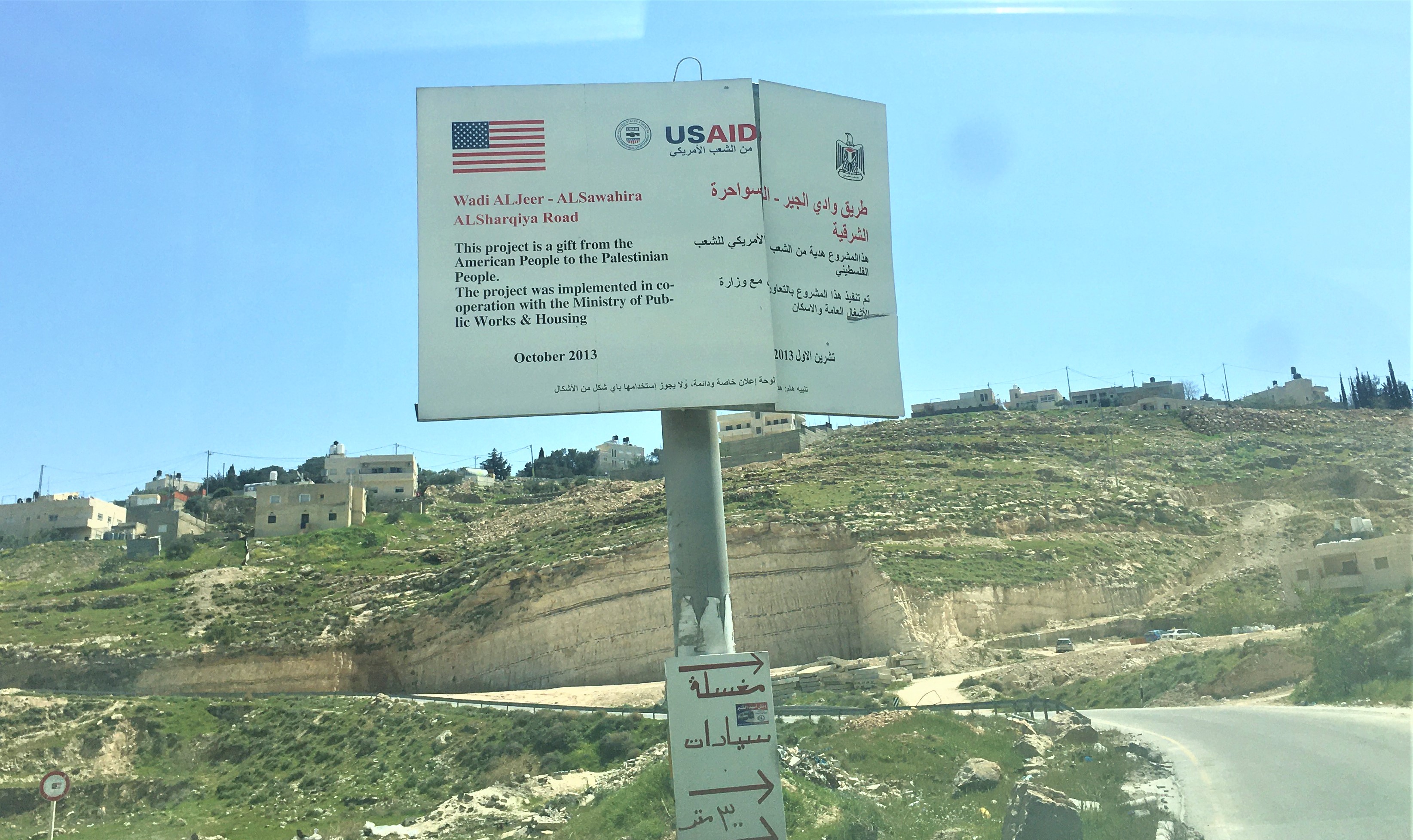 USAID road billboard, next to the Wadi Nar road