The Jewish National Fund (JNF) will officially adopt plans to get Palestinians to sell land to them in the West Bank, according to an exposure by Israeli journalist Barak Ravid. JNF’s new management, elected about two months ago, has prepared a draft resolution that is due to be approved by its board next week. The JNF has apparently tried to keep the decision secret, with the draft resolution delivered by hand to board members. According to the report, this official direction taken by JNF could pour millions of dollars into settlement expansion efforts.

Peace Now: “Here we see how settler supporters are using the Jewish National Fund, one of the cornerstones of Zionism, to destroy the Zionist vision. Expanding the settlements and promoting the de facto annexation of millions of Palestinians will end the possibility of a Jewish and democratic state here by leading us into a permanent one-state reality.

The JNF is a body that belongs to the entire Jewish people, and the settler activists who took over the centers of power in the JNF have found a ‘bank’ with a budget of billions of shekels from the Jewish people to finance the dubious activity of purchasing land in occupied territory.

Anyone who lends a hand in turning the JNF into the body of an anti-democratic radical fringe group is endangering the future of Israel.”

Background to the decision
About two years ago, it was revealed that the JNF had poured tens of millions of shekels into the purchase of land from Palestinians in the West Bank, without approval from the board of directors and in violation of JNF procedures. Following the exposure, officials within the JNF’s board of directors managed to stop the transfer of funds and stop the continued activity of purchasing the land.
In November 2020, a new management was elected for the JNF and representatives of the right-wing parties won a majority on the board. Since then, one of the first actions of the new management was to try to reopen the money transfer pipeline for the purchase of land in the West Bank, hence the proposed resolution that is due to be discussed by the JNF board next week.

Meaning of the decision
By officially declaring that it will be conducting settlement activity in the West Bank, the JNF is openly violating international law. Although the JNF has always had activity in the Occupied Territories, both in financing projects in the settlements and in purchasing land, this has always been done discreetly, and there have been years when land purchases have been halted. If the proposal is approved, the JNF will no longer be able to abdicate responsibility and claim that the actions were taken without authority or unofficially. The JNF will be taking full responsibility for its activities in settlements and their violation of international law. It is possible that this will put the JNF on the list of the accused by the International Criminal Court (ICC) in The Hague.

Contrary to the goals of the JNF?
The JNF was established to assist in the establishment of the State of Israel and the mandate given to it by the Jewish people is to act “in the State of Israel in any area under the jurisdiction of the Government of Israel.” The activity outside Israel’s sovereign territory in the Occupied Territories raises legal questions, not only in terms of international law but also in terms of its suitability for the purposes of the JNF itself.Following the disclosure of the acquisitions made without the approval of the Board of Directors, the management of the JNF appointed a special legal advisor, retired Judge Sefi Alon, who ruled on the one hand that the transfer of funds without board approval was illegal, but on the other hand that the JNF was allowed to operate in the Occupied Territories, and that the sentence “in any area under the jurisdiction of the Israeli government” should be interpreted as including the West Bank settlements.Injecting millions of shekels into dubious transactions – the JNF’s budget is over NIS 2 billion per year, and it consists mainly of Israel’s money transferred to its many assets in the country as part of an agreement between the JNF and the Israeli government, as well as several tens of millions of shekels from donations from the Jewish people. The JNF decision will allow the flow of astronomical budgets to the dubious activity of purchasing land in the territories.

As Israeli journalist Raviv Drucker explained in his investigation on the subject, the settlers found themselves a convenient “bank” that enables them to maintain enormous budgets without supervision nor a need to fundraise for them to carry out controversial ideological activity.

It is important to emphasize that land purchases in the West Bank is shady, often non-transparent business. Because Israelis and Palestinians have a national dispute over land, over the years the sale of land to the other nation has been seen as a betrayal. Indeed, the Palestinian Authority prohibits it. Therefore, all real estate transactions between Israelis and Palestinians are done in the dark, without supervision, and in many cases with forgery and fraud.

The use of land for the development of settlements – One of the only factors that almost succeed in stopping the expansion of the settlements is the fact that the land on which it is built is privately owned by Palestinians. Although according to international law all settlements are illegal, according to Israeli interpretation it is permissible to build settlements as long as they are established on “public lands.”

The only way out of many settlements for expansion (or to prevent eviction following court petitions) is to purchase land from Palestinians. Therefore, in almost all the cases in which the landowners petitioned the High Court to vacate the houses of settlers, the settlers presented purchase claims (most of which turned out to be forgeries).Buying land, and even forging a purchase, is a very expensive procedure and requires a lot of resources. A source as rich as the JNF is a gold mine for the settlers, as it allows them to expand settlements to private lands around them.

Moreover, in the case of public land it is managed by the government authorities and is subject to the rules of proper administration. In the case of privately-owned land such as that of the JNF it can do with it as it pleases without the need for transparency or tender procedures. (The advantages of this can be seen, for example, in the case of the Givat Eitam outpost).

The wording of the decision
The wording of the proposed resolution includes a decision on the continued activity of the JNF and the financing of projects in the West Bank, as well as on the purchase of land in the territories:
“The JNF will work to develop settlement in Judea and Samaria,” including the promotion of projects, educational, community, outreach activities, as well as activities for forestry, environmental protection and the preservation of open spaces. 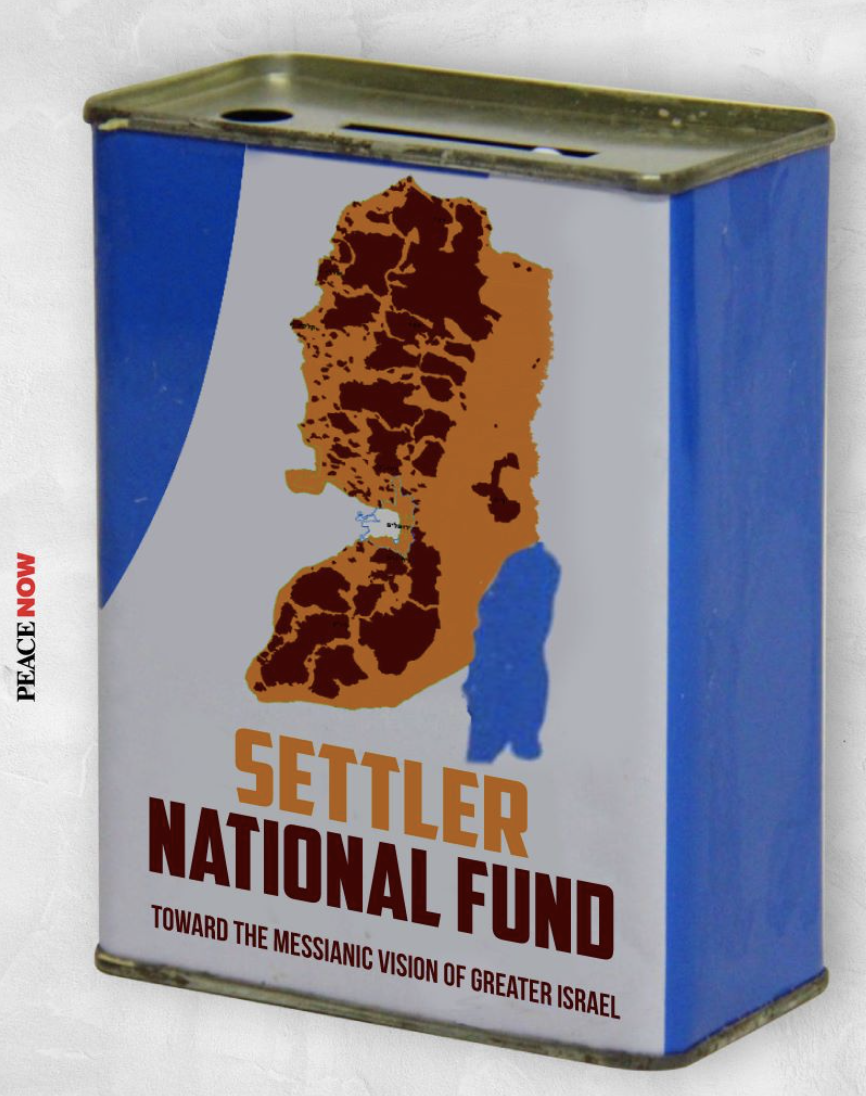 Settlement Spin Claim: Israeli purchases of Palestinian private land is purely a transaction between individuals. This is simply about Jews being able to live in their land.

The Reality: Such purchases of land, like all Israeli settlement activity, is to ensure that the West Bank remain under Israeli control. This is not a private transaction but part of an effort toward formalizing Israeli sovereignty over Area C while Palestinians languish without full rights in 165 nominally autonomous archipelagos or live under direct Israeli control with no autonomy, excluded from purchasing land in 60% of the West Bank.

The JNF is not interested in purchasing land for Jews to live in a future Palestinian state. It wants to acquire the land in order to assert an Israeli sovereignty claim to the territory.

As for the Palestinians, it is worth noting that since 1967, 99.76% of state land Israel has allocated in the West Bank has gone to Israeli interests, while only 0.24% has gone to Palestinians (mainly for resettling some or compensation for taking some land). There is virtually no chance for Palestinians living in Area C to ever get land allocated to them. And as for the majority of West Bank Palestinians living in Areas A and B, what was supposed to be a phased Israeli redeployment from Area C over a handful of years has turned into a 25-year nightmare where they find themselves in 165 enclaves, unable to build in what effectively is the Area C land reserve that makes up 60% of the West Bank. A cursory look at the dozens of small enclaves of Area B is enough to understand how small towns are tightly encircled by the Area B-C line, effectively choking them like Indian Reservations (except today Native Americans can live anywhere and have citizenship).

Recent Activities of the KKL-JNF in West Bank settlements 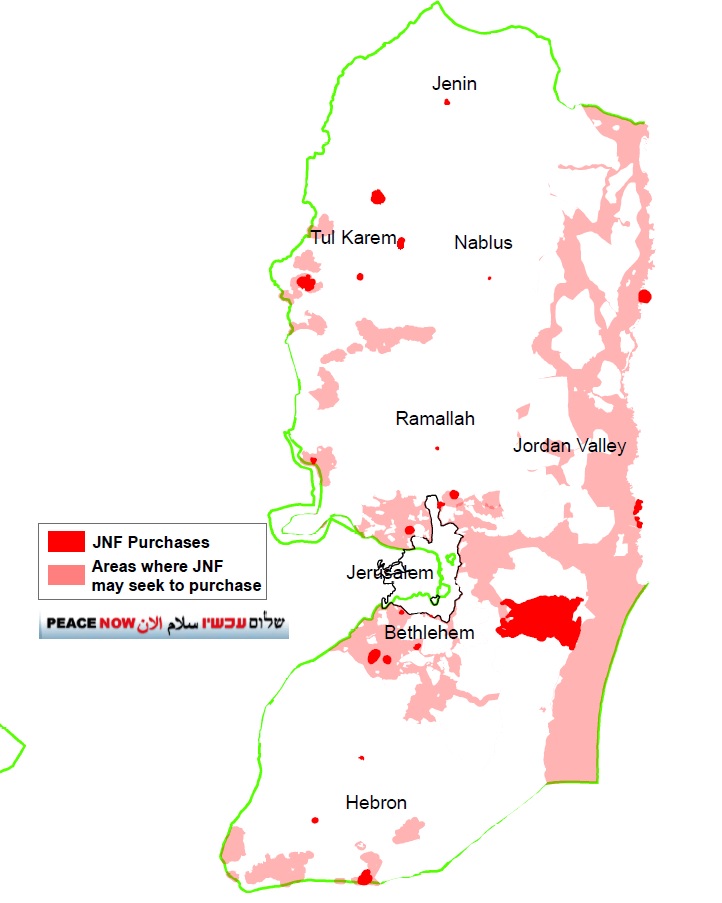