Only 16.5% of Jerusalem’s building permits are for Palestinians, whom constitute 38% of the city’s residents

Media coverage for this update can be found in the AP, Washington Post and New York Times.

According to data the Jerusalem Municipality sent to the Movement for the Freedom of Information after two years of delays on building permits approved by the Local Planning and Construction Committee from 1991 to 2018, while 38% of the city’s residents are Palestinians, only 16.5% of the building permits were given for construction in Palestinian neighborhoods.

The figures also indicate that 45% of all Israeli building permits in Jerusalem were in Israeli neighborhoods beyond the Green Line in areas unilaterally annexed by Israel in 1967.

What is a construction permit?
After the planning process and approval of the construction plans (and in the case of government-initiated construction, after the tender process), when there are developers who wish to implement the planned construction, they must obtain a building permit from the local authority. The Local Planning and Construction Committee reviews the permit applications and their compliance with the applicable plans, as well as safety and environmental standards, etc. After the committee approve the permit, there is some bureaucratic procedures, the municipality issues a building permit and the developers can begin construction. Typically, between the permit approval and the start of construction, it takes several weeks to months. Most of the approved construction permits are also actually built, thus they are a good indicator of the number of units actually built.

Another notable figure is the average number of units approved in each permit. While in Israeli neighborhoods both in East and West Jerusalem the average is 10.5 units per permit, the average in Palestinian neighborhoods is 3.5 units per permit. This means that the construction in Israeli Jerusalem is for much larger projects, including bigger buildings and compounds, while construction in Palestinian Jerusalem consists of much smaller projects, less organized and in a more sporadic manner.

For more on construction planning neglect in the Palestinian neighborhoods of Jerusalem, see – Deliberately Planned – a report of Bimkom and Ir Amim.

In the absence of planning and with virtually no chance of obtaining building permits, East Jerusalem Palestinian residents are forced to build without permits and live under the constant threat of demolition. Over the past three years, nearly 200 structures have been demolished in East Jerusalem per year (a sharp increase since the Obama administration years). 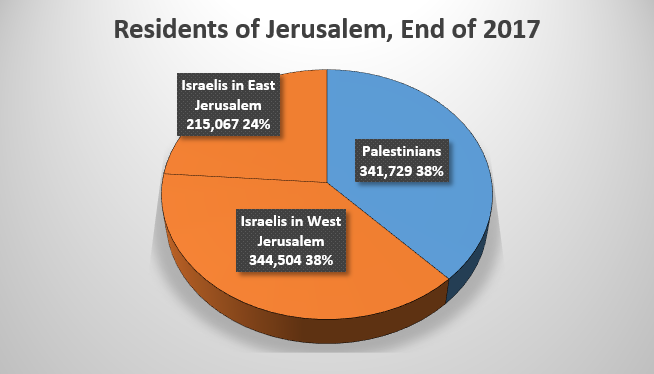 The graph of construction permits in Israeli neighborhoods in East Jerusalem tells the story of the settlements there. For instance, in 1991, 2,096 housing units were approved, almost all of them were in the Pisgat Ze’ev neighborhood, which was then in the advanced stages of construction. 2000 was the year in which the Har Homa settlement began to be built (1,707 housing units), after the approval by Prime Minister Netanyahu in 1997 to establish Har Homa as the first new settlement since the Oslo Accords.

C. Data quality and accuracy:
1. Difficulty in obtaining data – The information requested and received from the municipality of Jerusalem is a list of all construction permits approved over the years since the system was computerized. On 13 November 2017, the Movement for Freedom of Information applied to the Jerusalem Municipality to request the information. This is after a request that the Peace Now motion in December 2014 was only partially complied with, without the data being complete.

About four months later, on 7 March 2018, the Jerusalem Municipality’s response was finally received, with the list of building permits without detailing the number of units approved in each of the permit. The municipality reported that the information does not exist in the computerized system. But since Peace Now had an old file from the computerized system from a few years ago with information on the number of units, a new round of correspondence and conversations began and the Jerusalem Municipality moved to acquire the full information.

The Movement for Freedom of Information file a new application on 15 January 2019. It was only on 30 May 2019 that the municipality sent a reply, but the requested information was given in a PDF file and the attempts to convert it to Excel to be analyzed and examined amounted to nothing. Only after the threat of filing a petition in court was the information in Excel format finally received, on 9 July 2019.

2. Quality of data – The list received from the Jerusalem Municipality included information on tens of thousands of permits, including the permit number, date of approval, number of housing units added, address, neighborhood, and the plan  number according to which the permit was granted. Peace Now still had to screen the data: erasing duplicates, correcting some typos (in some cases the wrong number of housing units was typed, or an incorrect neighborhood name was entered). It is important to emphasize that despite efforts to improve and correct the data, there are still data inaccuracies. But since these are large numbers of thousands of housing units, the order of magnitude is  likely to be negligible. The information was also checked against CBS data on construction starts, and similar trends were discovered. 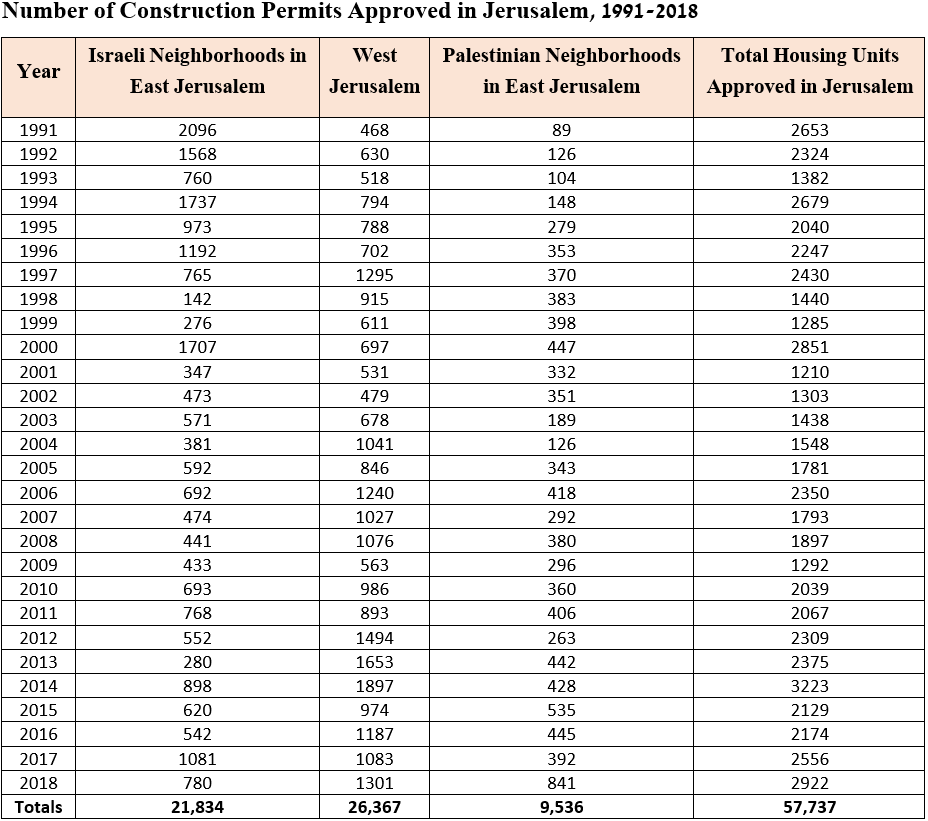