Another fact exposed by the Ministry: Out of approx. 50 farm-outposts, only six received legal right to the lands

The ministry of agriculture has given, over the past few years, approximately 2.6 million NIS to the “Hashomer Judea and Samaria” (AKA “Hashomer Yosh”) association which sends volunteers to agricultural outposts in the West Bank. In response to Peace Now’s query, the office of the legal advisor of the Agricultural Ministry admitted that the Ministry funds the association, despite the fact that the association works in illegal outposts, on tens of thousands of acres with no rights to the land. Whereas the association declared activity on 52,000 dunams, the Civil Administration approved land allocation for 8,719 dunams only, and that in six outposts of the total of 50. According to the Ministry, it “only” funds the activity in outposts where settlers have permission to cultivate or graze the land, thus does not intend to stop supporting the association.

The Ministry’s response further reveals that it had funded another two associations who work in illegal agriculture outposts. The two associations (Kedma and Beit Yatir Preparatory) also declared to be working in tens of thousands of dunams, while only 8,719 dunams were legally allocated to the very same farms as of the Hashomer Yosh’s farms.

In other words, probably only six farm-outposts in the West Bank has rights to the land, and the three associations are using them in order to gain funding of millions of NIS from the government, which enable them to support farmers on thousands of acres in practice.

It’s important to emphasize that land allocation permission does not grant permission to build an outpost. At most, those who have been allocated land are permitted to cultivate it or use it for grazing, but the structures of the farm-outpost itself is not legal unless there is an official construction permit.

Peace Now: “The Ministry of Agriculture takes millions of Shekels of public monies and give them to associations which are intrinsically linked to illegal activity. If the government wants to stop more outposts such as “Evyatar” from existing, and to stop the small group of ideological settlers who allow themselves to set facts on the ground that determines the foreign and security policies for Israel, it must change its ways immediately and stop supporting outposts and illegal activities”.

For the Ministry’s respond (in Hebrew) – click here.
For the protocol of the funding committee, June 3rd, 2021 – click here 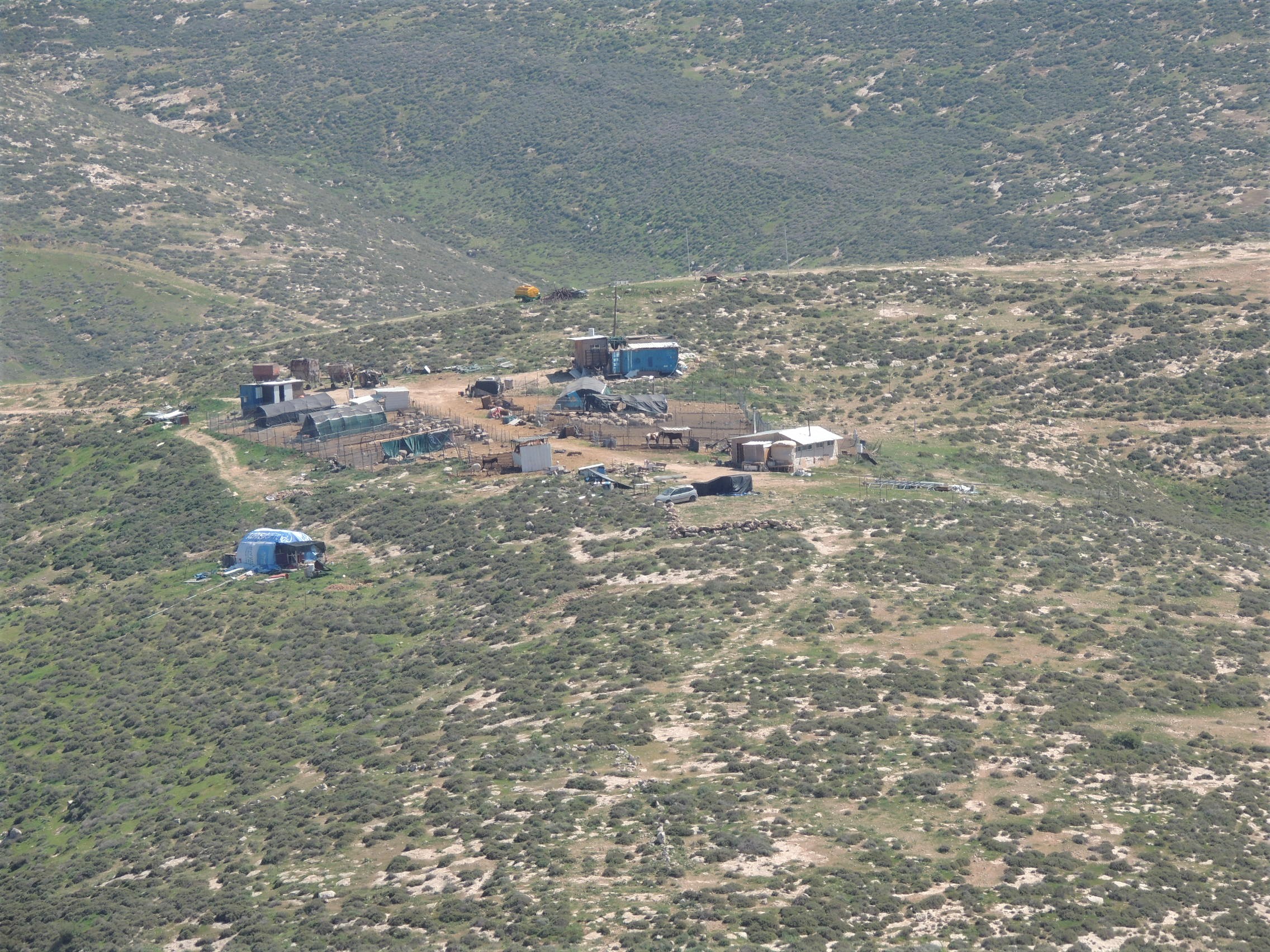 In recent years about 50 agricultural outposts (or “farm outposts”) were founded in the Occupied Territories and they control tens of thousands of acres. Thus, with relatively small investment (one family and a few young boys who herd sheep or cows upon a hill), settlers are able to take over huge amounts of land and dispossess Palestinian farmers from that same land.

For some of the agricultural outposts, violence is a core practice for taking over land. Residents of the outpost, or those who come to assist, sometimes threaten and even exercise violence against Palestinian farmers and shepherds from those areas. Hundreds of testimonies and film footage from recent years are evidence for the violence that these agricultural outposts entails, and in some instances settlers wearing “Hashomer Yosh ” t-shirts or hats were documented attacking activists and chase Palestinian families off their lands.

The official goals for Hashomer Yosh association are “strengthening the personal and economic security of agricultural workers, farmers and herd breeders in Judea and Samaria through voluntary safeguarding so that damages to land and property does not occur. Aiding work and guardianship and training for volunteers”.

In practice the organization sends groups of volunteers, either joining privately or organically organized by educational institutions, to guard and help in the agricultural outposts across the West Bank. According to publication by Hashomer Yosh outlining which outposts are available for volunteering work (which gives credit points from Ariel University), the association supports at least 28 illegal outposts across the West Bank. The response of the Ministry of Agriculture shows that only 6 of these outposts have land rights (and this, as noted above, does not entail a building permit, thus the agricultural outposts themselves are illegal).

According to the financial reports of Hashomer Yosh, and according to data from the state’s budget it appears that in the three years between 2018-2020 the Ministry of Agriculture transferred the association about 2.6 Million NIS, which constituted the majority of the association’s earnings. In April 2021, Peace Now approached the Ministry of Agriculture and demanded that it stops funding Hashomer Yosh as it assists illegal outposts.

In the Minstry’s response it appears that there are two other associations which has similar activities and enjoy millions of NIS in funding:

Kedma association – activates student villages, volunteering and youth programs, mostly in the West Bank. According to the association’s website, its activists help agricultural endeavors over 20,495 dunams. In the request for support that the association filed to the Ministry of Agriculture it claimed it was active in 46,471 dunams, out of which only 1,195 dunams have rights to lands, in one agricultural outpost near Nablus. In 2020 Kedma association received from the Ministry of Agriculture 530,000 NIS, and overall between 2016-2020 it had received from the Ministry 7,323,615 NIS.

Overall the Ministry of Agriculture approved in 2020 alone approximately 4 Million NIS for the three associations, while officially the entire sum was dedicated “only” for the activities in 8,719 dunams with land rights, knowing that the activity of the associations is in fact in many more illegal places.

The legality of agricultural outposts

According to the regulations of the Ministry of Agriculture, in order to gain support from the Ministry in the field of assistance to farmers, one has to present a “permit for legally holding the land”. The idea is that the Ministry will not support activity in lands taken illegally by the farmers. However, in 2020 because of COVID, an exemption was given even to show right over the land and the support was given without further investigation.

On June 3rd, 2021, the legal advisor of the Ministry advised that such proof must be an official approval from the Civil Administration that the farmer has rights to the land, and that any other paper, including contracts with the Settlement Division (which is a non-governmental body vested with government powers allocating lands in the West Bank), are not sufficient. Following this new guidance, the funding committee of the Ministry reconvened to approve the funds to the associations. It turned out that only 6 of the dozens of farm outposts had managed to prove rights to the lands, nonetheless, the millions to the associations were approved.

It is important to stress that rights over the land do not make the outpost legal. Besides land rights, every structure erected on the land requires a construction permit, even if it is a temporary structure or sheep pen (testimony to that will be 413 Palestinian non-residential buildings which were demolished in Area C for lack of permits in 2020 alone). As far as Peace Now knows, no agricultural outposts in the Occupied Territories have building permits (apart from Givat Eitam farm and Shaharit farm).

The office of the legal advisor of the Ministry of Agriculture dismisses the question of legality of funding, claiming that the millions given to associations are for activity in these six outposts only, for: “participation in salaries, training and education, volunteers’ travel, food and accommodation expenses, equipment for volunteer activities, agricultural work, fencing and guard work, advertising expenses as well as renovation expenses used for volunteer accommodation.”

The agricultural outposts which have land rights approval

In the response of the Ministry of Agriculture, only six outposts are presented as having permit from the Civil Administration for land rights, out of approx. 50 agricultural outposts known to us in the Occupied Territories. Three of these outposts which gained rights to the land are in the South Hebron Hills over accumulative territory of 6,608 dunams, two in the Jordan Valley area and one near Nablus. (For comparison, the municipal area of the Israeli city of Givatayim with 60,000 people, is approximately 2,500 dunams).

The list of farmers with rights to the land:

Shabtai Kushilevsky – 2000 dunams – A farm near the Tene-Omarim settlement in South Hebron Hills.

Nati Shwelb – 1,195 dunams – a farm near the settlement of Alon Moreh, near Nablus.

Neri be Pazi – 546 dunams – in the East of the Jordan Valley, near Kochav Hashahar settlement. 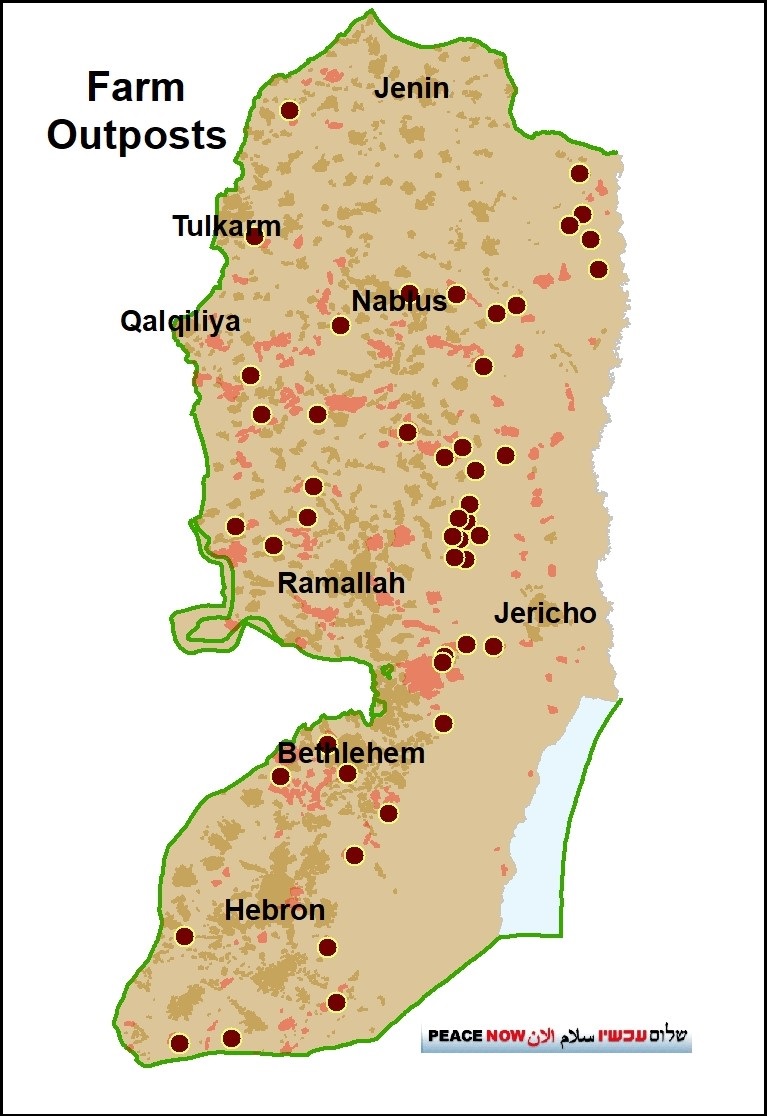