Israel’s policy in the West Bank is determined by the Israeli government, yet the United States’ influence on this policy is paramount. In President Donald J. Trump’s four years in office, there have been far-reaching changes in the American position on Israeli settlements that have shattered the international consensus around a two-state solution, and which have promoted annexation in all but name. The de facto annexation has manifested itself in high levels of settlement unit approvals, transgressions of informal international red lines in highly sensitive areas like the Jerusalem environs and Hebron, and the building of over 30 new outposts. Consequently, de jure annexation became a legitimate topic in the Israeli and American governments, while Israel has created for itself and the Palestinians a near permanent, undemocratic one-state reality.

Peace Now: “The Trump administration lent the power of the United States to the benefit of the narrow interests of a small, radical group of settlers, and has done enormous damage to Israel. We expect the incoming administration of President-Elect Biden to be attentive to the peace-seeking majority in Israel and to restore the United States to its status as a constructive intermediary for a two-state solution.” 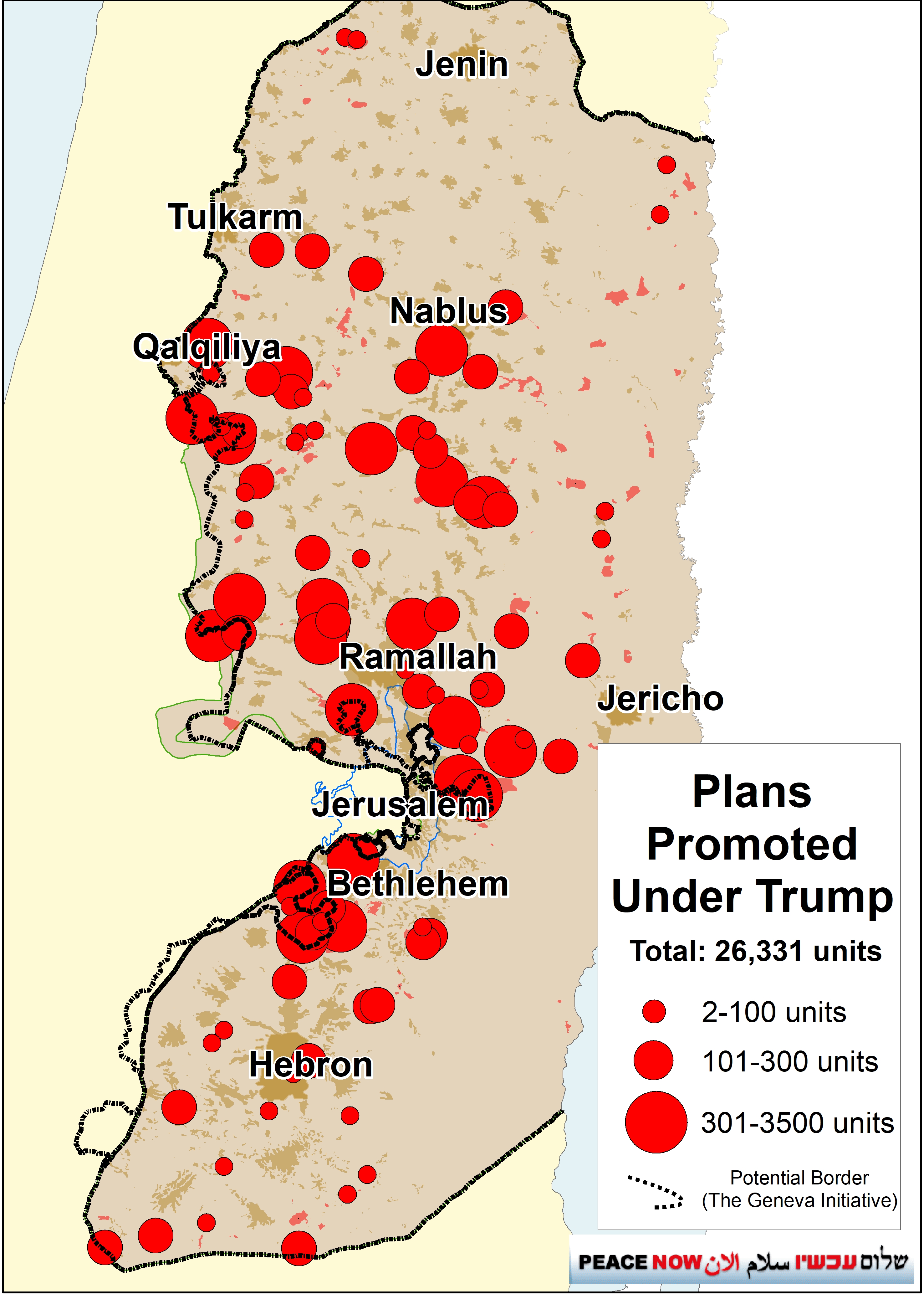 Impact of the Trump Administration on the Settlements

On the evening of November 1, 2020, soon before the U.S. presidential election, an unusual event took place in Hebron: dozens of settler leaders and heads of settlement authorities gathered in the Cave of Patriarchs in Hebron to pray for Donald Trump’s success in the upcoming election. Though this event was unusual, it was not surprising. In fact, it is expected that settlement leaders would wish for his success. Trump’s four years in office allowed settlers to achieve meaningful changes in terms of policies and facts on the ground.

The Deal of the Century

Trump began his term with the declaration of his intention to propose “the deal of the century,” a deal that would solve the conflict between Israel and Palestine. Immediately afterwards, he took a series of steps, unprecedented in American policy, that reflected the essence of his plan: to remove the two-state solution from the agenda. Trump’s position on three issues at the core of the conflict was:

The “Trump Plan,” finally presented in January 2020, does not even include the vision of a viable Palestinian state alongside Israel, but instead suggests a sort of minimal autonomy for Palestinians without territorial contiguity, without independence, and without significant powers.

The American president does not set Israeli policy – the Israeli government does. That said, the American government does have significant influence on Israeli policy, especially on non Israel-internal issues which have regional and international implications, such as settlement policy in the occupied territories. Unlike previous American administrations, the Trump Administration has almost completely refrained from criticizing Israel’s settlement policies and has even supported statements and actions that further develop the settlements.

Importantly, settlement development is not simply a matter of how many housing units are built, but also depends on the location of construction, the development of infrastructure, and the legal changes that enable Israel to deepen its control over the territories. In the past four years, there have been substantial changes in the “rules of the game” of settlement policy. Projects and construction have been promoted in areas where settlements are particularly destructive to the prospects of peace and the two-state solution.

Along with increasing settlement activity, there has also been a significant increase in the demolition of Plaestinian homes – in 2020, a record number of homes were demolished in the West Bank and East Jerusalem.

The eviction of Palestinians from their homes in East Jerusalem has continued in order to make way for more settlements. Six properties were evacuated in favor of government-sponsored settlers (according to the principle of exercising the “right of return” for Jews), along with 25 additional properties which were evacuated following settlers’ purchase claims. For the first time since 2009, a family was evicted from their home in Sheikh Jarrah for the benefit of settlers.

Plans for Bringing 100,000 New Settlers to Areas that Israel Will Have to Evacuate

Out of 26,331 housing units built in the past four years, 20,629 housing units (78%) are in settlements deep in the West Bank, areas that Israel will be forced to evacuate under a two-state agreement (according to the Geneva Initiative model). This means that the Israeli government has advanced construction to house 100,000 settlers, each of whom will have to evacuate once an agreement is reached.

The construction plans include:

The Infrastructure Revolution Preparing the Settlements to Absorb Another Million Settlers

One of the most important components in settlement development and construction is the road infrastructure. The moment that there are good, safe, fast roads, the settlements along those roads become more attractive and fill up. For example, a Peace Now analysis showed that the opening of the “Lieberman Road” (the road that bypasses Bethlehem on the east) in 2008 led to a doubling in the number of settlers in the area in less than a decade.

In recent years, the Netanyahu government has invested hundreds of millions of shekels in unprecedented road development since the construction of the bypass roads in the 1990s.

Among other things, the construction of significant central routes began with an investment of close to one billion shekels:

Out of the outposts established: 2 outposts were evicted (Migron and Amona); 23 outposts were legalized (three as independent settlements and 20 as "neighborhoods" of existing settlements); at least 12 outposts are in the process of being legalized (plans promoted and/or a government resolution). The outposts phenomenon started mainly under Netanyahu as Prime Minister in 1996, and it was stopped in 2005. In 2012 the government of Netanyahu started to established illegal outposts again.

Construction of the Eastern Ring Road in East Jerusalem