If established, the “Geulat Zion” settlement would be the second settlement approved as a result of the Amona evacuation, the first being Shvut Rachel East, as exposed by Peace Now on October 2, 2016. Shvut Rachel East and Geulat Zion are two empty hilltops adjacent to one another, located east of Shvut Rachel. Initially, the establishment of Shvut Rachel East was proposed to the Amona settlers as compensation for their evacuation but they refused to move to the designated site. Nonetheless, the government decided to proceed with the approval process of the new settlement, and a plan for 98 housing units in the area was approved for validation on February 15, 2017.

The illegal outpost of Shvut Rachel, after which Shvut Rachel East is named, is another example of a “neighborhood” which is actually a separate settlement in the Shilo area. It was established in 1991 as an illegal outpost and without approvals. In 2011, as a result of a Peace Now petition, the government retroactively legalized the outpost and recognized it as a neighborhood of Shilo. Geulat Zion and Shvut Rachel East, could soon be joining Shvut Rachel as new settlements under the pretense of being Shilo neighborhoods. It is difficult to ignore the constant move eastwards, in an effort to cut the West Bank from West to East and make the establishment of a future Palestinian state much more difficult.

Finally, it is worth noting that despite receiving official recognition as a neighborhood, Shvut Rachel is currently expanding illegally. Within Shvut Rachel, a new neighborhood named “Shahar Hatzeira” which includes 38 housing units, is currently being established. The undergoing construction in the area does not have an approved plan nor legal construction permits. 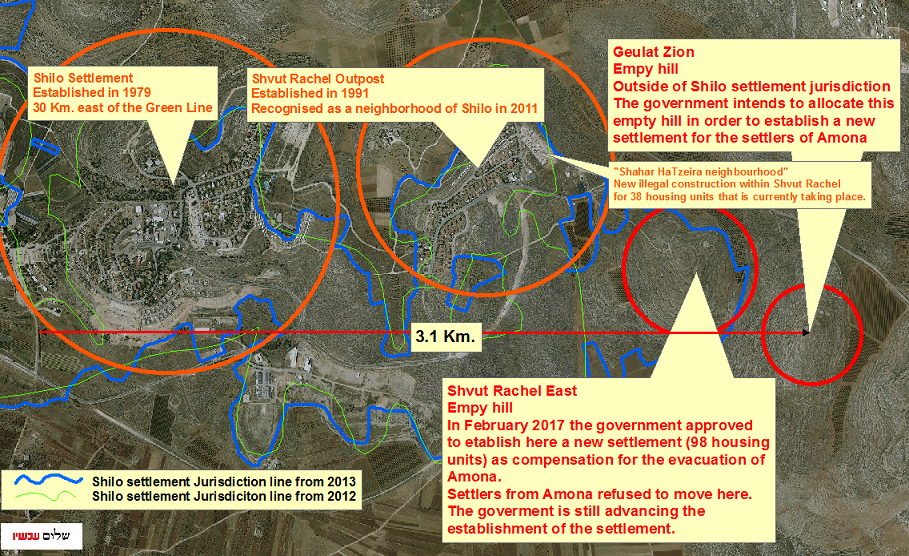