In the past few weeks construction work has begun on the Eastern Ring Road in the section between the Palestinian communities of al-Za’ayyim and Anata. The road, which was begun in the past but never opened to traffic, is built with a separation wall in its middle, with one side designated for Israelis and the other for Palestinians. On the side of the settlers, the road is meant to provide an additional entrance to Jerusalem from the east, to ease traffic congestion and to serve as a development route for the construction in the settlements north of Jerusalem.

On the Palestinian side, the road is supposed to allow Palestinians to travel between Anata and al-Za’ayyim from north to south, and to shorten the travel from the northern West Bank to the south. This road is part of a future road, which, if completed, will allow Israel to build in E1 and divide the West Bank in two on the pretext that the road provides a solution to the Palestinian need to connect north to south. However, the Palestinian need is not only a question of transportation, but also a question of territory and the possibility to develop the areas at the heart of the West Bank, without which a viable Palestinian state cannot be established.

Peace Now: “While in the United Nations Netanyahu declares that he is extending his hand to peace, on the ground he is working to prevent it. This is the first step towards realizing the government’s plan to annex vast areas of land at the heart of the West Bank that would divide it in two, and takeover the necessary territorial contiguity needed in order to build a viable Palestinian state”. 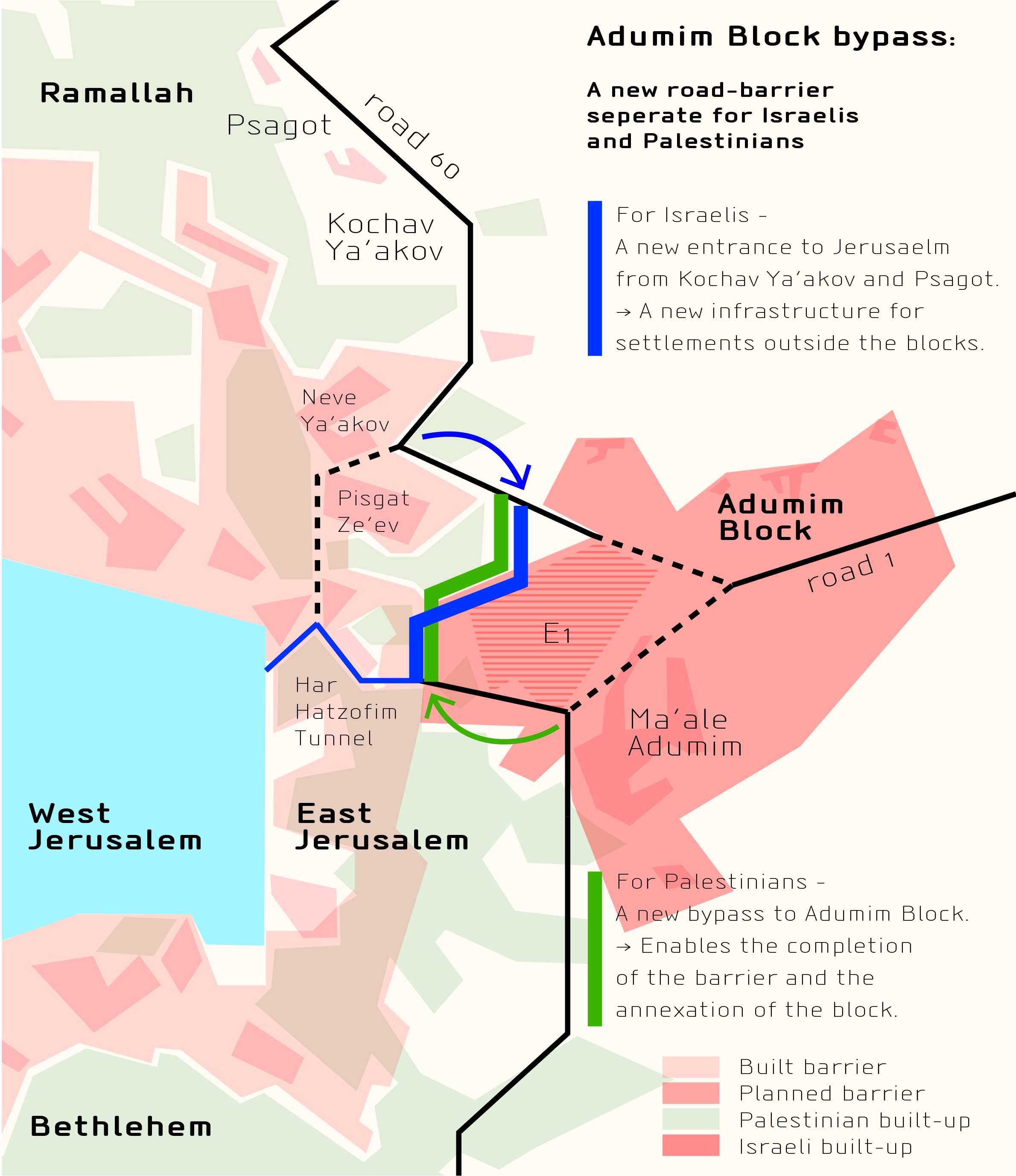 As part of the work on the separation barrier around 2005, a road connecting Al-Za’ayyim and Anata was paved with a high concrete wall running down its middle. Until now, the road was closed to traffic, but in the last few weeks, work had started in order to enable its opening. The construction of a checkpoint had also started near the Border Police base of Metsudat Adumim. The estimated cost of the project is 50 million NIS.

At the same time, work on a new ramp has begun to allow the traffic from Anata to turn west into Jerusalem through the Naomi Shemer Tunnel to Mount Scopus. The estimated cost of the project is 40 million NIS. The connection of the two roads will enable settlers from the area north of Jerusalem to enter the city and ease the congestion at the Hizma checkpoint and Pisgat Ze’ev. 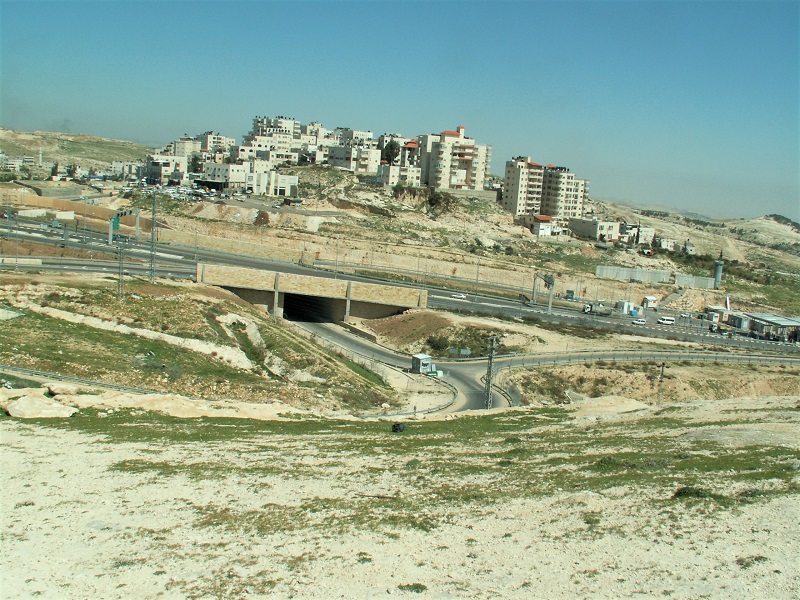 The meaning of the road

The two-state solution depends on the possibility of establishing a viable Palestinian state alongside Israel. The heart of the future Palestinian state, geographically, economically and culturally, is in the metropolis between Ramallah, East Jerusalem, and Bethlehem. The only potential development areas remaining for this metropolis are the areas east of Jerusalem, the same area where Israel seeks to build the E1 settlement and create an Israeli territorial contiguity from Jerusalem to the east that will divide the West Bank into two.

If the road will be completed and its southern part built, connecting Al-Za’ayyim to Al-Azariya and Abu Dis, Israel will be able to argue that Israeli construction in the area does not separate the West Bank because there is a transportation route for Palestinians. This argument, of course, is baseless because a thin line of road that connects separated territorial sections (creating “transportational continuity”) does not meet the need for the territorial contiguity essential for the development of East Jerusalem and the Palestinian metropolis. Without these territories, a viable independent Palestinian state cannot be built and prosper, and this could mean the death of the two-state solution. As far as Peace Now knows, the plan to complete the road from al-Za’ayyim to Al-Azaryia is not being promoted. 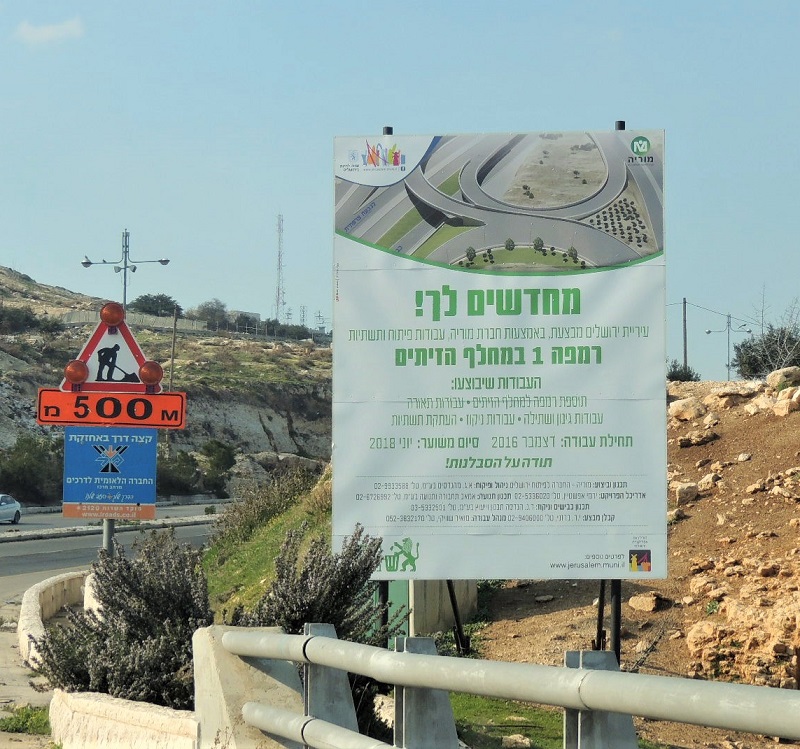 The works for the new ramp at the Zeitim Interchange. 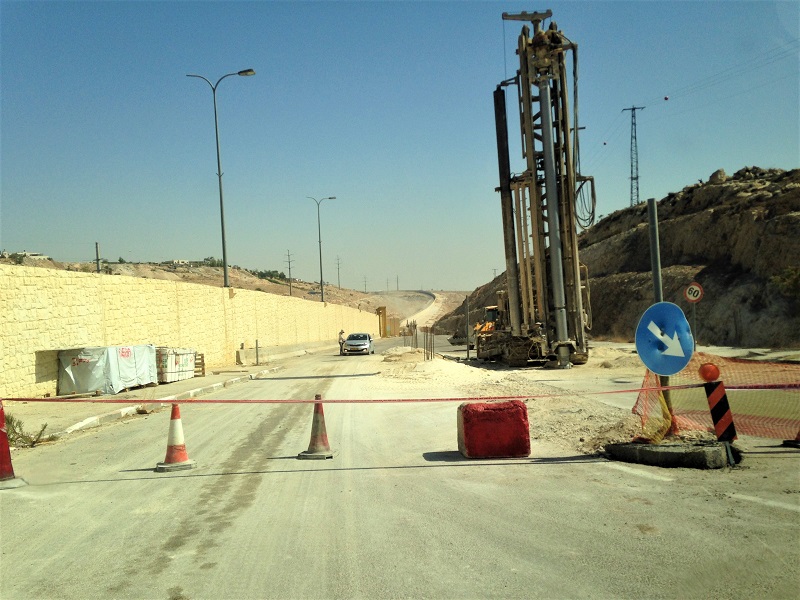