On 20 February 2020, Prime Minister Netanyahu announced the approval of construction in Givat Hamatos and the approval to advance planning for the expansion of the Har Homa settlement in East Jerusalem. Construction in Givat Hamatos will severely hamper the prospect of a two-state solution because it will ultimately block the possibility of territorial contiguity between East Jerusalem and Bethlehem, and in particular will prevent Palestinian Beit Safafa from connecting with a future Palestinian state.

Construction in Givat Hamatos is considered a red line among many, and in the past, the promotion of the plan has led to sharp international condemnations. Exposed by Peace Now, the approval of the plan in September 2014, cast a shadow on the Obama-Netanyahu meeting in Washington.

Peace Now: “Construction in Givat Hamatos is a serious blow to the two-state solution. This is the last point enabling territorial continuity between Bethlehem and East Jerusalem. A transitional government has no mandate to take such a far reaching policy change. Netanyahu and Trump claim to have advanced a “peace plan,” but Netanyahu’s actions, including promoting this expansion, are clear proof that he is doing everything to prevent peace and a resolution to the conflict.” 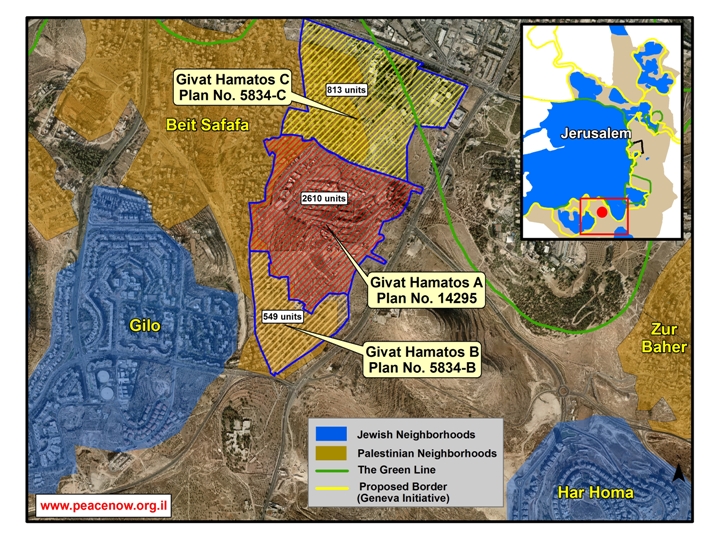 The Approval of Givat Hamatos is for immediate implementation; If not stopped – construction may start within two years

Plan # 14295 – for the construction of 2,610 housing units (this is the plan that Netanyahu referred to in his announcement as “3,000 units for Jewish residents”). The plan was approved for validation as early as 2014. Because the plan is mostly on public land (“state land”), the construction is implemented through tenders published by the Ministry of Housing, where contractors are invited to submit bids for the purchase of construction rights. Until now, Netanyahu has prevented the publication of tenders. Today’s announcement likely indicates that tenders will be announced soon. It usually takes several months from the publication of a tender until the election of the winning bids, and then it takes another few months for the contractors to issue construction permits. Therefore, if the tender is not stopped, within a year or two we may see the bulldozers on the ground.

Plan # 5834-C – for 805 housing units on private land, mostly Palestinian owned. The plan was frozen and still not approved for validation (objections to the plans were heard as early as 2013, but since then the Jerusalem District Planning Committee has not convened to approve the plan). Netanyahu’s announcement signifies that the plan is likely to be approved for validation soon, and after that, landowners will be able to initiate construction permits on their land. This is probably the “1,000 units for Arab residents of Beit Safafa” that Netanyahu referred to.

Plan # 5834-B – for 549 housing units that was validated in July 2016. The plan is in the built-up area of ​​Beit Safafa and mainly allows the addition of more units to existing Palestinian structures. The plan is already in effect.

Plan # 5834-D – for about 1,100 hotel rooms. The plan was published for objections as early as 2013 but has since been frozen. The landowners, probably Israeli entrepreneurs who purchased the land from the Greek Orthodox Church, sought to change the zoning from hotel rooms to housing. Netanyahu apparently did not address this plan in his announcement.

The Plan at Har Homa

In Netanyahu’s announcement, he supported a plan for 2,200 housing units in Har Homa. This plan is still in the preparation stages and has not yet been discussed by the planning institutions. Apparently, Netanyahu has now a green light to start the approval process of the plan.

This is likely a plan to extend Har Homa to the west toward Givat Hamatos, reducing the margin for a potential Palestinian continuity between Jerusalem and Bethlehem.

Notably, Netanyahu said in his statement that Har Homa has 40,000 residents, but in fact, according to the latest CBS data as of the end of 2018, Har Homa had only 24,000 residents. It may be Netanyahu’s mistake or exaggeration, or both.