A few hours ago, Peace Now learned that the construction company “Shemini Properties” will hold a cornerstone laying ceremony tonight for the construction of hundreds of new housing units in the Nof Zion settlement, and that the mayor is expected to attend the event. Peace Now addressed an urgent call to the Mayor of Jerusalem, Moshe Leon, not to participate in the inauguration of the second phase of the Nof Zion settlement in the heart of the Palestinian neighborhood of Jabal Mukaber:

We address you with an urgent call: Please refrain from participating in the inauguration event of the second phase of the “Nof Zion” neighborhood in Jabal Mukaber tonight!

The Nof Zion neighborhood is an Israeli settlement in the heart of the Palestinian neighborhood of Jabal Mukaber, whose entire purpose is political-ideological, which harms the delicate fabric of Jerusalem and the chance of ever reaching peace in the city. The holding of the ceremony tonight, precisely at such a sensitive time in Jerusalem, against the background of a round of severe violence that has not yet calmed down on the streets of Jerusalem, is a real provocation. We ask you not to give a hand to the provocation and not to attend the ceremony.

Nof Zion is a failed settlement project in the heart of the Palestinian neighborhood of Jabel Mukaber. The first incarnation of the settlement proved that the vast majority of Israelis are not interested in buying houses in the heart of Palestinian neighborhoods and the only ones willing to live there are a minority driven by ideological motives. It so happened, as is well known, that in the end the entrepreneurial company of the project went bankrupt. The fact that the current project is funded by philanthropists is the clear proof that the new project has no economic or real estate interest and does not constitute anything in line for the city’s residents, but only another political attempt to prevent the possibility of compromise and coexistence in Jerusalem.

To read the full letter to the mayor [in Hebrew], see here. 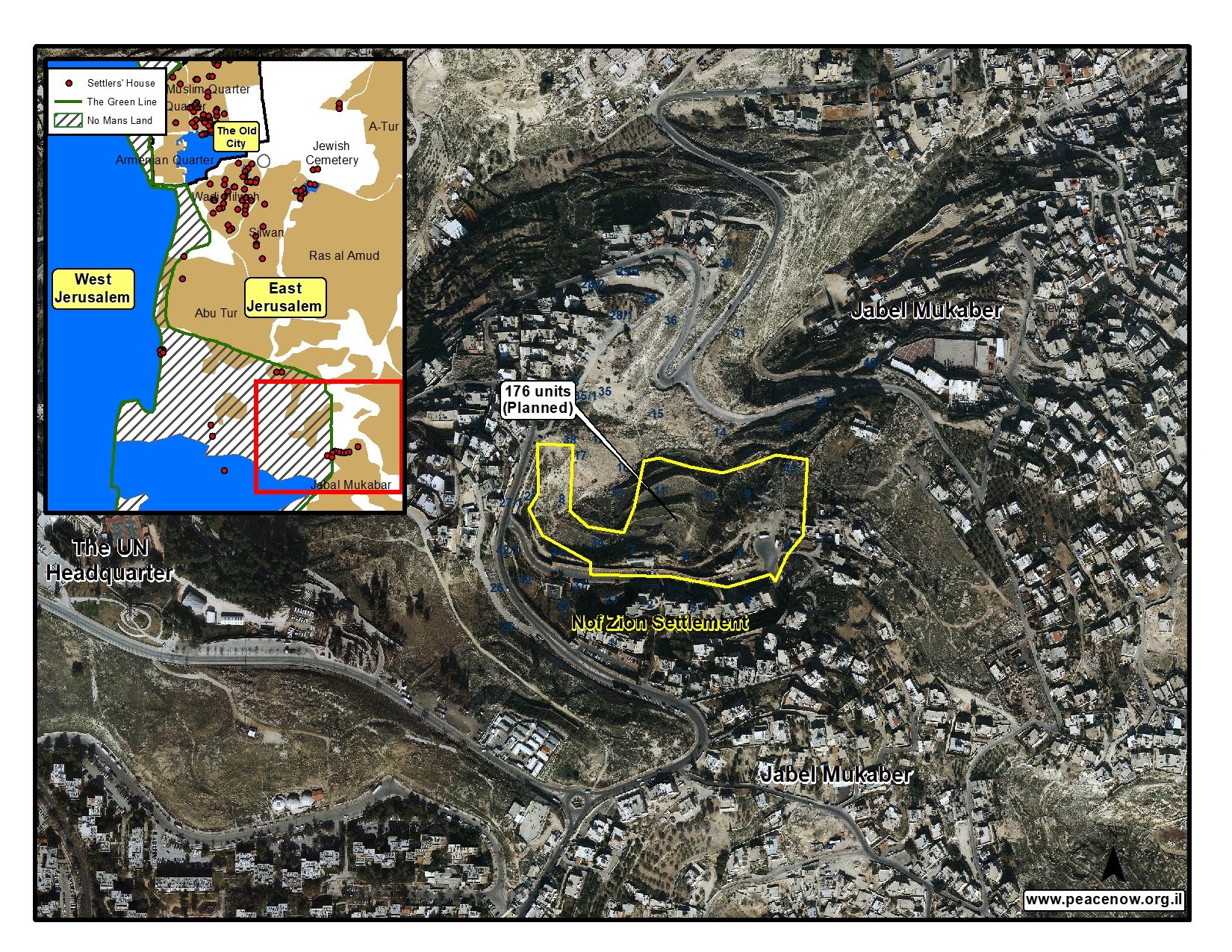 Background: The Nof Zion settlement in the heart of the Palestinian neighborhood of Jabel Mukaber

About thirty years ago, Israeli developers succeeded in purchasing a plot of land from Palestinians in Jabel Mukaber, on which they initiated the construction of a neighborhood of luxury apartments called Nof Zion. In 1994, Plan No. 4558 was approved for the construction of 395 housing units and several hotels. In the early 2000s, construction began on Phase A of the project – the Nof Zion neighborhood with about 95 housing units. The project ran into difficulties because it turned out that luxury apartments in the heart of a Palestinian neighborhood were unattractive and the only people who wanted to live in it were ideological settlers and not necessarily well-to-do. The entrepreneurial company went bankrupt and negotiated the sale of the rights to a Palestinian-owned company. Settlers recruited Australian billionaire Kevin Braimster and Israeli entrepreneur Rami Levy, who raised the amount needed to acquire the rights to the project and prevented its transfer to Palestinians. Today, about 90 religious families live in the neighborhood, and the Jerusalem municipality recently invested about NIS 15 million in building synagogues, a mikveh and playgrounds for the neighborhood.

The construction potential in the neighborhood is close to 400 housing units in total (including the 95 built). In 2016, a company called Shemini Properties Ltd., which owns significant parts of the area, submitted applications for a building permit for the construction of 13 buildings, including 176 housing units, some of which have already received a building permit and have begun infrastructure work in the area. An additional 100 units as well as a hotel are also planned. It should be noted that in order to allow the hotel to be built, the Israel Police agreed to evacuate the Oz police station, and it will be rebuilt on a nearby site – on land expropriated from Palestinians in 1970.